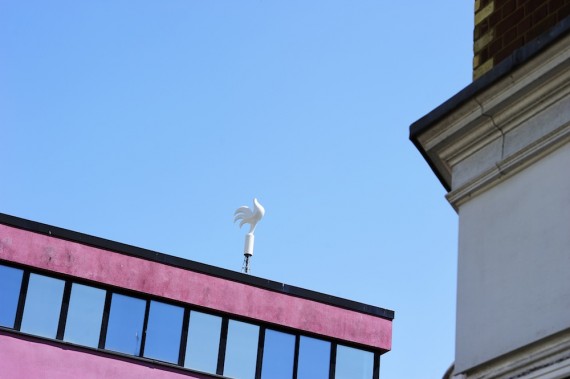 Arriving at Folkestone Central Station you’re greeted by a big lime green triangle. The motif continues on the floor leading to the pavement outside, where Yoko Ono’s billboard message confronts passengers with the words: ‘Earth Peace’. The message is repeated on a ground plaque at the other end of town outside The Grand hotel, and in between are 20 other newly commissioned artworks sited throughout Folkestone, helpfully marked by more green triangles.

This is the third Folkestone Triennial and the first under new curator Lewis Biggs, formerly director of the Liverpool Biennial. He has worked with partners Strange Cargo, Situations, Turner Contemporary, UP Projects and Canterbury Christ Church University to realise the exhibition.

Selected artists include Andy Goldsworthy, Pablo Bronstein, Alex Hartley and Tim Etchells, and artforms include sound, installation, sculpture, film, print, text, architecture, light and the utilisation of digital technologies. Each work is distinct and complete in itself, but together they add up to an extraordinary collection of thoughtful artworks, carefully sited, reflecting not just the town but the current modes and concerns of visual artists.

Whithervanes: a Neurotic Early Worrying System aims to tap in to our individual and collective anxieties. Made visible by the siting of five sculptures of headless chickens, which rotate and change colour as the project monitors newsfeeds for alarmist keywords, the public are invited to participate in the artwork via @whithervanes.

In one room, red arms extend as if out of the walls, carrying black clipboards. Two reflective ‘eyes’ positioned above each arm reflect unexpected images of urban and rural scenes, hinting at an inner life and freedom not obvious from external appearances. The eyes are the windows to the soul perhaps?

Andy Goldsworthy has made several works in Folkestone, all of which interact with the urban and coastal environment and continue his fascination with natural forms, textures and ephemeral interventions. Clay Steps, Clay Window is installed in a shop, two time-based works that alter as the clay dries.

In another shop unit, Goldsworthy displays documentation of several works. These include Rain Figure, in which rain outlines the dry place where his body has lain on the street, shown evaporating through time-lapse photography; and Poppy Stone, referencing Folkestone’s role as departure and entry point for ten million solders during the first world war.

Amina Menia’s sound work is quietly touching. Installed in an empty lot, it commemorates the death of 60 people killed by a bomb in 1917. Menia has asked immigrants to Folkestone to share their bread-making recipes, which are narrated in a rich warm baritone by actor Peter Stern, recalling the tones of a vicar giving a sermon. “Turn it upside down to RISE AGAIN,” he intones, as if food was our new religion.

Looking down on Menia’s work is the enormous undertaking by muf Architecture/Art, who are transforming the steep 7000 square metre Payers Park area into a new public space. The legacy of this project will provide a permanent new public park in the town, which will be maintained by Shepway District Council.

Other highlights include the inspired Folkestone Digs, in which Michael Sailstorfer has buried 30 gold bars worth £10,000 under a part of the beach accessible only at low tide. Produced by Bristol’s Situations and kept under wraps until the Triennial opened, the work has attracted widespread media coverage – the public is invited to hunt for this buried treasure and keep what they find.

Pablo Bronstein’s playful Beach Hut in the Style of Nicholas Hawksmoor is perfectly sited next to some charming and traditional ice-cream coloured beach huts. Alex Hartley and volunteers are perched precariously over the edge of the Grand Burstin Hotel, 13 floors above the ground, in Vigil. ‘Lookout’ is the theme of the Triennial and this work literally does that, while also referencing the Occupy movement and the idea of holding a vigil.

Gabriel Lester’s The Electrified Line (Cross-track Observation-deck) also provides a space to look out of. An enormous bamboo structure complete with windchimes, it is situated on the old Harbour Railway Viaduct, giving spectacular views and creating a calming alternative space.

The Triennial also has its own fringe festival, the Folkestone Fringe. Presented in two parts, it features a curated programme called Future Now, with 20 projects by over 80 artists in a range of public, private and liminal spaces; artforms include soundworks, performance and live art. There is also the Open, a new, inclusive, non-curated platform which gives artists from all disciplines and backgrounds the opportunity to show work in the town for the duration of the triennial.

This is a noteworthy Folkestone Triennial, full of interesting works and attention to detail. Biggs has created, with partners, an art trail of exquisite quality mapping the town. By taking this walking tour, visitors not only discover the art of Triennials present and past, but discover the nooks, crannies and attractions of Folkestone itself.