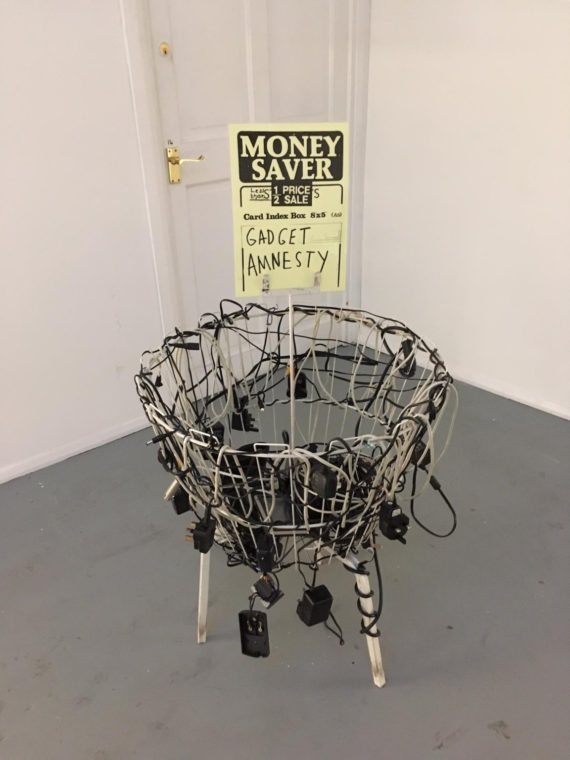 It’s been a busy few days on the a-n Instagram with the a-n team out and about at fairs and events taking place in London during ‘Frieze Week’.

Stephen Palmer took a look at the launch of the sixth edition of Art Licks Weekend, which has this year moved from its usual September slot.

Focusing on London’s artist-led and non-profit spaces, its organisers describe the event as ‘an alternative to competitive object-based narratives’. 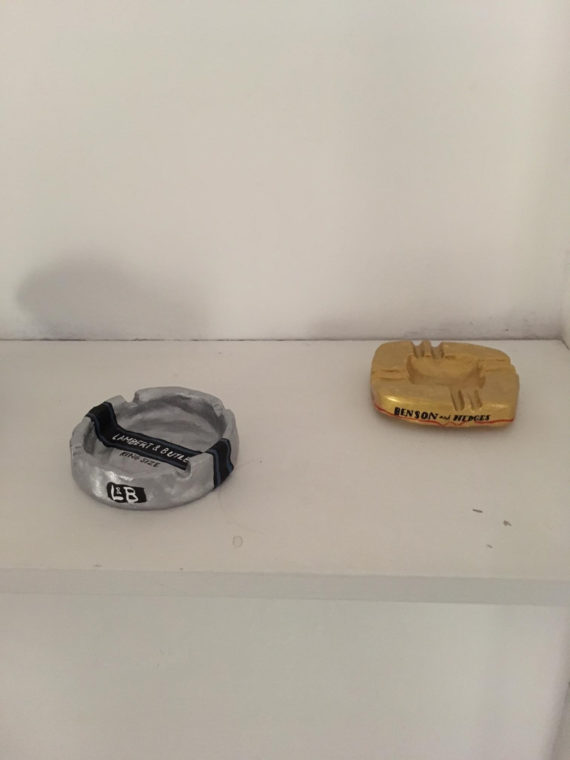 This is Stan Welch’s Big Plans included in Creekside Projects’ exhibition Labour Exchange which showcases the work of 10 emerging artists who helped with the construction of Creekside Artists’ new studios and project space in Deptford. During a period of flux this summer the artist-run studio provider decided it would utilise skills from within its own artist networks to enable it to relocate to a more secure tenancy on Creekside in Deptford. Labour Exchange celebrates the work of 10 emerging artists who worked on the project. @creeksideartists @artlicks #anfriezeweek2018 #friezeweek #friezeweek2018 #visualart #contemporaryart #artistrunspace #artistrun #artistled #art #artist #artstudio #london #friezeartfair #labourexchange 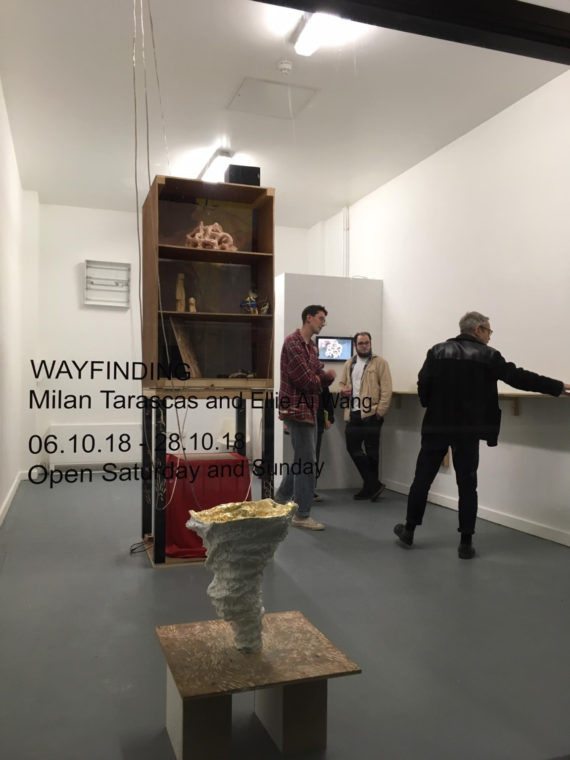 The exhibition will officially launch when Wang and Tarascas arrive at the gallery after leading a procession, which begins at San Mei Gallery in Brixton at 4pm today (Friday 5 October).

It’s a good Focus section this year @friezeartfair but I really should move on now, so much to see. Here’s a series of three lovely, intriguing and slightly mysterious gouache on cardboard paintings by Louise Sartor at Galerie Crèvecoeur as a parting shot from Focus (for now at least). #frieze #friezeartfair #friezeweek #friezelondon #painting #architecture #buildings #anfriezeweek2018

Chris Sharratt was posting from the main Frieze London art fair during a busy day of booth-hopping.

He was particularly impressed with this year’s Focus section (for galleries under 12 years-old), which he headed to first. Small gouache on cardboard paintings by Louise Sartor (above) were one of his highlights. 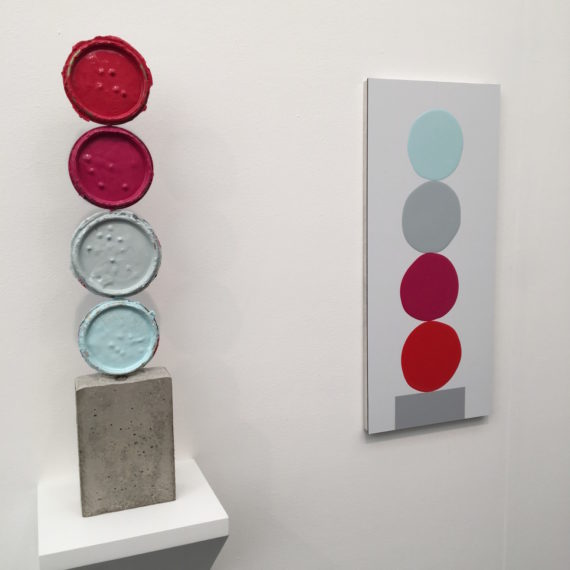 Other works posted on Instagram include two pieces by David Batchelor at Edinburgh’s Ingleby Gallery, the small sculpture Geo-Concrete 03 exhibited alongside the wall-based Multi-Colour Chart 24. 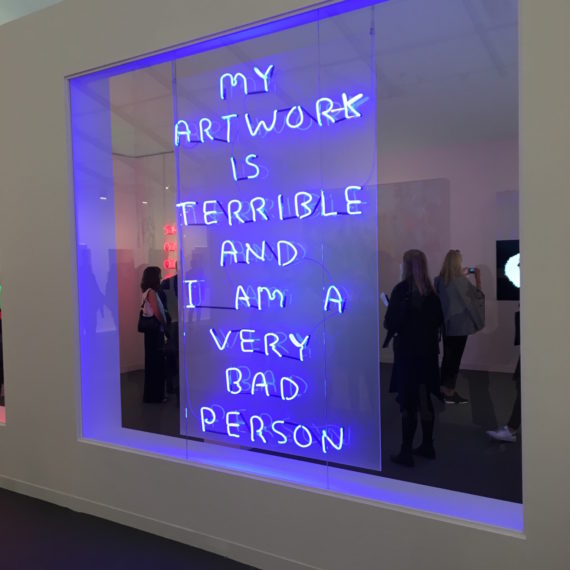 Chris signed off from Frieze London with images from David Shrigley’s very funny solo presentation at Stephen Friedman Gallery. (You can read the a-n News review of Frieze London here) 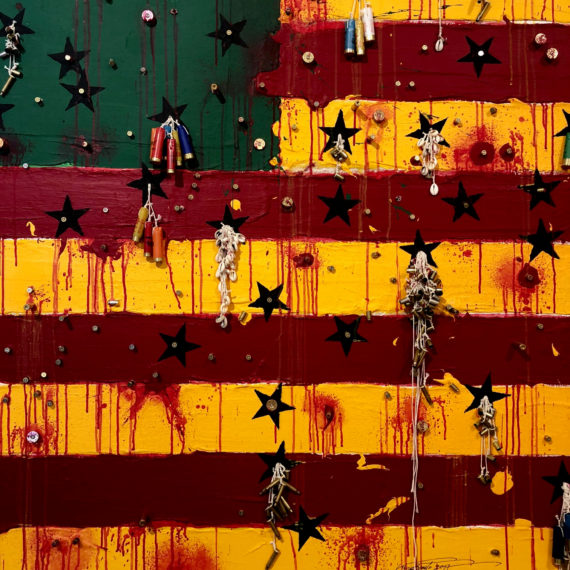 Drawing reference to the 54 countries that constitute the African continent, the event showcases 43 international galleries presenting over 130 African and African diasporan artists.

Galerie Nathalie Obadia is showing work by multidisciplinary artist Nú Barreto, who explores the ‘universality of poverty, violence and corruption’.

Also on display at @154artfair is an immersive installation by British-Ghanaian artist Larry Achiampong. The work explores Christianity’s role in colonialism and diasporic communities living in the West. #154artfair #friezeweek #friezeartfair #friezelondon #anfriezeweek2018

Other highlights from the fair include British-Ghanaian artist Larry Achiampong‘s immersive installation Ain’t No Place Like Home.

The work explores ‘syncretism in religion and domesticity in diasporic communities living in the global West and the dynamics that unfold through the complex amalgamation of beliefs and cultures’.

More from @jerwoodjva Survey launch – Happy Happy Leaf by Rae-Yen Song who was nominated for the exhibition by Rachel MacLean. This kinetic sculpture draws on strands of the artist’s identity as a female Chinese Scot, looking at the particularities of Chinese and Scottish cultures. #anfriezeweek2018 #friezeweek #friezelondon #jvasurvey

Hannah Pierce also visited the Jerwood Space in Southwark for the launch of ‘Survey‘, featuring work by 15 early career artists from across the UK.

It is the largest review show in Jerwood Visual Arts’ 12 years of programming.

More from @jerwoodjva Survey launch… ‘Arpeggios’ by Emma Cousin (nominated by Emma Hart). These mixed media drawings gesture towards an alternative view of women’s experience of their bodies and the interrelatedness of physical and social mobility. #anfriezeweek2018 #friezeweek #friezelondon #jvasurvey

Our final post from the launch of Tania Bruguera’s Turbine Hall commission at Tate Modern. This is the image that lies beneath the heat-sensitive floor and which will be revealed by visitor’s collaborative actions. It’s a portrait of Yousef, a young man who left Syria in 2011 and found emotional and practical support through SE1 United, the charity that Natalie Bell helps to run. Bell selected his image as one which best reflects the work she has done. #anfriezeweek2018 #friezeweek #friezeweek2018 #visualart #contemporaryart #tatemodern #turbinehall #TaniaBruguera #arteutil #tateneighbours

At the beginning of the week, Stephen Palmer visited the opening of Cuban artist Tania Bruguera’s community-led response to the global migration crisis at Tate Modern’s Turbine Hall.

The work includes a heat sensitive floor that will reveal a portrait of a young Syrian refugee, Yousef, if enough people collaborate together by using the heat of their bodies.

More from the launch of Tania Bruguera’s Tate Modern Turbine Hall commission. The work responds to the crisis in migration by focusing on the status of the neighbour and what it means to act and interact locally. This will be achieved through number of stealth interventions in the Turbine Hall and the institution around it. One of these is a heat sensitive floor through which visitors working together can reveal a portrait hidden beneath the grey floor. This is accompanied by a low frequency hum created in collaboration with sound artist Steve Goodman that charges the space with an ‘unsettling energy’ #anfriezeweek2018 #friezeweek #friezeweek2018 #visualart #contemporaryart #tatemodern #turbinehall #TaniaBruguera #arteutil #tateneighbours

There’s also a low frequency hum that fills the Turbine Hall and charges the space with an ‘unsettling energy’, created in collaboration with sound artist Steve Goodman. In a side room off the main Turbine Hall, an organic compound in the air induces tears and provokes what the artist describes as ‘forced empathy’.