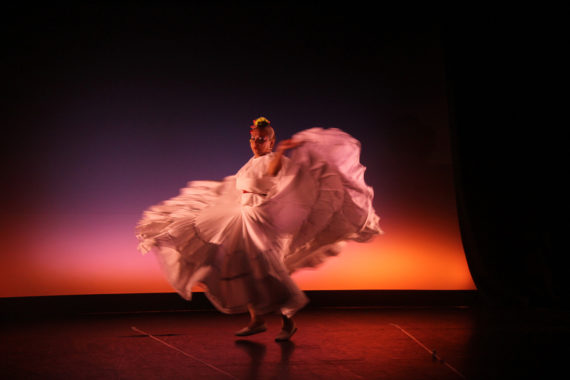 Later this year, Gasworks will launch two consecutive eight-month artist residencies where the selected artists will develop a project in collaboration with migrant communities in the area. In addition, over the next two years the organisation will also run workshops, commissions and events, which will widen access to contemporary art for its local community.

The programme follows a pilot project that Gasworks ran last year. Artist and filmmaker Seth Pimlott worked with the Polish and Latin American communities in Lambeth to produce two films exploring their histories of migration, ancestral heritage and cultural identity.

Golden statue of Turkish president Recep Tayyip Erdoğan removed from Wiesbaden biennial of contemporary art The artwork, whose author has not been revealed, depicted the Turkish head of state standing with his right arm raised and his finger pointed. Installed in the German city’s Platz der Deutschen Einheit, German Unity Square, it was similar to the statue of Iraqi dictator Saddam Hussein that American forces brought down during the US invasion of Iraq in 2003.

The statue quickly became a target for graffiti, with phrases spray painted on it including ‘Turkish Hitler’. Although initially officials issued a statement saying the statue would remain in place ‘in the name of artistic freedom’, they then changed their minds after 100 officers had to be assigned to the site to keep the peace following clashes between supporters of the Turkish leader and his opponents.

»Artists put up a golden statue of Turkey’s leader in Germany to spark a conversation. It worked. Too well.«https://t.co/4wb3zfg2SC

Biennial director Uwe Eric Laufenberg criticised the city’s decision to remove the work based on financial costs, saying the statue offered an important focus for debate. In a statement posted on the biennial’s website, he said: “In Turkey this is not possible at the moment, as critics of Erdogan are threatened with prison, and a free press and art practice in Turkey is currently scarcely possible.”

Portrait of Nigel Farage fails to attract a single bid at Royal Academy summer exhibition The painting of the former Ukip leader, by Welsh artist David Griffiths, was priced at £25,000, but failed to sell. Well known for his depictions of other famous faces, including the Prince of Wales and former primer minister, Lord Callaghan, the artist decided to paint Farage following a suggestion by a mutual friend.

Responding to the work’s failure to sell, Griffiths told the Sun: “These things ebb and flow. Prices of paintings, like everything else, aren’t set in stone. It would certainly be gratifying if Nigel’s portrait were to find a good home.”

He added that, no matter what people think of Farage, “he is a major figure. He’s Mr Brexit, isn’t he?”

British Council wins funding for youth-led heritage project New grant worth over £868,000 from the Heritage Lottery fund’s Kick the Dust programme will help hundreds of young people explore the shared cultural heritage of the UK and South Asia. They will then influence museum programmes, including developing new methods for them to engage with people.

Dana MacLeod, British Council, director arts, South Asia, said: “We believe that around four million British people are able to trace their heritage to South Asia. This generous grant will offer young people – from a wide range of different backgrounds – the chance to explore their identity and belonging in today’s world.

“Supporting a cohesive society by connecting people through the culture they share is central to the British Council’s work. This is especially relevant in British cities with prominent South Asian roots offering a rich cultural, political and economic history to explore.”

Giant Sadiq Khan balloon to fly over London The bikini-clad, 29-foot inflatable will be flown over London on 1 September, with organisers raising more than £58,000 to pay for it as part of a campaign seeking to remove Khan from his post as London mayor.

On their crowdfunding page, the group said: “”Under Sadiq Khan, we have seen crime sky rocket to unprecedented levels. People in London don’t feel safe and they aren’t safe, 81 murders this year alone! Khan Out.”

However, the balloon can also be seen as a direct response to the recent Trump baby balloon protest, which coincided with the US president’s visit to the UK.

At the time, Khan defended the flying of the blimp, with a spokesperson saying: “The mayor supports the right to peaceful protest and understands that this can take many different forms. His city operations team have met with the organisers and have given them permission to use Parliament Square Garden as a grounding point for the blimp.”

Explaining their stance on the latest balloon, the mayor’s office said: “As always, City Hall has been working in very close coordination with the Metropolitan Police and other key agencies to ensure this protest is able to be carried out in a safe and secure way.”