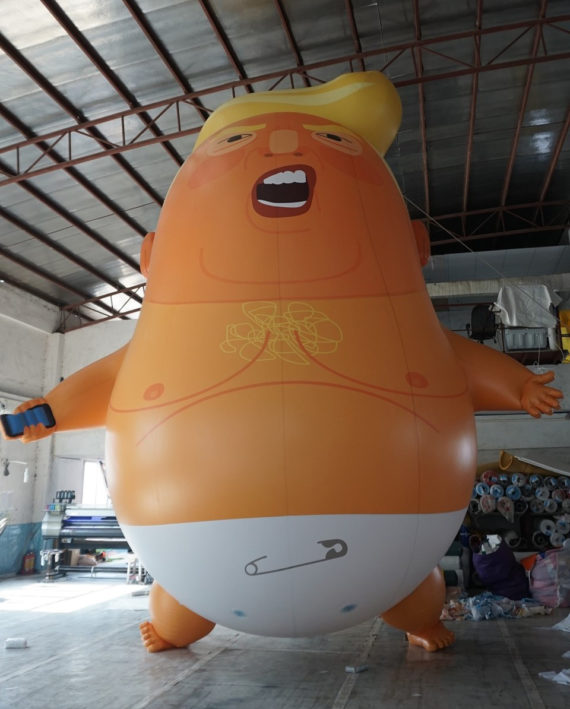 London mayor Sadiq Khan approves ‘Trump Baby’ flight request Greater London Authority has given the green light to allow a giant balloon nicknamed ‘Trump Baby’ to fly near parliament during the US president’s forthcoming UK visit. It will coincide with a ‘Stop Trump’ march being organised for central London on 13 July.

A spokesperson for the Mayor of London told Sky News: “The Mayor supports the right to peaceful protest and understands that this can take many different forms. His city operations team have met with the organisers and have given them permission to use Parliament Square Garden as a grounding point for the blimp.”

A group who call themselves ‘anti-fascist art activists’ successfully raised £16,000 to pay for the six-metre inflatable. Activist Leo Murray said: “Following a huge groundswell of public support for our plan, it looks like City Hall has rediscovered its sense of humour. ‘Trump Baby’ will fly!”

However, not everyone has been supportive of the move. Khan has faced heavy criticism from Piers Morgan on Good Morning, Britain, with the presenter asking “would you endorse a flying black baby of Obama?”

The group organising the protest say they hope to take ‘Trump Baby’ on a world tour following the president’s visit. 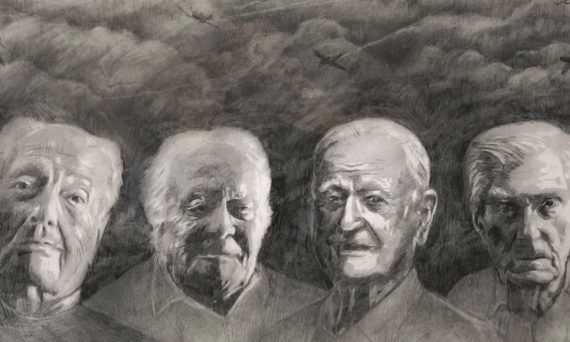 Artist’s sketches of RAF’s last surviving second world war airmen to be auctioned to raise funds for air cadets Jeremy Houghton has created the works to mark the centenary this week of the founding of the RAF. The portraits, which include The Last of the Few, depicting the surviving Battle of Britain pilots, and The Last of the Many, which features the remaining bomber airmen, will be auctioned online to raise funds for the RAF air cadets.

Speaking to the Guardian, Houghton said: “My hope was simply to try and capture, in the uncomplicated and straightforward terms that they prefer, the sense of service, courage and bravery they showed.”

In order to create the works, he used wax pencils similar to those used by the navigators to track the routes for the missions on laminated maps. These would then be wiped clean and reused if the crew made it safely back to base.

New York gallery MoMA PS1 sued by curator after rescinding employment offer after learning she had a child Nikki Columbus, who is the former executive editor of Parkett Magazine, alleges that she was officially asked to join the institution as curator of performance in August 2017, with a view to taking up the post in September. Although she didn’t explicitly state that she was pregnant, Columbus claims that she had face to face meetings with staff at the museum – including its director Klaus Biesenbach and the museum’s chief curator Peter Eleey – up to a week before the birth.

However, Columbus says that when she then told Eleey that she had a baby, he ‘seemed shocked’ and asked why she had chosen to not disclose that she was expecting. Shortly after, the museum allegedly rescinded the offer saying it was ‘unable to tailor the position to the terms that she proposed’.

As Artforum reports, in response PS1 released a statement saying: “MoMA PS1 is committed to a work environment in which all applicants and employees are treated with respect and dignity.”

£4.5m lottery award for Thomas Gainsborough museum The house in Sudbury, Suffolk, where 18th century portrait and landscape artist Thomas Gainsborough was born will become a national centre for the display and study of his work. It will also explore the links to his contemporary, John Constable.

Mark Bills, director of the museum, told the Guardian: “The announcement is such a boost for the arts nationally, for a market town, a county and for helping to open the doors to this wonderful place for everyone.”

Although the Grade I-listed building has been a museum since 1961, the award will help create the first proper display space for the permanent collection and loan exhibitions of Gainsborough’s work, plus a new café overlooking the site’s garden. In addition, designer and artist Nicole Farhi has created a bronze sculpture of Gainsborough for the museum following a donation from US Vogue editor-in-chief Anna Wintour.

As the Art Newspaper reports, the Ninth Circuit Court of Appeals has ruled that the state law conflicts with the federal Copyright Act, effective 1 January 1978. This means that the 5% royalty could only be applied to secondary market sales made in the narrow one-year window after the CRRA went into effect. Essentially, this means that the act is pretty much ineffective for contemporary artists, or those selling work after 1977.