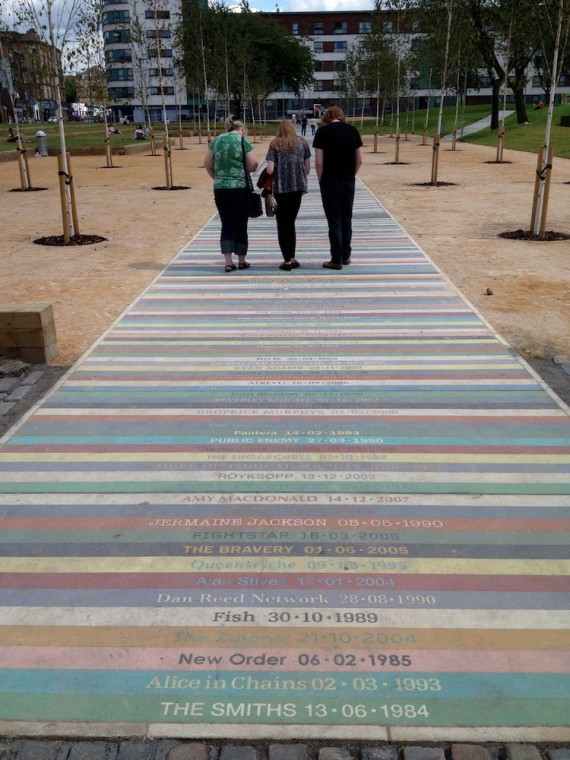 Jim Lambie is not the sporty type, but he has gone the full 100 metres for the Glasgow 2014 Commonweath Games. His Album Pathway is the centrepiece of the temporary Barrowland Park at the gateway to Glasgow’s east end, home to the Athletes Village and many of the Games’ events. Running through the centre of a small landscaped area, it resembles a colourfully striped home stretch.

Like his brand identity for the Games cultural programme, the Glasgow artist’s piece draws on the history of the famous gig venue, Barrowland Ballroom, a stone’s throw away on Gallowgate. Created by setting caste granite letters into pigmented concrete, the three metres-wide path features the names of nearly every act that has played at the Barrowland since 1983, and includes the date they performed.

Arranged to resemble the spines of vinyl records on a music lover’s shelf ­– including a few gaps where albums have been removed for playing ­– its bands of colour recall Lambie’s signature Zobop floor piece. The combination of text and date, meanwhile, is part blue plaque commemoration, part headstone – these gigs are gone but clearly not forgotten.

Shuffling along the path with your head down as you read the band names – New Order, Motorhead, Pixies, The Cure, LCD Soundsystem, Sonic Youth – is an oddly enjoyable way to spend 10 minutes. It helps if the sun’s shining; it was on my visit.

Album Pathway isn’t actually an official Commonwealth Games Culture 2014 commission – it was funded by Glasgow City Council’s Development & Regeneration Services – but it opened just in time for the Games and feels like part of the city’s celebrations.

There’s more celebratory visual arts activity indoors, but while Douglas Gordon’s GOMA show, Pretty much every film and video work from about 1992 until now, is similarly historical, it is considerably darker in mood. Literally, too – the lights are all out in the main ground floor gallery space.

Part of Generation – a series of exhibitions marking the last 25 years of Scottish art – Gordon has created a large island of 101 TV monitors of varying sizes on which 82 works are shown. The result is an audio-visual cacophony, like a multi-tabbed Google video search transported to the gallery realm.

A super-condensed retrospective, it’s intense, gripping, ludicrous, fascinating – and there are plenty of opportunities to play ‘Spot Douglas Gordon’. (There’s his arm, that’s him lying on the floor with headphones on, here he is putting Sellotape on his face. And is that his finger beckoning us in to the exhibition?)

Upstairs at GOMA, light floods Sara Barker’s For Myself and Strangers, another Generation show. Her delicate metal and glass sculptures seem to hover in this white-walled space, anchored by painterly interventions that act like frames to these intricate, fragile-looking constructions.

There’ll be other official parties tonight, too, including Lulu playing at Glasgow Green and Belle and Sebastian at Kelvingrove Bandstand. Both acts, incidently, that have graced the stage at Barrowland.