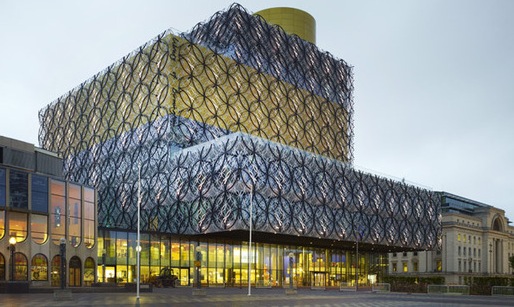 Birmingham City Council has confirmed massive cuts at the recently opened Library of Birmingham, with opening hours at the library set to be slashed from 73 to 40 hours a week from April. Up to 100 jobs are expected to be lost.

At the same time, it has responded to pressure and secured funding of £200,000 to protect ten jobs in the library’s Photography Collections department.

When the new £189m library opened in 2013 it was lauded as a flagship cultural project for the city, but central government budget cuts almost immediately put its services under threat.

In December 2014, the city council put forward a proposal to make £72m of cuts across the city, with major savings at the library including cutting the entire specialist photography archive staff.

In response to the proposals, the photographer Paul Hill launched a petition calling on Birmingham City Council to protect the library’s photography collection, which is recognised as ‘of national and international importance’ and documents the history of both amateur and professional photography in the UK.

Hill stated: “When I and other depositors, who include such renowned British photographic figures as Daniel Meadows, Martin Parr, John Blakemore, Brian Griffin, Vanley Burke, John Myers, Anna Fox, Nick Hedges, and Val Williams, agreed to the library acquiring our archives or collections we were assured that they would be accessible to the public as well as specialist researchers.

“As the proposal currently stands there will be no Photography Collections’ team. Indeed there may not be anyone left with any specialist knowledge of these nationally and internationally significant collections in the near future.”

In January, a letter in The Times from the Royal Photographic Society with over 100 signatories called for the government to step in to protect the collection.

It said that the Photography Collections’ team had attracted “over £1m in external sponsorship to mount exhibitions, acquire collections of international importance, commission new documentary work and undertake the vital cataloguing and conservation work required to make them publically accessible.”

It also stated that the collection had an important outreach and educational role and the Library of Birmingham was “now internationally recognised as a major photography hub, and as a model for the intelligent, integrated presentation of both historical and contemporary photography.”

Describing the proposals as “wholly unwarranted” it said that the cuts and loss of the collection’s specialist staff would “have a disproportionate impact on the region, the UK and internationally.”

The council is also in talks with other institutions, including the British Library, to help secure the future of the Library of Birmingham.

Birmingham City Council cabinet member for culture Penny Holbrook, said: “Talks are ongoing and three or four options are on the table. But they are not at the stage where we felt we could include them in the budget.”

While the future remains bleak for many staff at the library and a raft of important services look set to go, it seems that for the moment at least the Photography Collections’ team is to stay.

However, the current plans only cover the 2015-16 budget period. Speaking when the proposals were first announced, council leader Sir Albert Bore said: “The cuts we have envisaged for 16/17 and 17/18 will be greater.”