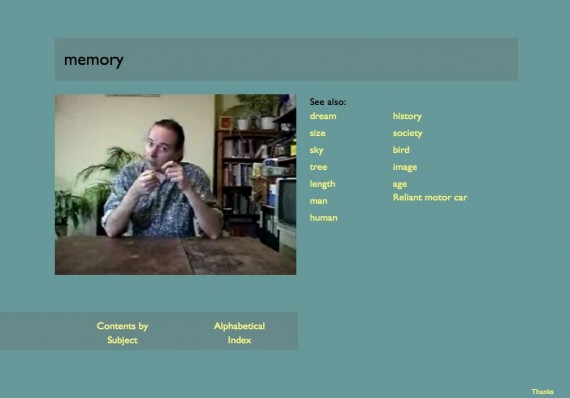 “I’d been working with ideas around the human need to find faith in some things in life, no matter how implausible, and our willingness to suspend disbelief,“ says Alan Currall. “I started to think about the total sum of my knowledge base and world view – how much of this was formed through pub-table conversations and the casual but confident proclamations of the people I’d grown up with. Encyclopaedia was a natural progression of this strand of my practice.”

Currall is discussing his Film and Video Umbrella (FVU) commissioned work, now available online for the first time as part of the organisation’s 25 Frames season celebrating a quarter of a century as an independent organisation.

Originally released in 2000 on CD-ROM – “Whilst I was interested in the possibilities of making work for an online context, in an age of dial-up modems, streaming video online was not an option,” he explains – Encyclopaedia draws upon the ‘not-always-expert’ opinions of the artist’s family and friends, who discuss to camera a broad and diverse range of topics under the subject headings: The Natural World, Society and Culture, Science and Invention, and Atlas.

The huge list of topics discussed includes abstract art, knitting, the Reliant motor car, civilisation and the Common Market, and the contributors were all people Currall had a close personal relationship with. “I travelled the length and breadth of the country to catch up with people, some of whom I’d long since lost contact with,” he says. “There are some people you find in life that if you meet up with them again years later you are still able to just click into synch with. This had a direct bearing on the manner and quality of the contributions – these aren’t the kinds of relationships one makes on Facebook or YouTube.”

While the remastered version of Encyclopaedia has been made for online viewing, much of the 25 Frames season re-presents works from FVU’s archive as live screenings around the country. Forthcoming presentations include works by Phil Collins (Glasgow, 15 November), Carey Young (London, 25 November), Adam Chodzko (Bourn near Cambridge, 7 December) and Graham Gussin (Birmingham, 12 December).

FVU’s Director Steven Bode explains: “We were really keen that our 25th anniversary programme wasn’t just a backward-looking, nostalgic exercise. 25 Frames revisits key works that we’ve commissioned down the years, but does so, I hope, in ways that resonate with the present. Hindsight is a fantastic lens, of course,and it’s been interesting to trace echoes and continuities in certain artists’ practice between works that we made with them a decade or more ago, and preoccupations they are still exploring now.”

Screenings are taking place in a variety of venues, often alternative spaces that provide an atmospheric backdrop to the work, and with the artists present for a post-screening discussion. “Next up we are screening Phil Collins’ marxism today (prologue) in the reverberant architectural setting of Langside Hall in Glasgow, a place steeped in history, and following this with a screening of Carey Young’s I am a Revolutionary in an imposing legal chamber in Gray’s Inn in London. These places, if you like, add a new, one-off ‘frame’ to the works and will, I hope, bring out something fresh, or previously unnoticed in the original.”

Alongside what Bode refers to as “step-change pieces” by now-established artists, the season also highlights influential works by lesser-known names that have taken on a greater significance in retrospect. Because Encyclopaedia only previously existed in what is now an outdated format, and perhaps because of the recent events such as the WikiLeaks and NSA surveillance scandal, it’s a work that holds a particular relevance in the age of Wikipedia and YouTube.

“What’s especially interesting is the way that Alan played with, and playfully debunked, the idea of the definitive, encyclopaedic work of reference by enlisting the not-always-expert opinions of family and friends for the subject entries,” says Bode. “At the time, the piece appeared to be a drily humorous comment on the incompleteness and fallibility of knowledge, but post-Wikipedia, which came into existence two years after, it takes on an intriguing and strangely prescient new aspect.”

But, as Currall himself points out, with reference to our culture of social media and user-generated content, it’s also important to remember that Encyclopaedia is a period piece.

“The supposed checks and balances that existed in published information before the advent of the internet created a smokescreen of validity, carefully calibrated by the economic muscle of each publisher. And although there is still a vestige of this evident in the main portals and search engines that are increasingly steering our internet usage, I think the curtain was lifted long enough for us to see just how fragile any claim to an absolutely authorised version of the truth might be.

“Maybe the fallibility of the contributors to Encyclopaedia is made a little more obvious by the lack of any attempt to polish up and smooth off the production values of the videos, but I think this fallibility attests to the vulnerability of all apparently ‘certain’ knowledge.”

You can view Encyclopaedia online.

More to see from Jerwood/Film and Video Umbrella awards