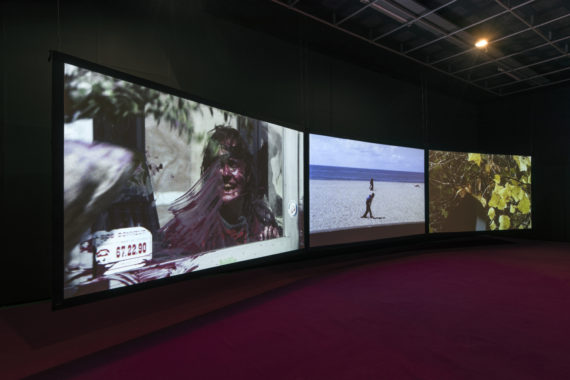 Taking as its theme ‘Beautiful world, where are you?’ – a quotation from the German romantic poet Friedrich Schiller – the tenth Liverpool Biennial addresses global flux, loss and uncertainty.

The Biennial’s launch coincided with constant news reports relating the latest on Trump’s UK visit and the protracted Brexit process, making that theme feel especially relevant. But the power of that theme also influences the way you experience the art.

Take, for instance, Kevin Beasley’s opening performance at Tate Liverpool, part of his installation Your face is/is not enough, featuring a fantastically attired ensemble singing dissonantly and breathing protractedly through amplified respirators. You found yourself thinking it could be a vision, perhaps, of the way freedom and identity are stifled during times like these, when a ‘beautiful world’ also seems to have receded, amid environmental and political havoc. At the same time there could be an up-side to the piece, seen in the extent to which even a decorated gasmask celebrates undimmed potential for expression. 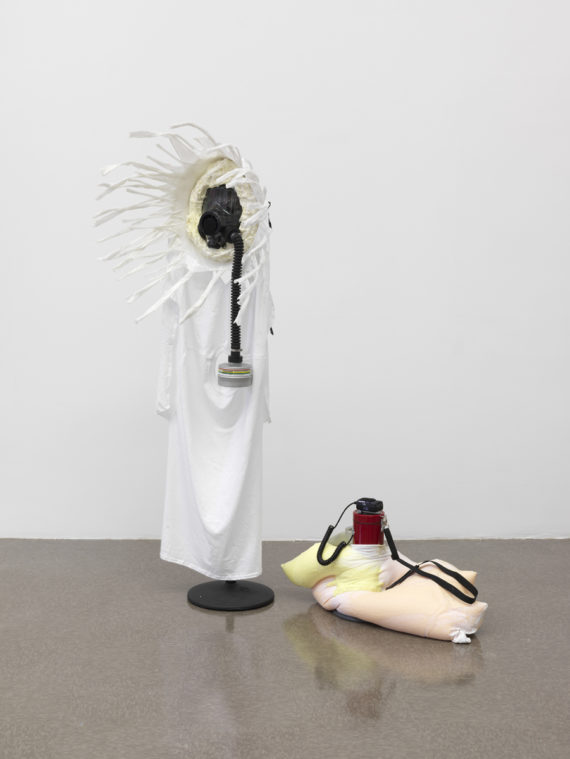 Not far away, the Australian artist, Dale Harding, of Bidjara, Ghungalu and Garingbal tribal descent, has made a new and joyful wall-based work, Ngaya bonda yinda nayi yoolgoo/ I carry you in my heart, directly using the power of creativity found in the relationship to land and tradition, despite change.

Elsewhere, international films and photographs address the Biennial’s theme more literally. At Open Eye Gallery, George Osodi presents a series of giant, dazzling photographs, Nigerian Monarchs, shedding light on that country’s contemporary kings, now relatively powerless but still retaining their finery, but also their mystery. Upstairs, the fate of public libraries, some of them very small and personal, in Karachi, are looked at with great delicacy in Madiha Aijaz’s film, These Silences are All the Words. 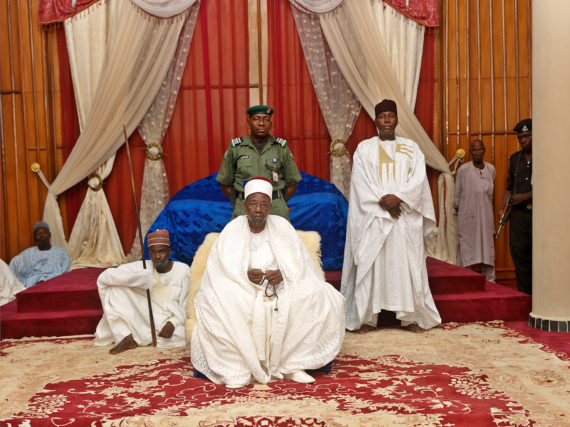 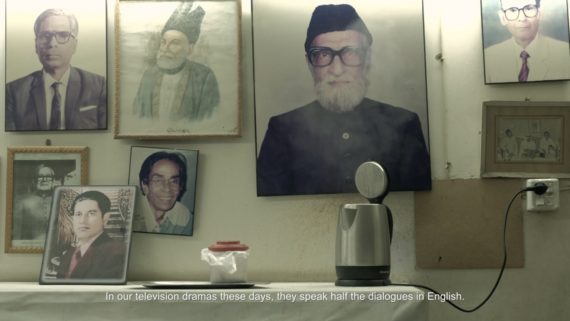 At St George’s Hall, spaces that include a Victorian courtroom and a group of former prison cells contain some fascinating documentary films. Naeem Mohaiemen’s Two Meetings and a Funeral, examines the story of the Non-Aligned Movement and the Organisation of Islamic Co-operation during the 1960s. During one telling scene, at a conference centre in Algeria, where white tablecloths are being laid, each one pristine, all identical, we hear one interviewee saying, “There isn’t a political will to address this domination. Things have dissolved into a nonsense.”

Lanina Joreige’s After the River concerns the confluence that flows through Beirut. The river, in fact, is drying up, and its story is reflected in the changing fate of its surroundings, featuring areas that, after years of civil war, are now undergoing gentrification, the building work this involves being done by refugee labour from the adjacent devastated country, Syria. Now, empty apartment blocks stand waiting for investment, where one speaker once played football with his schoolmates. 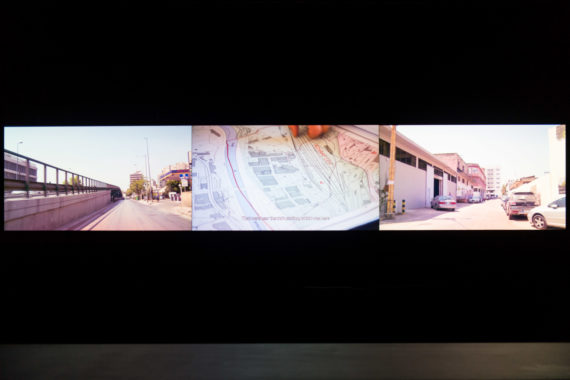 Nearby, Inci Eviner’s unusual piece, Reenactment of Heaven seems at first like a static landscape, moving from day to night and back, but it contains troubling and funny details in the form of small, choreographed films of women repeating actions obsessively. One, in a white crinoline-like dress, seems to have got stuck in a giant flower, while another struggles against a giant pair of trousers, and yet another tries to inhabit a huge paper bag with holes cut in it for eyes. 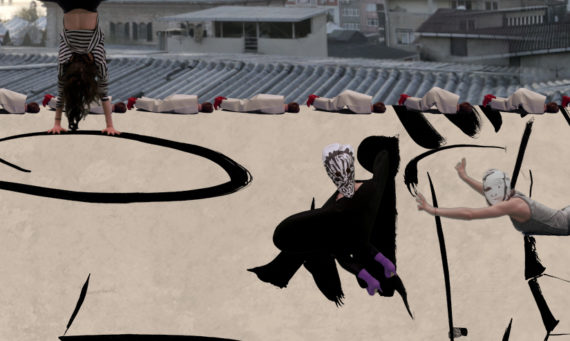 The impact of globalisation on locality continues to be explored at the Playhouse Theatre, where Reetu Sattar’s film, Harano Sur (Lost Tune) celebrates the disappearing use of the harmonium, a hand-pumped keyboard that is played sitting down. At 2017’s Dhaka Music Summit in Bangladesh, a group of musicians assembled to play one, long continuous drone, using a mass of harmoniums and reed trumpets. You watch the film of that performance, lying back on cushions in a darkened room, and time seems to stand still. 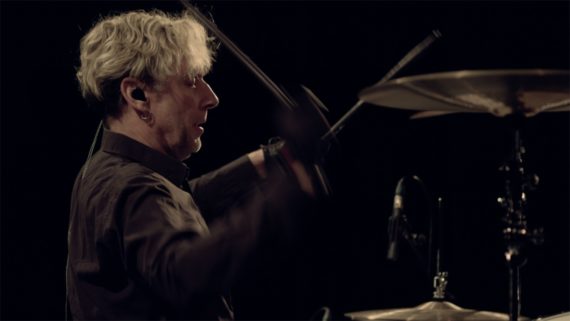 In the auditorium, meanwhile, Ari Benjamin Meyers’ Four Liverpool Musicians (Bette,  Budgie,  Ken,  Louisa) studies Bette Bright, formerly of Deaf School, Budgie, of Siouxsie and the Banshees, Ken Owen of Carcass, and Louisa Roach of She Drew the Gun as they work on a series of musical compositions. You see them wait for their cue, and witness the way the music flows through them, marked in the expressions on their faces, and their bodily gestures. Then, basically, they let rip. It’s an oddly energising experience.

While Meyers’ work captures energy released explosively in a city’s culture, the Korean artist Suki Seokyeong Kang reveals energy slowed down, in a far more constrained and disciplined national form, at the Bluecoat. Her installation, Land Sand Strand uses the traditional hwanmunseok, a woven mat that represents the minimum space available to each individual, as a space that can be ‘activated’ by performers: minimal, modest physical movements by three black-clad individuals, moving limbs and bodies inside and outside the mats beneath their carefully-placed feet. 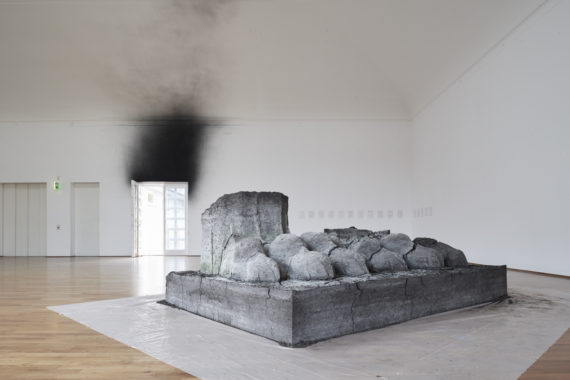 In the next gallery, by complete contrast, Abas Akhavan’s Variations on a Ghost radiates brutality in varying forms. It’s a ‘dirt-rammed’ sculpture, using soil, mesh and water, to reconstruct the clawed foot of an ancient Assyrian protective diety, a human-lion hybrid, examples of which were destroyed by ISIS, in Mosul and other locations. Entering the space, the scale of the lost sculpture seems vast. You see it, and you smell the dirt, too. It summarises the loss of history and the despair of war, and literally makes you hold your breath.

When Agnès Varda, the veteran French film maker, met Hans-ulrich Obrist at FACT on Friday night, she spoke for some time on the subject of potatoes. She was referring to ‘hardship potatoes’, gathered by the poor, featured in her film The Gleaners and I, causing the director at Venice Biennale’s ‘Utopia Station’ to dress up as a potato to publicise the film. No potatoes feature in her new triptych, installed also at FACT, although the centre screen does feature gleaners, gathering washed-up objects along a rocky beach.

On the right, we see one of the director’s film cans suspended, pendulum-like over dead leaves and grass. Most worryingly, screen left shows a sequence in which a woman appears to be being pursued and attacked by a group of long-bearded, animal-like men, bearing purple ink-soaked rags with which they smear everything that gets in their way, such as the windows of the phone box within which the woman takes refuge. 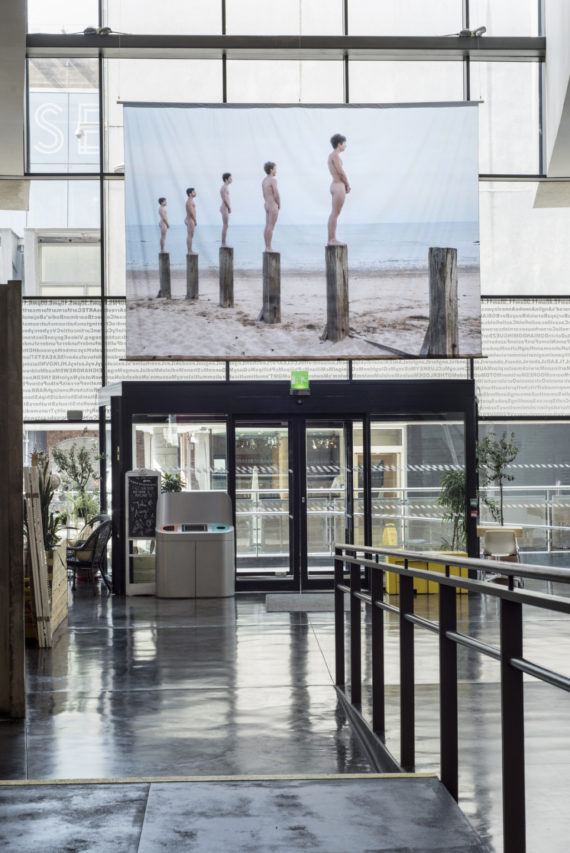 Can the viewer be sure about the precise aim of this piece, even in terms of its juxtapositions? It seemed confusing, to me, but in a nearby gallery, Varda’s 1983 film Ulysse, about her historic 1950s photograph of the same name, was captivating and moving. The photo features a beach on which two naked males, one adult, one a child (named Ulysses, in real life), coincide with a dead goat that had fallen from a cliff. At the time of the documentary being made, Ulysses, by then grown up, couldn’t remember the photograph being taken – despite the fact that shortly after the photo, Varda had him paint a picture recalling it. “I like to mix art and life”, Varda said, to Obrist, “I don’t believe in separated worlds”.

The photo and the documentary exemplify perfectly her approach and the way her work has evolved. And Varda’s philosophy sums up the best things about the Biennial as a whole. 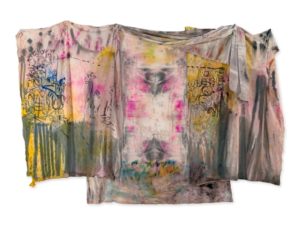 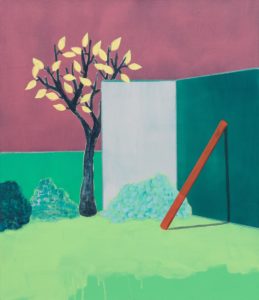 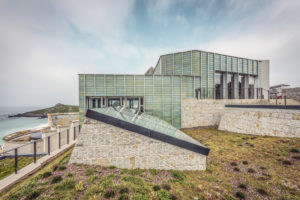