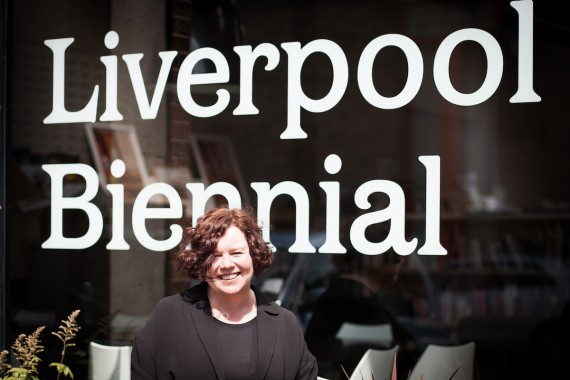 It’s not often that you’ll hear of a festival director visiting every local artist, studio, venue and collective in order to get to know a place better. Yet that’s exactly what Sally Tallant did when, back in December 2011, she moved up north from the London’s Serpentine Gallery to take the helm at Liverpool Biennial.

Arriving at a critical time – the 2012 Biennial was only months away – the new artistic director was determined to gain a full and honest reflection of how the festival was viewed. And, she says, she learnt a lot.

“Not only had I just moved to Liverpool, I had to meet a lot of people and make new networks fast, because six months later we had to open the Biennial. The thing that is absolutely true of any city project like this is that it’s completely, 100% reliant on partnerships and the goodwill of many individuals and institutions. Those relationships have to be strong as it can be quite challenging.

“I spent a really long time trying to understand how the Biennial was understood in the city and everywhere else… Of course, because I was new, people were quite open with me!”

The consensus, learnt Tallant, was that there seemed to be confusion around what the festival actually was and who it was for. “There were some groups of people, artists in particular, who felt a disconnect with the festival – although they enjoyed it as visitors, they didn’t feel a real connection in terms of their practice, which is something I really wanted to address.”

Liverpool was compared negatively with other biennials such as Manchester International Festival and Glasgow International, and the curatorial themes of previous biennials were questioned. It was also felt that the programmes were too fractured and lacked coherency.

“As the theme [for 2012] was ‘Hospitality’, I decided that we needed everyone involved. That meant 52 sites – it was too much. I listened afterwards to feedback and people couldn’t discern between different bits of the programme; which bits had been curated by whom, associate programme or fringe activity.”

Crucially, there didn’t seem to be any long-term connection in the fallow years between biennials with either new or returning audiences, or festival volunteers that were core to the organisation’s operations.

“In terms of challenges,” Tallant reflects, “the Biennial has historically always worked with great artists, but I think there were problems about how that work was communicated and connected to the wider context nationally.”

Renamed ‘the UK Biennial of Contemporary Art’ for 2014, the team concentrated on three key areas: building a real connection between the festival and the city’s inhabitants (including regular artist talks and family events outside the Biennial period and volunteer training through The City is a School); connecting with peers outside the city (including national, collaborative commissioning projects with South London Gallery, Frieze, the ICA and 1418NOW); and trying to improve communications generally. While in 2012 she was to a large extent inheriting a biennial, it’s clear that Liverpool Biennial 2014 will be Tallant’s festival.

So what can we expect from this year’s event? The programme is certainly more focused, despite the extended running dates (July-October) and the absence of a theme (“I’m not sure that’s the best way of curating a festival,” says Tallant. “Why would I tell The Royal Standard what their theme should be?”). The core exhibition, curated by Mai Abu ElDahab and Anthony Huberman and titled A Needle Walks Into A Haystack, consists of a main show at the previously empty Old Blind School on Hardman Street – 16 artists, including Nicola L.’s ‘Functional Art’ objects made over a 50-year period – plus work in five other locations.

One of the most radical architects of his generation, Claude Parent, is showcased at Tate Liverpool, transforming the Wolfson Gallery into a ‘machine for viewing’; slanted floors and ramps filled with Tate collection artworks that challenge the status quo.

At FACT there’s film, photographs and sculpture by LA artist Sharon Lockhart, inspired by a young Polish girl named Milena, while the student homes at St Andrews Gardens get an intervention by experimental Belgian film director Jef Cornelis, and the Liverpool Medical Institution’s Victorian lecture theatre will host an evolving series of talks.

And in the city’s oldest art space and community hub, the Bluecoat, there’s James McNeill Whistler as you’ve never seen him before: an examination of the artist’s ‘attitude, motivations and commitment’.

The festival officially launches on Saturday at Liverpool Cathedral with Michael Nyman’s Symphony No.11 Hillsborough Memorial. Touching on an incredibly emotive subject in the city, and having never been performed before despite being written in 1996, the performance coincides with both the composer’s 70th birthday and the 25th anniversary of the disaster. “We’ve worked really closely with the city to make sure the timing of this is appropriate… It felt like the right thing to do.”

Overall, it’s a punchy, thought-provoking programme, with a format that, explains Tallant, will change with every Biennial. “There’d be no point in repeating exactly the same format,” she says. “That’s not what biennials do. This year I’ve tried this; next time I’ll try something else.”

What, then, does she think a biennial’s role is? “They’re seen as a place where art can be commissioned… something that galleries are finding increasingly difficult to do in this economic climate. For us, I always have to think, why would someone come to Liverpool Biennial? It has to be art that can’t be seen anywhere else, and it has to take advantage of what that situation offers – the architecture, the distinctive politics of the place, or the time offered.”

And how would she characterise this year’s Liverpool Biennial? “I know it will be ambitious,” she says. “By setting up a tempo over the 16 weeks, I hope that people will want to visit and revisit the Biennial … I want to make it part of people’s everyday lives. Liverpool is a place where art happens and where art is made and where ideas are tested.

“We’re doing something important and pioneering in terms of the field. I want everyone to come and move here!”