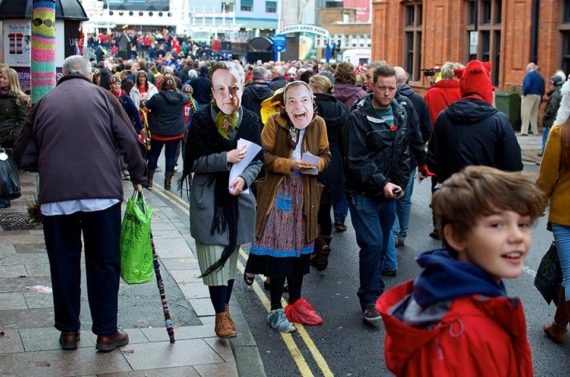 Three years ago my bed frame folded under the pressure of my weight. Somehow I ended up questioning my artistic practice.

The landlord ordered a new bed. When it arrived I realised, to my horror, it sat on the floor, not perched three inches above it like the old one. This dead space is where most of my practice lived: a myriad of laundry bags, two foldable chairs, and 20 David Cameron and Nigel Farage masks, among other things. A random collection of stuff to anyone else, to me it was a living archive of There There, the company I co-founded with Dana Olărescu – our performances and installations, past and present.

As I unsuccessfully tried to rehouse one half of my practice (the other was living with Dana), I remembered all this stuff belonged in a studio, except of course we couldn’t afford one. For all the funding, commissions, invitations, the consistency of our practice – a studio was a complete pipe dream. I spent the next hour trying to determine the exact point at which an artist becomes a hoarder. What if nothing has changed five years from now? How about ten?

I’m not about to tell you artists can barely afford rent, let alone a studio, or that the funding cuts have trickled down to the point where no one is shocked to be offered a profit-share deal by an NPO. I’m not going to say degrees cost a lot these days; or that between this and the long term financial insecurity, economic privilege will become a prerequisite of an artistic practice.

This is a conversation that is already happening – though we all wish it was louder and more politically present. Here’s a recent article, here’s some research on the topic, and here’s a blog from Bryony Kimmings (four years old but painfully relevant). Instead, I want to consider something else: whether this economic pressure shapes the kind of work that gets made, especially by emerging artists.

The question is not what happens if there’s still no studio in five years – it’s what happens if my work still fits under the bed five years from now. The miniscule scale of an emerging performance practice (mine, as it was three years ago, is by no means an exception) is never a choice artists make, it’s a necessity. Pieces don’t get devised in a single space, over a sustained period; instead, most work gets made in chunks of stolen time – a week-long residency here, a weekend there.

Schlepping your work around the city is a given; if the piece is not light it will not get made. The time a piece needs to develop is also important. When you’re starting out, devising is almost always geared towards a performance date – a festival, a one-off showing, or a scratch night, imagined as a platform for further development. If these don’t bring immediate results, it’s time to pack your performance under the bed until the next time you score a gig – together with any ideas on how you might improve it.

If that next gig is outside the artist’s home base, the piece better fit into a suitcase. Anything that’s too heavy or too big to board a train doubles transport costs, likely making the journey unviable. If you’re an emerging artist, not making small-scale work is an act of ultimate masochism.

There’s more. The low budget inevitably brushes off on the aesthetic – trashy, kitsch or dirty is cheaper to produce than cleancut or lavish. Professional standards are lowered in recognition of the unprofessional conditions – we forgive sloppiness of thought and concept, imagine a custom-made object where a prefab is, and learn to not question the unfinished, raw nature of a lot of work. Meagre resources inevitably mean artists reuse those at their disposal, rather than experimenting with new ones – this is especially true of technology. 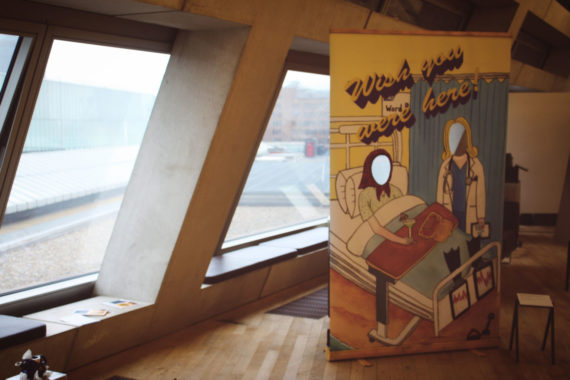 Artists who need more than a smartphone camera, those whose ideas fit a bigger scale, or ask for collaborators, can do so only if they self-finance. Companies are damned to extinction: scheduling rehearsals in between two or more day jobs is an extreme sport, and fees almost never increase with the number of people involved. This means some ‘genres’ proliferate – autobiographical work is less likely to come from a company than a solo artist.

Habits gained early on don’t necessarily disappear, because the financial pressures ease but never relinquish. We make small work because we can’t make big work; we come up with projects that we think will get funded. Meanwhile, future generations of artists are watching – and perhaps thinking that all the formal, topical and conceptual patterns are what the artform is, not a consequence of a faulty production model. And so the circle continues.

All these issues come back to a chronic lack of money; as a result they often seem unsolvable. Some improvements may not require cash donations – they can be achieved if the top (arts councils and NPOs for example) becomes more sensitive to the bottom (early career artists). Artist development, often high on the agenda of funders, should never be the exercise in box-ticking it’s often perceived to be. Work-in-progress nights are only worth it if the venue’s producers show up, and serious feedback is provided.

Residencies are great, but often require artists to give up their annual leave, or worse, pay – we should instead build support programmes that recognise most emerging artists have day jobs. Residencies also often require immediate results – commodifying artist development, rather than nurturing new voices. Risk-taking should be actively encouraged – artists are more likely to leave their creative comfort zone if cultural organisations encourage them to.

Last but certainly not least, NPOs should always pay union minimums – if they don’t, why would anyone else? It all comes down to refocusing away from sheer quantity – of performances, residencies, artists provisionally supported. It’s only arts councils who can make this standard (and not incidental) practice.

My experience is performance-bound; other art forms, I’m sure, have their own set of parallel and divergent issues. Equally important, there are many individuals and organisations supporting artists, newbies or not, in substantial, tailored, sensitive, and responsible ways, almost inevitably with limited means – and I have benefited enormously from many of them; artist-led initiatives often lead the way in shifting the paradigms we inhabit.

As for There There, we made our way from emerging to emerged since that day my bed broke. We recently made a version of our installation Trigger Warning for the Tate Exchange programme at Tate Modern. Half of it is currently in my living room, but it most certainly does not fit on a train.

Images:
1. There There performing Text HOME at Experimentica in Cardiff (2014), having unpacked a single carry-on bag. Photo: Adam Chard
2. Trigger Warning at Tate Exchange, Tate Modern; the Health Tourism photo banner (6kg) is one of the five games audiences can play. The installation does not fit on a train. Photo: Maria Tanjala

Bojana Jankovic is ½ of There There, a 50% Romanian, 50% Serbian performance company. Our work explores issues of immigration, national identity, exclusion and heritage through participatory performances and installations. Audience development, focused on engagement with immigrant communities, is a core part of our creative practice. Since 2010, There There has made pieces for the Museum of London and Tate Modern / Tate Exchange, received funding and support from Arts Council England, cultural and diaspora organisations (Counterpoints Arts, Romanian Cultural Centre), and shown work in performance, participatory and visual arts settings around the UK, including at SPILL, Experimentica and Rich Mix.