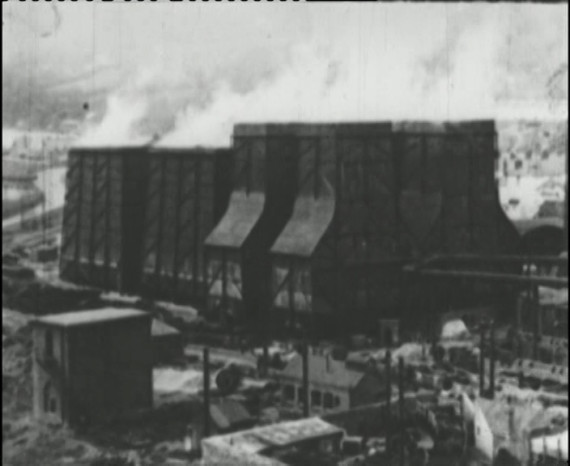 As history repeats itself, with the threat of closure hanging over the steelworks at Port Talbot in Wales, a one-day festival exploring the loss of a similar community 14 years ago is taking place in the 200-acre former steelworks site of Ebbw Vale in South Wales.

Artist Stefhan Caddick has worked with the Ebbw Vale Works Archival Trust to curate EBBWFERRIC, a festival that explores the past and future of the now demolished plant, whilst celebrating metal in its many cultural forms.

Heavy metal riffs will resound from the post-industrial site as Commercial Zone, Tits Up and Godbomber take to the stage in the grade II-listed steelworks building and 30ft high roller mill.

An entirely different metal happening will see artist Andy Griffiths creating a series of controlled explosions in a molten metal throwing performance, that will see the hot iron landing on an illustrated chipboard target.

As well as curating the festival, Caddick has been working with the archives and local community to create Specific Gravity, a film installation that explores the history of the steelworks, juxtaposing 100-year-old footage from the site with NASA’s mapping data of the lunar surface.

Exhibited in the General Office, now home to the work’s archive, on the day of the festival the archives will be open to the public to explore with former employees of the steelworks on hand to share their memories of the site.

“I’d rather this event wasn’t given such stark relevance by the prospect of more steelworkers and their families facing an uncertain future, but the unbearable prospect faced by the Port Talbot community actually happened here in Ebbw Vale,” said Caddick.

“I’ve worked closely with the volunteers in the archive to bring this mini festival together in a way that sensitively allows for the discovery of the steelworks’ compelling history, without ignoring the continued uncertainties, and simply allow people to enjoy the pure distraction of metal-based entertainment.”

EBBWFERRIC is free to attend and takes place on Saturday 9 April 2016 from 4pm at the General Offices, Steelworks Road, Ebbw Vale, NP23 6DN