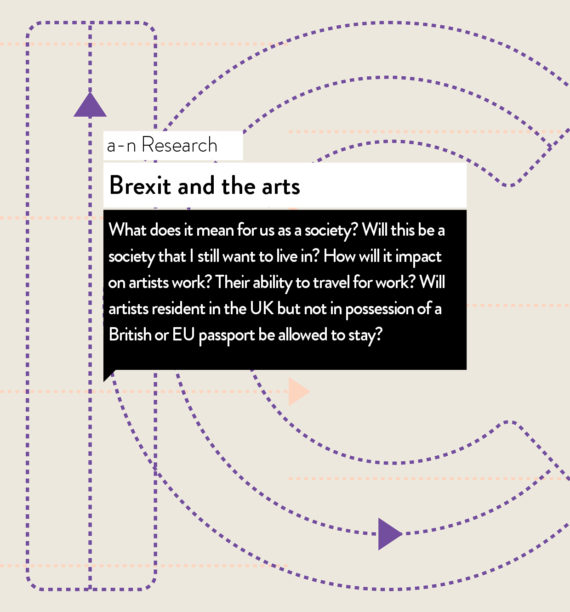 a-n has been closely tracking the likely effects of Brexit on the creative sector since the referendum in June 2016. In the wake of the decision to leave the EU there was a series of Post-EU referendum news stories, followed by post-referendum surveys gathering members’ views. More recently, a-n has published research looking at the expected impact of Brexit from the perspective of the creative industries.

Early comments from both artists and those working for arts organisations tried to make sense of the referendum, airing what seemed to be the key questions for artists: What does Brexit mean for us as a society? How will it impact on artists’ work? What about artists’ ability to travel for work? Will artists resident in the UK but not in possession of a British or EU passport be allowed to stay?

Key findings from a-n’s first Post-EU Referendum survey of its members was published in July 2016, with 1,300 members responding over a two-week period. Concerns were grouped into two broad areas: social and cultural concerns, and worry over the impact on practice and finances.

Generally, the response from members was overwhelmingly one of dismay. It found an immediate impact in terms of price rises for importing materials as the value of the pound fluctuated, while one curator reported that it was setting back all projects by 18 months.

The survey found that 54% of respondents had travelled to the Europe up to six times in the previous 12 months, and almost 50% were worried about potential restrictions on travel, visa requirements and new import and export bureaucracy.

The underlying message was one of uncertainty, with plenty of fears but very little hard evidence of what Brexit would ultimately mean.

Are we now any the wiser about the impact of Brexit? Responses have moved on as the cultural sector gets used to the idea and understands that the probability of a reversal is low. Organisations are now attempting to be more positive.

The British Council has published some pieces that could be said to ‘give a positive spin’. It reiterates the premier position the UK holds as a world centre of the creative industries, but acknowledges that it will ‘have to work hard’ to maintain its position post-Brexit.

The Creative Industries Federation, which formally launched as a membership body in January 2015, has been on the case since the beginning, identifying specific issues that will hamper the creative industries sector if they are not addressed during negotiations.

In 2017, it produced a series of ‘Brexit red lines’ with associated recommendations, before publishing its Global Talent Report in October that year. This report argues that the health and vitality of the creative sector relies on international freedom of movement for creative workers and artistic product, as well as the international exchange of ideas.

Released during early Brexit negotiations, the report attempts to quantify the numbers of EU nationals working within the creative industries in Britain. It argues that there is a skills-gap in the UK, and that in order for the sector to remain ‘world leaders’ it needs to be able to recruit international workers quickly and easily.

Impact of Brexit on the Arts and Culture Sector was recently published by Arts Council England. A comprehensive report covering six major areas where Brexit will have an impact, it highlights the potential effect on international working. It states that 93% of stakeholders ‘are concerned about economic uncertainty and its potential impact on the funding environment for arts and culture’.

But in common with all the existing reports, it can only flag up areas of concern on a speculative basis, since so little of the eventual outcome is known.

Useful to read in association with this is another ACE-commissioned report quantifying how much the EU has contributed to the UK arts, museums and creative industries. It states that 1,385 projects received a minimum of £345m in EU funding in the period from 2007-2016, with a total per year of approximately £40m. This can be thought of as a guideline of the specific amount the UK arts sector can expect to lose as a result of Brexit.

In July 2017, a-n conducted a second post-referendum survey and published the results in the paper One Year On. Around 1,200 members responded, and this time it was clear that the referendum result was having a significant impact for artists.

19% of respondents reported an increase in costs related to their practice; 13% had experienced a negative impact on sales; 10% had seen a reduction in funding; and 8% reported a reduction in opportunities overall.

These are significant numbers, showing a consistent detrimental impact on artists’ ability to earn a living following the vote for Brexit. Given the persistent underlying difficulties of earning a living as an artist – see the research paper Artists Work in 2016 – these figures are cause for concern.

Responding to these concerns, last year a-n released its own mission document to guide its work on behalf of visual artists over the following five years, Valuing Artists. It has four key goals, one of which is to campaign for a Brexit that works for visual artists.

The difficulty for everyone at this point is that despite Article 50 being triggered, and negotiations at least theoretically being underway, the UK Government still doesn’t have an agreed vision of what Brexit should look like.

Nearly two years on, the outlook is still confused, and artists are still feeling uncertain. A clearer picture will emerge over the next couple of years, surely. In the meantime, a-n will continue to report on its own work in this area, and to compile the latest research relevant to artists.

More on a-n Research: access over 250 research documents and publications at www.a-n.co.uk/research