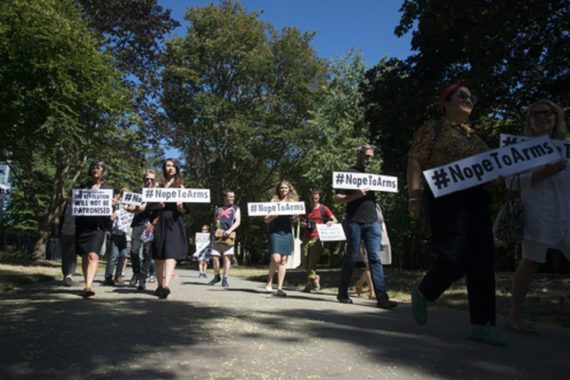 40 artists who pulled their work from the exhibition ‘Hope to Nope: Graphics and Politics 2008-2018’ at the Design Museum due to the institution’s relationship with arms dealer Leonardo, have staged an alternative show of the pieces at the Brixton Recreation Centre.

‘From Nope to Hope: Art vs Arms, Oil, and Injustice‘ is on display as part of the London Design festival and features work by artists including Milton Glaser, Dread Scott, the Guerrilla Girls, BP or not BP?, and Shepard Fairey. In addition to the re-hung pieces it also includes a host of extra materials, and work by other artists who have offered their support to the collective’s actions.

In a statement posted on its website, Nope To Arms said: “The show is intended to be an inspiration for all – and a rallying cry to anyone who’s ever wanted to stand up to injustice, speak truth to power and make their world a kinder, safer, more beautiful place.”

The original controversy arose after the Design Museum hosted a private event organised by the Italian ‘aerospace, defence and security’ company Leonardo on 17 July, which coincided with the Farnborough Air Show.

At the same time the museum was hosting a ‘Hope to Nope’ discussion about the role of social media and design in contemporary social justice politics.

When news of the Leonardo event came out, a number of artists in the show accused the museum of undermining their artistic ethos by receiving unethical funding – a particularly contentious issue considering many of them focus their practices around sociopolitical ideologies.

In protest, a group of exhibiting artists formed the Nope To Arms collective. A statement signed by 37 individuals or groups with works in the exhibition, in the museum’s permanent collection, or for sale in the museum’s shop, requested that the museum replace each of the artworks with a label explaining why it had been removed.

The Design Museum did install labels in place of the works which also included a statement from the museum’s directors setting out its position. This stated: “This artwork was removed at the request of the lender who has objected to a private event by an aerospace and defence company that was held at the Design Museum.

“The Design Museum is proud of the Hope to Nope: Graphics and Politics 2008-18 exhibition. We believe that it is important to give political graphics a platform at the museum.

“The museum has clearly shown that it believes in giving the views expressed in the exhibition a hearing, without suggesting that it is taking a position on them itself. The museum’s policies are in line with those of our peers in the cultural sector. And we are disappointed that this protest has impacted the visitor experience of this important exhibition.”

As part of the ‘From Nope to Hope’ show, a discussion event on the ethics of cultural funding istaking place on Saturday 22 September.

Titled ‘Dirty Cash: Can Artists Clean Up Arts Funding’, it will feature a number of participants, including: Judith Knight, co-director of ArtsAdmin; Leah Borromeo, journalist and member of The Space Hijackers; Zita Holbourne, trade unionist, activist, author and artist; plus Charlie Waterhouse, artist, This Ain’t Rock’n’Roll.

The event, which runs from 2-4pm and is free to attend, will be chaired by Jess Worth, co-director of Culture Unstained and a member of BP or not BP?

‘From Nope to Hope: Art vs Arms, Oil, and Injustice‘ is on display at the Brixton Recreation Centre until 23 September.