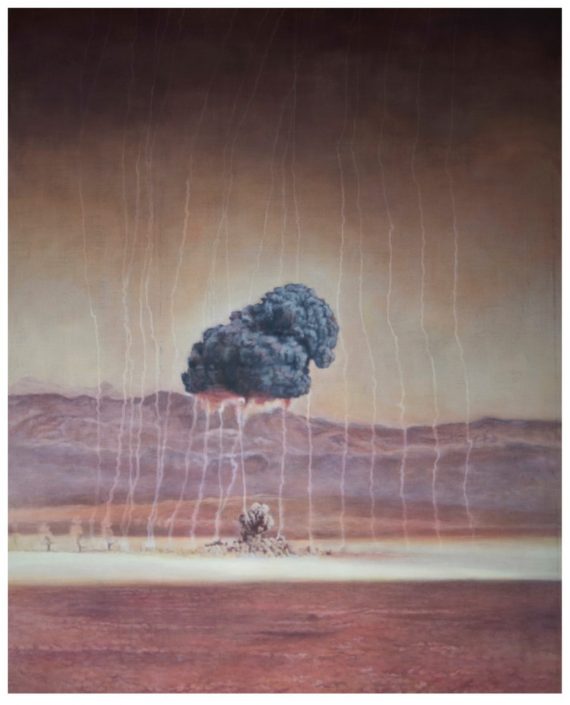 Kirsty Harris, Vane Gallery, Newcastle
London-based artist Kirsty Harris’s latest solo show includes paintings featuring vast landscapes violently interrupted by nuclear bomb tests. These are presented alongside various looped projections of scenes from Chinese People’s Liberation Army films. Other works on show include The Apple, an instructional artwork, illuminated by a bare bulb from above, which commands viewers to ‘eat the apple and take a printout from the stack’. Also available to buy as part of the exhibition is How I Learned to Stop Worrying (1945-2019) – a 12-inch vinyl picture disc featuring a musical account of every officially recorded nuclear explosion dating back to 1945.
Until 28 September 2019. www.vane.org.uk 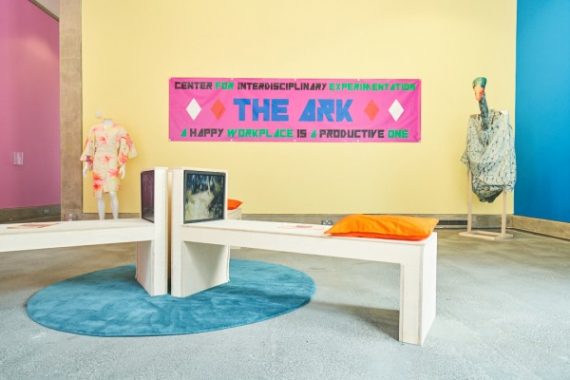 Grace Ndiritu: The Ark, Bluecoat, Liverpool
British-Kenyan artist Grace Ndiritu’s exhibition at Bluecoat draws on her 2017 research and live art project, ‘The Ark: Center For Interdisciplinary Experimentation’, which took place at Les Laboratoires Aubervilliers, Paris. During the nine-day event, participants explored radical new ways of thinking about art, science, spirituality and politics, in order to suggest possible solutions to the problems of the 21st century. This show includes archival materials generated from The Ark, such as a publication, protest placards and animal costumes produced for a street parade. Also on display is the artist’s wider research into spiritual communities, farming, permaculture and ecology.
Until 13 October 2019. www.thebluecoat.org.uk

Kathleen Ryan, New Art Gallery Walsall, Walsall
As part of New Art Gallery Walsall’s year-long celebration of sculpture it is presenting the first UK public institution exhibition of the work of American sculptor Kathleen Ryan. Made from a variety of materials, ranging from cast iron and precious stones to found objects including bowling balls, her installations reference classical sculptural traditions and archaeology. The results offer an intriguing juxtaposition between natural forms and industrial manufacturing.
Until 22 September 2019. www.thenewartgallerywalsall.org.uk 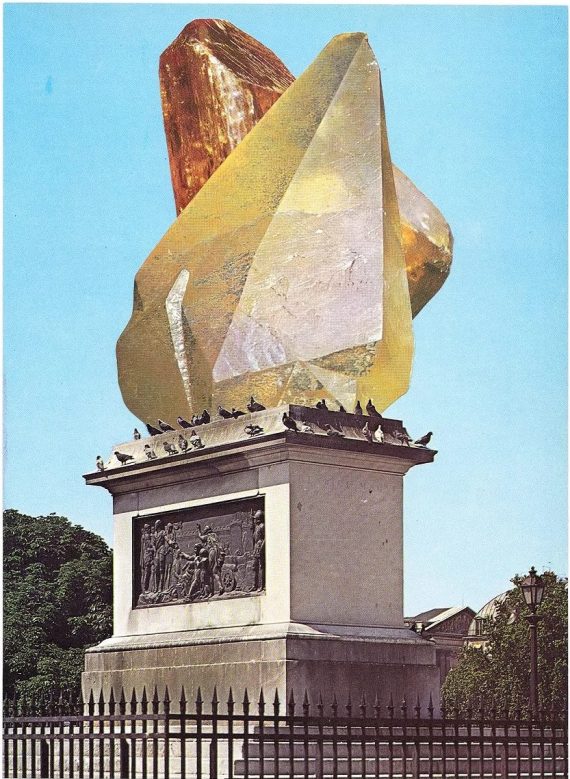 Karl Russell Vickers, Assembly House, Leeds
This series of 48 images on paper uses collage to reimagine crystals, minerals and gemstones as public sculpture. Vickers presents the various elemental materials in their natural state, but placed into a landscape, atop a landmark spire or on a billboard. The images are then arranged within a framework grid of ‘shelves’ which are made from red and white stripes, which mimic photographic scales used to indicate sizes and distances in images. These are displayed alongside additional and leftover materials.
Until 29 September 2019. www.assemblyhouse.art

Vito Acconci: FAULT-LINE-ON-5, Pace Gallery, London
American performance, video and installation artist Vito Acconci is best known for his controversial body art of the late 1960s and 1970s. This show explores that period and specifically features video, sound and objects from his 1971 performance CLAIM. On display are hundreds of historic documents that explore the relationship between ‘subject and object, public space and body politics, system of movements and language’.
Until 14 September 2019. www.pacegallery.com