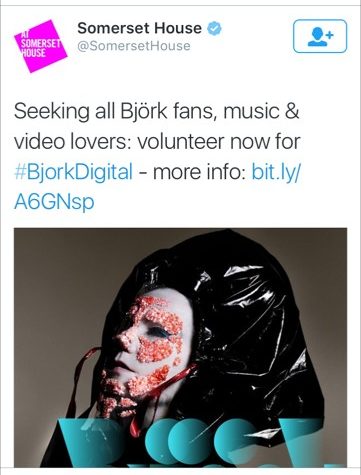 Opening to the public today and continuing until 23 October, the immersive virtual reality exhibition from the Icelandic artist features digital and video works resulting from her collaborations with visual artists and programmers.

The post links to a more detailed explanation on the organisation’s website, which explains volunteers will contribute to ‘a range of projects’. These include ‘educational workshops for all ages, the information desk, family events, public events, giving public talks, escorting groups around the site, administrative support, planning and preparation’.

The open letter, which has been emailed to Somerset House director Jonathan Reekie and other members of staff, states that while “we are not against volunteering per se and agree that many people can decide to volunteer at a local organisation for all sorts of reasons and at different stages in life, for many young people… unpaid work seems to be the only option to get a foot in the door”.

The letter continues: “We are concerned that by not paying people, only those who can afford to work for free will be able to benefit from these positions. As volunteering is becoming more prevalent, those who are unable to take up these unpaid ‘opportunities’ are less likely to enter the sector.

“…the calling on Bjork’s ‘fans’ to freely bring their skills, time and interest – essentially subsidising the charity/company’s £15 ticketed exhibition by adding value to the visitors’ experience and financial value to the Somerset House brand, as well as to a wealthy established artist/icon – seems particularly insulting when again this could so easily have been an actual opportunity to offer young creatives paid work…

“At a time when youth unemployment is skyrocketing, institutions such as yours should be doing everything they can to provide paid opportunities and training.”

In response to an artnet News story about the call for volunteers, a Somerset House statement said: “Volunteers at Somerset House never act as a substitute for paid employees and the Trust does not recruit volunteers to replace or displace them.”