Organise With Others: a post-referendum 'reactivation day' for artists and the arts - a-n The Artists Information Company 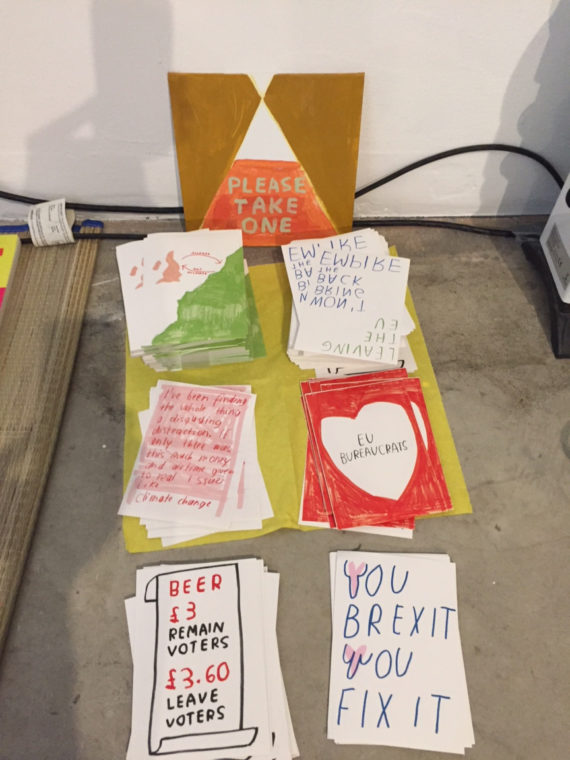 A year after its post-referendum Unite Against Dividers weekend, Keep It Complex recently reconvened for a ‘reactivation day’. Organise With Others was billed as a chance to discuss strategies and actions, building on the initial weekend’s aim ‘to equip and activate the arts community after the UK’s EU Referendum’.

Developed out of an artist-run Remain campaign, Keep it Complex describes itself as a ‘collaborative and evolving organisation’ that ‘confronts political issues through ideas and action’. The event brought together visual artists, producers, designers, musicians, games developers, campaigners and politicians for a day of sharing knowledge and practice around activism, with speakers reflecting on the year’s achievements and making connections for future working.

The contribution from Polish artist and activist Magda Fabianczyk emphasised the need to collectivise, build relationships with others and question existing norms. She suggested that art has the potential to instigate processes where we might start to imagine ourselves differently.

The need to work together was also a concern for artist Rose Gibbs, who expressed frustration with the art world’s lack of perspective on political work, stressing that progressive programmes do not equate to the embodiment of progressive politics. Galleries also have limited impact, often failing to reach people or preaching to the converted. Reflecting on this and the negativity of ‘resisting’ – being against something – Gibbs wanted to engage people positively through creativity. 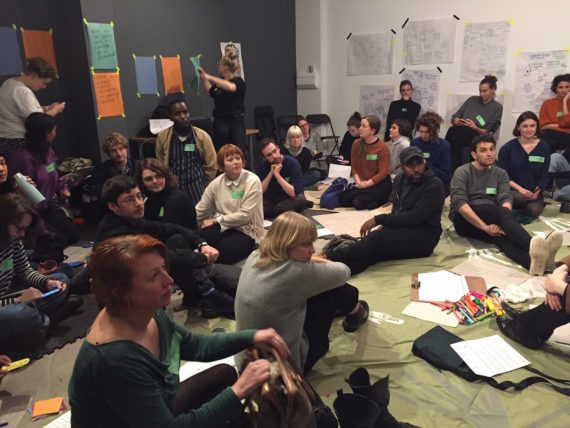 Gibbs described how she began a community garden to build relationships with neighbours; they are now collectively working on a community cookbook, bringing together recipes from different cultures. She argued for cultural democracy – recognising culture as something that people are doing all the time, not just in established spaces and institutions or by professional artists.

In a similar vein, Fozia Ismail alluded to the power of food to bring people together. Through Arawelo Eats, her pop-up supper club, Ismail uses east African food to explore what it means to belong in a post-Brexit world. She observed that in Britain we have widespread acceptance of food from all cultures – just not the people. She shared the incongruous experience of feeling hyper visible and invisible at the same time whenever she chooses to wear a headscarf.

More positively, Counterpoint Arts, the organisation behind Refugee Week and which supports arts by and about migrants and refugees, reported that refugee arts are becoming more mainstream. Organisations like the Southbank Centre have become involved in the initiative and the V&A has run its own week of activities.

Two concerns about these subjects arose: how do we talk about migration and refugees without creating division? And how can we talk about ‘diversity’ without actually using that word, which it was felt was often employed as a way to avoid talking about a difficult subject?

These are important considerations for the visual arts – a sector that in the UK is notoriously white and middle-class and which, despite many fine words to the contrary, continuously fails to make meaningful, actual changes. 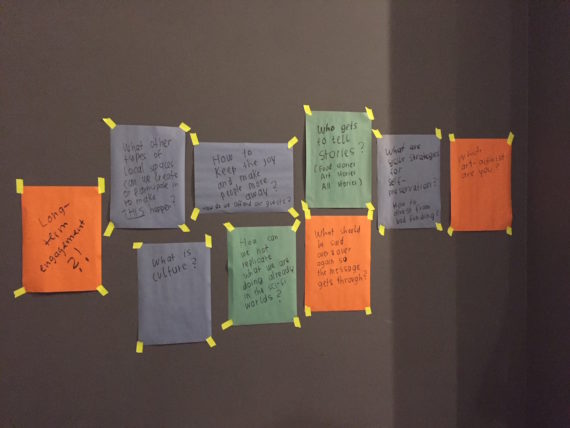 After a break for cake and coffee, we split into groups to discuss specific issues raised during the speakers’ reflections. In ‘How to use your non-political skills in a political context’ we began by highlighting the group’s skills. These included visual communication, writing, public speaking, creative activism, working with communities and sharing knowledge.

Creating content online has provided the opportunity for incredibly creative responses to world events – one by no means limited to artists. Games developer Rosa Carbo-Mascarell, who co-founded Games for the Many, shared her experience of making Corbyn Run, a game featuring the Labour leader and the party’s policies that went viral during the 2017 election.

But how does the work of artists complement or differ from this type of creative work and how can artists work in political ways without producing reductive, didactic artworks? As one artist pointed out, simply communicating ideas is being political. Artists can use their skills and work to convey these, and artists who do work in politically engaged ways could be more explicit about their intentions and motivations – being prepared to put their necks on the line.

To avoid reinventing the wheel, artists can learn from each other and from existing projects and be open and generous with their skills – a theme very much at the heart of Organise with Others. 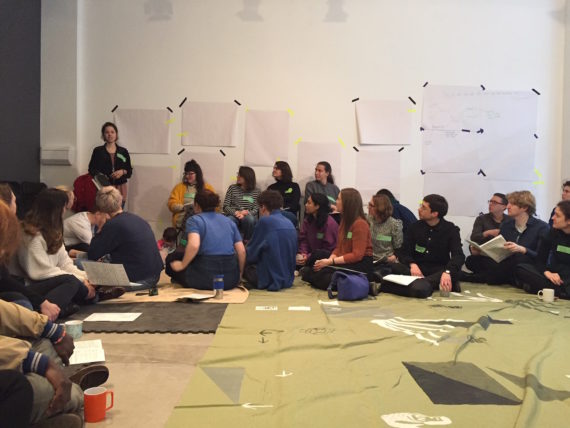 Many of the discussions at Organise With Others were concerned with elements of self-care, so it seems pertinent to end by sharing the strategies for self-preservation highlighted in a session on preventing burnout:

What I like most about Keep It Complex, and one reason why its events are so successful, is that they attempt to embody the politics and practices that they argue for. For example, our name tags stipulated our preferred pronouns and the event’s printed programme even included an itemised budget of all expenditure and income. Imagine if all organisations were prepared to operate with this level of transparency?

It’s rare to go to an event and not leave feeling either disappointed or that you’ve just provided an organisation with free consultation services. Organise With Others felt like a genuinely productive, safe and pro-active space for the mutual benefit of its participants. It was fun and informative, serious yet light-hearted – and it did what it said on the tin.

Organise With Others was held at Enclave, London SE8 on Saturday 13 January 2018