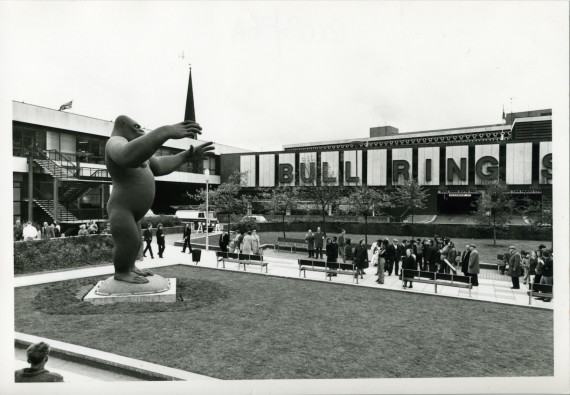 “If the public had to decide what would go on the fourth plinth you’d have Lady Diana, riding on a dove, winning the Battle of Britain.” Grayson Perry’s infamous remark in a 2009 debate on whether the public could be trusted to choose public art may sound like the worst kind of snobbery, but his point remains a valid one.

Historic England‘s current Out There: Our Post-War Public Art exhibition at Somerset House, London – part of the year-long UTOPIA 2016 festival – focuses on the fate of key public art works created between 1945 and 1985, viewing the discussion from the other end of the life of the artworks.

Many have been damaged, lost or destroyed; yet other pieces such as Henry Moore’s Draped Seated Woman (pictured below) remain cherished. The campaign to ‘Save Old Flo’, as Moore’s sculpture is more colloquially known, involved residents of Tower Hamlets successfully campaigning against the sale of the work. As Duncan Wilson, chief executive of Historic England, reminds us on the fate of featured works, “Many remain in public ownership, and all belong to us”. 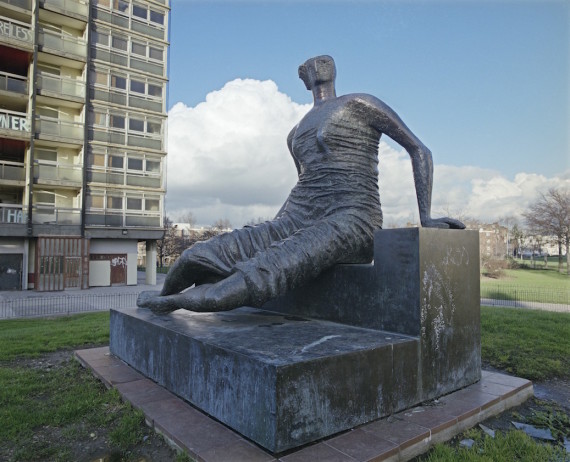 The Out There exhibition publicity describes the work of the period as ‘Brave new art for a Brave New World’, created by ‘the generation that went to war with the Nazis’. While the bellicose nature of such statements skews the debate around the significance of such work, the show still leaves room for the question of whether this kind of art should have a shelf life.

By documenting many of the same attitudes towards public art that still exist – suspicion, intrigue, questions about the cost of the work to the public, but also a genuine desire to share art with the nation – it is refreshing to find that some of the more challenging artworks have indeed remained.

The 1972 City Sculpture Project is a striking example of brave commissioning in the face of public indifference and even hostility. Eight cities were loaned sculptures by emerging artists of the day whose experimental practices were abandoning traditional materials and moving towards abstraction and conceptualism.

Two of these artists, Garth Evans and Liliane Lijn, took part in a recent Out There conversation event that explored the history and legacy of the project. Evans states that this 1970s experiment “intended to put sculptures in places that they were not habitually seen”. For Lijn, the natural progression from conceptualism was for “place making rather than object making”.

This ambition was perhaps always fated to be agitational, but Lijn rejects claims of elitism. “Most artists are completely unpaid. What’s elitist about that?” she says. For her work, a six-metre tall rotating steel cone, White Koan for Plymouth – the title a linguistic pun on its shape and the Zen Buddhist concept of a koan – the entire budget was £1,000 (about £13,000 today).

Nonetheless, the initial difficulty of the public relating to eight avant-garde sculptures means that the majority of the works no longer exist. Many were vandalised, one was kicked over and rolled down a hill. Another was labelled as “revolting” by a local vicar who suggested “blowing it up”. 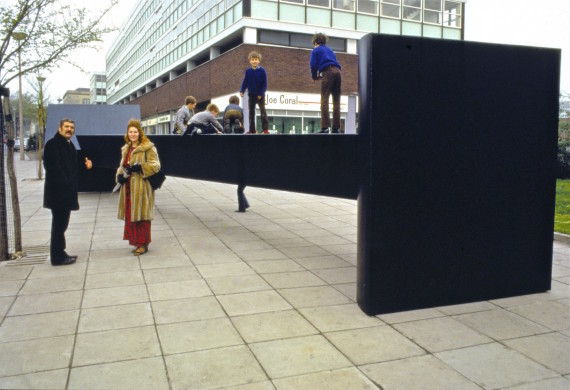 Others now only exist abroad, in storage, or as maquettes. Nicholas Monro’s 18-foot fibreglass King Kong (pictured top) is still with us, albeit on its back in Penrith, its original Birmingham site demolished in the redevelopment of the city’s Bull Ring.

“I didn’t want to tell people what to think,” insists Evans, who at the time generously asked the public what they thought of his black abstract form, Steel Sculpture for Cardiff (pictured above).

“Responses were satisfying in that people were somewhat bewildered by the object, but [it was] very upsetting that the sense of not knowing was not something they were willing to take on.” He adds: “The people who are really positive are the kids, the children, no problem at all: ‘I want 100 like it’.”

Evans laments that not enough time was allowed for the community to come to terms with and embrace the sculpture. “Six months was just not long enough,” he says. “If they were left for a period of years people might have become attached to them.”

This latency in appreciation is also evident in Lijn’s piece for Plymouth, which eventually fared better. After the city chose not to buy the sculpture it gradually made its way back to the artist, before being purchased by University of Warwick’s Mead Gallery in 1974. “It was never maintained,” Lijn explains. “Somebody had lost the ‘door’ to it and somebody had said there was a tramp living inside of it!”

The university’s vice-chancellor had decided to scrap it but the students went on strike in order to keep the sculpture “which they loved”, says Lijn. The work was subsequently restored and in 2005 Lijn was given an honorary doctorate. The sculpture now even has its own Facebook page with posts affectionately calling the artist ‘Mummy’.

Much of the art from the City Sculpture Project demonstrates the vision of artists and the need for curators and local authorities to show bravery in commissioning public art, holding their nerve while tastes are acquired to prevent an artificially short shelf life – rather than play it safe and commission something dreadfully mediocre.

A case in point is the new public commission by Corby Borough Council for my local railway station, following receipt of an £80,000 Section 106 payment. Lead member for Community (formerly Community and Culture), councillor John McGhee, announced: “I am particularly pleased that the people of Corby get to vote for what they would like to see” – before offering three poor quality photographs of vaguely different sculptural arrangements.

Artist John Atkin’s proposed sculpture allegedly pays tribute to the town’s former steel industry that sadly died out in the 1980s, with a dated aesthetic from the same era that has sadly survived.

For some, the story of the UK’s disappearing public sculptures is a cautionary tale that reinforces the idea that public art isn’t forever – that it has a shelf life, and that this is a good thing. I put this notion to John Plowman of Beacon Art Project, which commissions context-specific artworks. “Maybe it should have a shelf life. But,” he says, referring to the City Sculpture Project, “this kind of innovation couldn’t happen now.”

Out There: Our Post-War Public Art continues at Somerset House, London, until 10 April 2016. www.somersethouse.org.uk/visual-arts/out-there

James Steventon is one of five a-n members participating in the inaugural a-n Writer Development Programme. He is an artist, writer and runner based in Northamptonshire. James is also Education Officer for Fermynwoods Contemporary Art, and a lecturer at The Sir John Cass Faculty of Art, Architecture and Design at London Metropolitan University.

For more information on the writer programme, and to read more of the writers’ work, visit the programme’s blog on a-n.co.uk and use the a-n writer development programme tag

A Q&A with… Gerard Byrne, artist filmmaker by Anneka French

James Steventon is an artist, writer and runner based in Northamptonshire.

James is also Education Officer for Fermynwoods Contemporary Art, and a lecturer at The Sir John Cass Faculty of Art, Architecture and Design at London Metropolitan University.