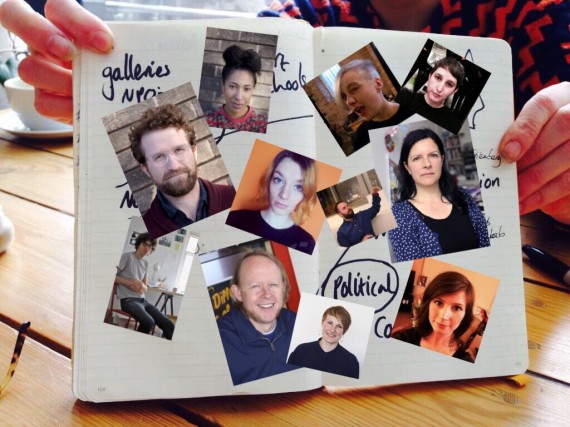 In the run up to the general election in May, a-n and AIR has launched the Paying Artists Regional Advocates – a team of eleven artists across five cities who want to make sure more voices get heard in the campaign to secure payments for artists when exhibiting in public galleries.

Based in Liverpool, Cardiff, Glasgow, Bristol and Birmingham, the Regional Advocates will be organising a series of events and actions to take place over the next month – whilst also raising awareness of the campaign with parliamentary candidates from all parties in their areas.

The aim is to get the Paying Artists campaign message heard by those people who will be making decisions about how the arts are supported in the coming years, as well as ensuring that artists’ voices from the across the UK get represented within Paying Artists.

The Paying Artists Regional Advocates are:

“As a professional working in an industry where the interpretation of ‘fair pay’ is flexible at best, I feel it’s important to do my bit to better the situation for the sector as a whole and for the generations of artists coming through in to a competitive and financially insecure field.”

“Since launch in May 2014, the Paying Artists campaign has won the backing of several high profile artists including Jeremy Deller, YinkaShonibare and Margaret Harrison. But as the general election approaches, it’s more important than ever that more artists’ voices are heard as policies are shaped and implemented.

“Through a series of regional events, The Paying Artists Regional Advocates will focus on empowering artists to make the case for transparency around gallery payment policies as the first fundamental step in promoting fair payment.”

Whilst events are very much in the planning stages – more news of these coming soon –  look out for  a series of Q and As with the Regional Advocates on a-n News over the next few weeks.