Doing it by the book: Peckham Platform's new era of independence - a-n The Artists Information Company 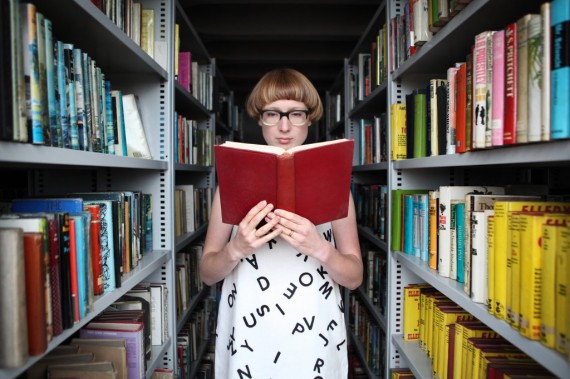 “The more I hang out in public libraries, the more I become enthusiastic about them because of the different ways people use them,” says artist Ruth Beale. “I’ve wanted to make a ‘bookbed’ for ages, so for me that was a starting point. I’m so happy with it.”

Beale’s participatory installation, Bookbed, is the launch exhibition for Peckham Platform, the south London venue that sits across Peckham Square square from the distinctive, Will Alsop-designed Peckham Library. Formerly Peckham Space, the organisation is now a fully independent creative educational charity, having flown the nest of University of the Arts London (UAL), its parent institution.

The entire Bookbed show echoes the functions of a library, creating a useable space and inviting the public to play and learn freely. “People can roll around on the ground, they can read on the bed, or have a reading group,” adds Beale. “The writing on the bed came from a series of workshops about dreams that I did with young people at Peckham Library; dreams encompassing imagination but also aspiration. I wanted to talk about using the library to expand your mind in different ways.”

It’s not just in Beale’s exhibition that Peckham Library looms large at the venue. With its colourful, raised design, the library resembles a blinking mothership standing above the small vivid green capsule that is Peckham Platform. The visual relationship between the two buildings is perhaps an apt metaphor for the exploratory adventures that lie ahead for the newly independent organisation. It’s also apt because Peckham Platform is about learning as much as it is about contemporary art and socially-engaged practice.

With its innovative and responsive co-commissioning model, which sees every exhibition developed in collaboration with a local partner organisation, Peckham Platform is in a good place to go it alone as an independent charity. Initiated in the early 2000s, the idea for a public gallery on Peckham Square opposite the new library was made possible through a European fund for civic squares. After a series of bureaucratic delays, it opened as Peckham Space in 2010 under the directorship of Emily Druiff, now executive director of Peckham Platform.

For the first three years of its life, the gallery has been one of UAL’s many ‘Spaces’ (Chelsea Space, Wimbledon Space, etc). With independence comes a new name that suits the remit of the gallery as a platform for wider creative educational activity. Says Druiff: “The original aim and ambition for it was to create a visual arts space that would encourage young people to progress on into creative higher education. It was something that I felt really passionately about.”

Druiff believes that Peckham Space has delivered this vision and that its new incarnation will further enhance this provision. Maintaining strong ties with UAL, Druiff is excited that Peckham Space is working closely with Central St Martins to develop its curriculum on social engagement. “The Department for Widening Participation [at UAL] are extremely committed,” she says, “so much so that they’ve continued funding us even now we’re independent.”

Going it alone in this harsh funding climate might appear a big risk, but Druiff’s can-do attitude has already made the project come a long way. “When I originally applied for the job [at UAL], there was no money for a programme and I was appointed on three days a week. At the time that seemed like an impossible task but I made it happen,” she says.

“We’ve been open for three years and we needed to develop strategically and have a board of trustees. It’s not as secure but it’s much more exciting. Now it feels like it’s really possible to have a shared vision with a board and a chair, and we’ve been able to develop a much more diverse income stream. We’ve also been able to apply to a much larger range of funding because we’re a charity.”

What’s next for Peckham Platform? There are plans to extend its socially-engaged practice, with longer-term embedded commissions, including use of the shop next door, number 91 Peckham High Street, for a series of international artists residencies. “What I’d really like to see happen is more capacity staffing-wise and I’d like to see us engage much more with the contemporary debates around social practice,” says Druiff. “To see us become a resource, and try and disseminate some of the findings that we’ve come across through our projects.”