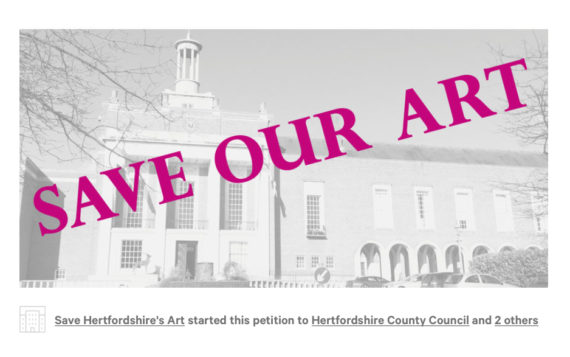 A petition has been launched urging Hertfordshire Council to reconsider its intention to dispose of 91% of its art collection. Save Hertfordshire’s Public Art Collection has already amassed over 900 signatures and urges supporters to sign up before the end of March, when a public consultation by the council comes to a close.

The petition states that a majority of the collection, which began in 1949 as the Hertfordshire Schools Art Loan Collection, was purchased with public funds.

As well as the risk that many of the 1659 artworks being disposed of could go into private hands, the petition raises the wider significance of this collection, as not only a part of Hertfordshire’s heritage, but also as one of the few remaining local authority school art loan collections.

The campaign to save the works demands that the council:

The council are proposing to dispose of 428 works initially and then make plans for the remaining 1,232 works later in 2018. To this end, the council has held two week-long consultations for each of the five different collection categories.

Starting from 22 January 2018, the first four consultations for acrylics and oil paintings (112 works), drawings and watercolours (70 works), lithographs and silkscreens (95 works) and aquatints and etchings (114 works) have now closed. The fifth category of miscellaneous works, comprising 37 items, ends on 1 April 2018.

As part of the consultation the council is asking members of the public to notify them of any particular local relevance of a piece of work and also invite expression of interest from those who would like to acquire a work. It states that money raised will be used for the conservation of the remaining 167 works that it intends to retain as a small collection.

A spokesperson for Hertfordshire Council said: “[T]he evolving curriculum, modern technology and the interactive approach of local and national galleries and museums has made this service redundant. Many of the works are currently in storage, where some are deteriorating and need conservation work.”

“We want to dispose of these artworks to ensure that they can be looked after in the future and we can focus on maintaining and improving public access to a smaller Hertfordshire significant collection… If sufficient signatures are obtained, the petition will be considered by the appropriate council panel.”

Save Hertfordshire’s Public Art Collection believes that there are further options that still need to be explored, such as a collaboration with the county’s museums and galleries. The campaign states that the estimated £300,000 net proceeds from sales is only 0.03% of the council’s annual budget.

Petition founder Armaiti Bedford said: “The Collection is of cultural, artistic, educational, social and historic value. It places Hertfordshire into the story of British art and education, and is an important part of the county’s heritage. The Collection belongs to us all – it should be seen, used and celebrated.”

Hertfordshire Council’s Art collection consultation can be completed until 1 April 2018. Save Hertfordshire’s Public Art Collection petition is requesting that supporters sign it before the end of March

Amended, 23 March 2018: The quotes from Hertfordshire Council and Armaiti Bedford were added the initial publication of this article.