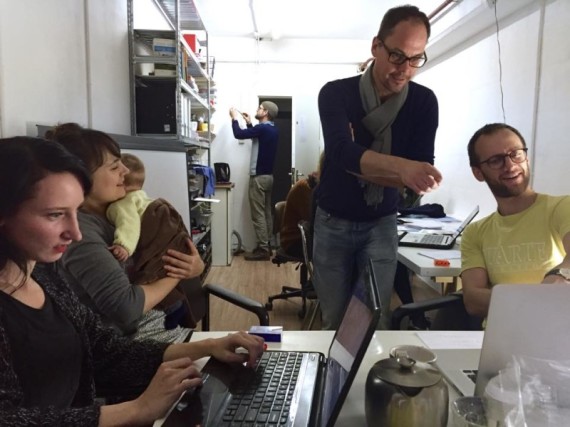 It’s no fun for an artist to be called a “parasite and subsidy guzzler” but that’s exactly what happened to practitioners in the Netherlands after a change of government reversed years of generous public support for the arts. Over night, artists were turned into a target for government vitriol and abuse in the national press.

That was five years ago and it fell to Rune Peitersen and a small group of other artists to oppose the new narrative. Together they launched Platform BK (Beeldende Kunst – Platform for Visual Arts) a self-described “active think-tank” – somewhere between an artist-led activist group and a strategic think-tank.

The group has gone on to become a healthy and vibrant force for change, launching new and innovative models of campaigning through its ‘Retort’ initiative. It has also been mapping the effects of austerity on the cultural sector as a whole.

Comprising around 300 or so active members, until very recently Platform BK has been almost entirely self-funded, the reach and scope of its campaigning far exceeding its budget.

The organisation emerged out of the need for representation and a feeling that the existing artists’ unions and membership bodies were not being effective in challenging the rhetoric and effects of austerity economics. This quickly led to Peitersen and his colleagues finding themselves at “some very interesting tables” and being invited to comment on discussions at the highest levels of government and the cultural sector.

I met Peitersen the night before we were both due to speak at the Manifiesta debate on cultural solidarity in Ostende, Belgium. He started by telling me that the cuts to culture in the Netherlands were disproportionate to those being implemented elsewhere and amounted to around 40%. He was at pains to stress that, because of the high watermark of funding they started from, artists in the country are still comparatively better off than many of their European counterparts.

One of the first things Platform BK did on being formed was commission a colour-coded map showing the effect of the cuts to the arts across the Netherlands. Initially hosted on Google Maps, it was then printed as a physical limited edition, one of which now resides on the wall of an office in the Cultural Ministry.

It’s interesting to note that it fell to the artists to defend the cultural sector on behalf of the institutions. But for Platform BK, no distinction is made between the health of the individual artist and the galleries they work with. 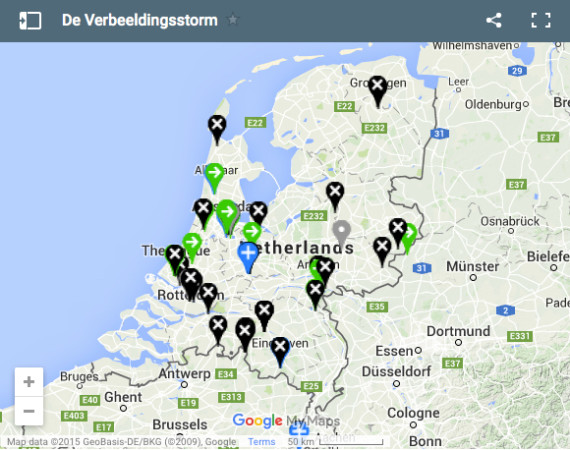 This contrasts sharply with prevailing attitudes in the UK. Here, the artist’s voice struggles to be heard and the conversation often seems more concerned with protecting staff and buildings than protecting the livelihoods of artists. There are some signs that this may be changing, such as the recent cooperation between a-n and CVAN in a Joint Submission on the Visual Arts to the Treasury in advance of the November 2015 Spending Review, showing a level of cooperation between artists and the gallery sector that has not been seen here for many years.

What Platform BK found was that the artist-led and the experimental sector were bearing the brunt of the cuts and this was directly affecting the ability of less established artists to create new work and earn a living. The heritage sector had fared better through judicious use of reserves and had managed to mask and mitigate the worst effects of the cuts.

These reserves are now coming to an end and while the political climate has changed, with the centre-left Labour Party now part of the ruling coalition since 2012, the improved rhetoric has not been matched by increased funds. A standstill funding settlement this year effectively means further cuts.

Historically, artists in the Netherlands were subsidised directly by the state with a ‘work stipend’, which provided an independent income for artists at all times. This meant that galleries didn’t see the need to pay artists because they were ‘already being paid by the government’.

A series of recent case studies conducted by Platform BK and funded by a group of major institutions shows that, like in the UK, 71% of artists do not get paid a fee for exhibiting their work. This is now being addressed by researching various models including CARFAC in Canada, the Swedish MU agreement, W.A.G.E. in New York and a-n’s Paying Artists campaign, to pull together a set of fee guidelines to fill the void.

Looking to the future, Platform BK is hoping to offer its mapping methodology to other organisations and institutions. “[It’s about] gathering information, making it publicly available,” says Peitersen, “from a simple belief that information can make you stronger.”

Peitersen thinks that a lot of people would be shocked by how little artists earn, but that without being labeled a failure or a scrounger it is difficult to find an effective way of getting that message across in the current political climate. He tells a story of how, following a public discussion about artists’ pay in which an artist made a presentation about how hard they work for little income, a member of the then ruling Liberal Party remarked: “What a poor entrepreneur!”

And there’s the rub – artists are often regarded as a one-person cultural business and if we are not making enough money to live on, then it must be our fault. Breaking the social taboo of not talking about how much you earn has brought the issue of artists’ pay to the fore and put Platform BK – a small but dynamic organisation – at the forefront of the debate around how we fund and pay artists in the future.