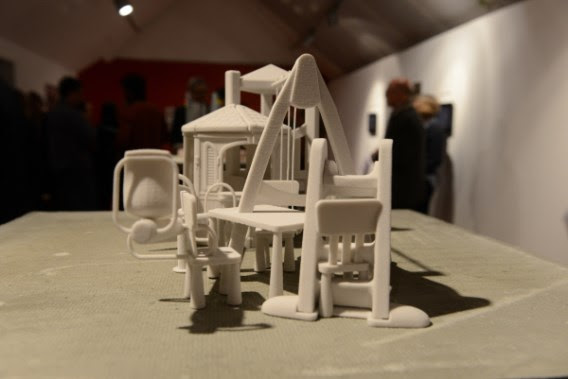 The Royal British Society of Sculptors (RBS) has announced London-based artist Rupert Norfolk as the winner of the [email protected]: Public Art Award 2017 for his proposal Playground.

The £10,000 award will support the cost of producing a large-scale version of the proposal which will be exhibited in the sculpture forecourt at RBS in South Kensington, London, in 2018. Norfolk also receives mentoring from professionals within the industry to develop and realise his proposal over the coming ten months, along with a solo supporting exhibition of his work at RBS.

Norfolk’s work involves the use of computational processes to reconfigure real objects within the abstract space of software, before re-materialising them to be encountered physically. Because digital space is not subject to the laws of physics, the resulting sculptures can appear both puzzling and incongruous.

Described as a ‘reinvention and compenetration of familiar childhood play equipment into one singular abstract form’, Playground looks to arrest any mobility associated with structures such as swings and seesaws, allowing their animation to come alive only in the spectator’s imagination.

Norfolk was selected from a shortlist of five artists, whose proposed works all responded to the theme ‘The Poetics of Structure’.

Initiated in 2009 the [email protected]: Public Art Award provides a platform for one sculptor to enter into the competitive realm of public art. Previous winners include Tabatha Andrews MRBS, Sam ShendiMRBS, Jenske Dijkhuis and Suresh Dutt and Robert Worley.

The [email protected]: Public Art Award 2017 Finalists Exhibition continues at the Royal British Society of Sculptors, London, until 5 May 2017. rbs.org.uk