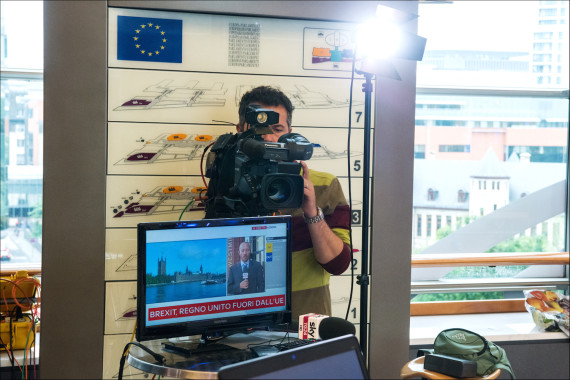 “How different is the art world from the ‘Westminster Elite’ that is the subject of such contempt?”

The UK vote to leave the EU is a life-changing event. It will affect us all, at individual and societal levels, for years to come and in unforeseeable ways. Most of us are still in shock, searching how to interpret it. I have no better answers than anyone else. I sense that the crisis demands some humility – and especially from those who, like me, are lucky enough to be asked for an opinion, to have a platform, to be read, heard, seen.

Part of the explanation for what has happened, I think, is that millions of people feel that no one has listened to them for decades. I also think they’re right about that. Their desire to be heard may have been exploited but it was and is legitimate.

How different is the art world from the ‘Westminster Elite’ that is the subject of such contempt? It’s a painful question and I don’t wish to make facile comparisons. After all, every ‘world’ includes people with vastly different status, power, values, experience and intentions – generalisation is dangerous. But that complexity may not be so evident from the other side of the city.

How will Brexit affect artists and the visual arts in the UK? I have no idea, but I fear a closing down, drawing in, a retreat into safe territory. If artists have anything distinctive to offer, in a situation to which we are all challenged to rise first of all as human beings, it may be in enabling conversations to happen. And that begins with creative listening.
François Matarasso, independent writer and researcher with a focus on arts practice, theory, policy and community-based arts. Read François’s A letter to my friends in the European Union (including, for now, the British), parliamentofdreams.com

“The real reasons for disaffection and inequality are to be found in a global economic system not simply EU bureaucracy.”

Here at mima we are pretty devastated by the outcome of the Referendum for many reasons. Many of our key partnerships and friendships are embedded in European networks and facilitated by the EU. Our major project right now is the ‘Uses of Art’, a five-year programme with the L’Internationale confederation of museums, funded by the EU Culture fund.

But this is not just about money, it is a cultural issue – these relations and networks provide an ecology of dialogue, exchange, research, learning and best practice that has real social impact and this decision quite simply severs that pipeline.

Of course we can rebuild relations and projects, but this is not what we needed right now. The real reasons for disaffection and inequality in our country are to be found in a global economic system not simply EU bureaucracy. Brexit will not solve this, conversely it will make it far worse.

One of the views here in the north east of England is that it surely can’t get any harder, but history makes me not so sure. The Brexiteers’ cries to ‘regain control’ and pump money into the NHS are already fading as the reality sets in and I certainly have no faith in these characters to have a line on culture, social justice or education.

Their policies are for an age that has long passed, today’s complexity makes any independence a fantasy; we began selling our sovereignty the moment the markets opened up in the ’80s, so why cry over it now? The Generation That Stole Our Future have just gone for a joyride and torched it.

There must be a concerted, thoughtful movement in another direction that is based on the values and realities of the 21st century – of collaboration, complexity and generosity – that the culture sector must drive as much as anyone else. I hope our artists and institutions rise to this duty.
Alistair Hudson, director, Middlesbrough Institute of Modern Art

“More than anything, I am fearful of a climate in which xenophobia and isolationism prevail.”

I am fearful of the limitations our leaving the EU will put on the free and easy movement of artworks and also of course on artists’ ability to live and work in different places. How attractive will Glasgow or the UK be for artists from elsewhere now? We don’t yet know what the impact on duty on artworks will be – but there is sure to be a change and the temporary import of artworks from the EU zone for exhibitions will undoubtedly be more difficult and/or costly.

On a practical level, we are already finding that the fall in the pound is costing us dearly with projects currently in production and how we manage that short-term is a challenge. No one knows how long we will have to manage in this respect, and that uncertainty will make budgeting nigh impossible for a while.

More than anything though, I am fearful of a climate in which xenophobia and isolationism prevail. I have always relished art’s ability to transcend national borders, boundaries and constraints, so maybe we need it more than ever now – however hard it will be to preserve our commitment to it in the face of years of legal wrangling and financial turmoil. Maybe the only thing we can hold on to is that fortunately ideas are always free-flowing!
Katrina M Brown, director, The Common Guild

It’s irrelevant to me how it [Brexit] will impact art and artists; I feel my home is a place where the majority are racist, selfish and greedy. I just can’t accept that as a truth.

I didn’t believe this would happen. It now seems like even Trump is possible.
Haroon Mirza, artist

“We need to have a positive, solution-orientated approach and to work collectively, not just in our sector, but in wider society.”

It is very early days and it is difficult to forecast the future with such rapid developments in these few days following the referendum. Assuming we are unable to reconsider this momentous decision, which I regret, I think we need to have a positive, solution-orientated approach and to work collectively, not just in our sector, but in wider society, to manage risks and to have a balanced debate.

Modern Art Oxford has been firmly international in outlook since it was founded 50 years ago, and I do not see this changing despite the practical and bureaucratic hurdles that may now lie ahead.
Paul Hobson, director, Modern Art Oxford

“The flight of cultural capital has begun and who can blame any of us for fleeing this awful chaos.”

I, like many artists, have an internationalist outlook and after the initial shock and anger started to subside over the course of the weekend, I began to urgently examine my options for retaining my European citizenship, which, for me, goes to the heart of who I am. The day after the referendum, I felt like a stranger in my own land as I walked around the streets of Brighton, looking at everyone I locked eyes with, wondering if they had voted out. I haven’t experienced this level of suspicion in our shared public space since the aftermath of the 7 July bombings in London.

With the country effectively leaderless and months of chaos and instability lying ahead, I am looking at whether I can claim German citizenship, as I already spend a significant amount of time each year in Berlin and have an address there. My adult sons are similarly investigating their Italian heritage on their mother’s side, a process that is complicated by the loss of some necessary official papers.

At the same time, newspapers in Northern Ireland reported on Friday that Post Offices had already run out Republic of Ireland passport forms and my friends with Scottish heritage are telling me that they are already looking north of the border to a possible future in a post-independence Scotland.

So the flight of cultural capital has begun and who can blame any of us for fleeing this awful chaos. Some will say that those looking to move elsewhere should stay and fight, but as someone who has already campaigned hard for a Remain vote with my @artsforeu campaign I feel I have no fight left in me – it is time to retreat and consider mine and my children’s future. I suspect a lot of other artists will be doing the same if they have such an option.
Joseph Young, artist, activist, and cultural producer. artofnoises.com

“You enjoy the novelty of the situation, as it feels like a kind of freedom, and yet you are not content.”

And, in his short text, artist Gordon Shrigley asks us to guard against the turn to the tribal, whether that be of the left, right or liberal nowhere, and to think of possibilities that do not simply replicate the old order:

A Moment of Exception

Would you believe me if I said I could draw a picture for you – no, not a big picture, but a small one – which would invite you to look and drift a little within its vague and yet exquisite materiality?

Somewhere along the way whilst you look into the picture, you may realise, perhaps slowly at first, that you are being sucked into another world, a world in which past certainties are seen to dissolve and float effortlessly away.

You might even try to hold onto some passing theme, which softly upon touch dissipates and envelops you. All is unclear, free floating, without border, as you are aware that you are inhabiting something, but this something constantly evades you.

You are confused. You enjoy the novelty of the situation, as it feels like a kind of freedom, and yet you are not content.

A deep stagnant blackness starts to smother you. You feel alone, worthless, without meaning or direction. “Where am I?” you cry, no answer, you repeat the question as if a mantra, but still no answer. It starts to dawn on you that you are lost, in what appears to be an endless sea of nothingness. You must find a way out, but how?

Gradually, through shear desperation you start to impose on the situation you find yourself in distinctions, which somehow help to break down the emptiness that surrounds you. You are half aware that such distinctions are an illusion, but for the moment a necessary one.

Your distinctions start to take on the character of a belief, unquestionable, unreflexive and permanent. For you are dimly aware that to step back from such beliefs is to fall back into the abyss of meaning, to float without direction, which you have tried so hard to get out of.

Others share your condition, they seek you out to confirm their illusions, they invite you to join with them, to form groups, coalitions, organisations and friendships. You tell yourself you are happy, you are on the right track, and sneer back at others who sneer at you.

Life passes you by well enough, apart from the odd depression, which always seems to return you to what you fear most, your existential void. But somehow you cope and give a silent prayer, to who you do not know, that your life has at least some meaning.

a-n’s Executive Director Jeanie Scott outlines how a-n will continue to support its membership as we navigate uncharted territory.

Clymene Christoforou of ISIS Arts reflects on the spirit of collaboration that our EU status has enabled amongst British and European artists.

Geoffrey Brown of EUCLID offers an overview of the practical implications for those interested in developing partnerships and applications for EU funding.