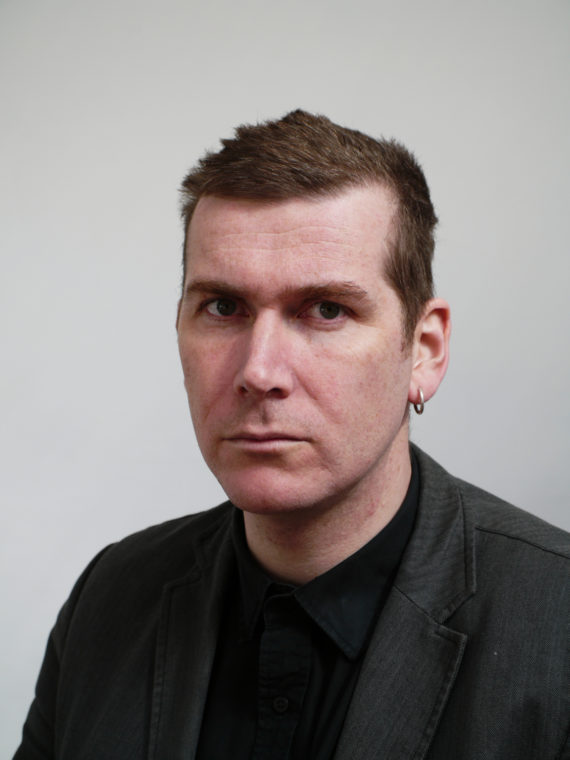 Welsh artist Bedwyr Williams works with digital animation to make films that are often fantastical, surreal and humorous. He frequently explores the idea of a dystopia, creating a loose narrative thread woven with stories of ordinary yet idiosyncratic lives.

Williams was shortlisted for the Beck’s Futures prize in 2006 with an interactive installation, Walk a Mile in My Shoes, where visitors were invited to clomp about the ICA gallery in a pair of the artist’s size 13 shoes.

He represented Wales at the Venice Biennale in 2013 and in 2015 he was part of British Art Show 8. Last year he was one of the artists nominated for the Artes Mundi prize, which takes place biennially in Cardiff.

In 2016, he created an immersive and surreal multimedia exhibition, ‘The Gulch’, at the Barbican’s Curve Gallery. Working with the spoken word he’s been a performance artist, and he also once tried his hand at stand-up comedy but says he found the audience a ‘bit weird.’

Tell us about Hypercaust, your new film at the Storyhouse in Chester, which takes the ancient and not so ancient history of the city as its subject.
Someone told me that in the 1960s, when they were building a new shopping centre in Chester, the remains of the Roman bathhouse were found. So, in my video we see a computer model of the bathhouse. There’s a chap called Julian Baum, who I came across when I started doing my research about the bathhouse. He’s an amateur historian who lives in Chester and who makes 3D computer models, so I was able to work with him and get a copy of the model for my film. The voiceover will relate more recent stories about the town.

Your work always looks very technically ambitious. Do you always work with animators?
I usually work with people who are either filmmakers or animators. I like getting people who are good at certain things, things that I don’t have time to train to do myself. It’s great that I was able to work with Julian. I was going to get my own animators to make a model, but Julian had the exact thing I was looking for. I also learnt a bit about Chester just talking to him. Then the Cardiff-based animators I usually work with created the texture on the walls and the steamy atmosphere of the bathhouse. It’s basically the bathhouse on a moonlit night, with no people inside it, but a voiceover telling a non-linear narrative.

So what’s the story you’re telling about this Roman bathhouse?
There are going to be three different scenes of the bathhouse that we see. One is of the hot baths, then there’s the basilica, which has a kind of bathing pool in it, then the hypocaust itself, which is the heating system underneath. The floor furnaces would have been kept burning for 24 hours a day, so the baths would have been steaming at night as well, even when they were empty. The film revolves around these different scenes in a fairly cinematic way. But the voiceover won’t be about the bathhouse. I’ve been collecting odd stories from local newspapers in the Chester newspaper archives in order to create my narrative. And obviously the stories are from a completely different era to the bathhouse itself, because I wanted to take the viewer to a space that was out of time.

Tell us something you’ve read in the course of your archive research that will either amuse or amaze us.
I read this account of a meeting in the town hall where one of the councillors pulled out a plastic bag full of human hair and he said, ‘This is how much hair gets caught up in the filter of the swimming pool every week.’ And I’m guessing that it was to do with men wearing their hair a bit longer in the ’60s and ’70s and it was overwhelming the pool filter. It’s actually that kind of thing that you probably wouldn’t get reported in a newspaper these days, since it’s really small town stuff. Oh, and there was an arsonist who was rumbled because his eyebrows were singed. It’s that kind of amusing, sometimes tragi-comic story you used to find, but don’t any more, in the narrow columns of local newspapers.

Commiserations on not winning the Artes Mundi prize in your home country. I loved the film you showed. What appears to connect your work thematically are these tales of ordinary yet idiosyncratic lives lived behind closed doors.
Yes, I guess because in my lifetime I’ve seen changes in how people are. From people walking down the street wearing fairly ordinary clothes, or women doing their hair but not to some cat-walk level, and men not plucking their eyebrows, to where we are now, where everything is kind of to do with show and presentation. Somehow the kind of charming banalities of British life that British writers have always written about – the great sitcoms, for example – have been lost. We’ve become too slick. That awkwardness of being British, you know. That’s what feels so great about old people. Not their voting habits in referendums, but the way they seem to puncture that a bit. I like that. Those local newspaper stories were like small signifiers where those differences were noted.

As a Welshman, were you influenced by Dylan Thomas’s Under Milk Wood at all? I’m thinking of the idea of these ordinary lives in small communities that are somehow made unique and idiosyncratic.
Well, I remember really liking Under Milk Wood when I was younger. Actually I’m a real Dylan Thomas fan. Maybe that idea of trying to describe those lives… I think there is definitely a link there.

You’re a performance artist too. How does this complement your film work?
I’d say the digital work has more or less replaced the performance work. What I eventually realised was that doing performances meant that I was just being asked to do things at the openings of other people’s exhibitions. I had a bit of an epiphany when I represented Wales in the Venice Biennale (2013). I realised that if I made a video that it would have all the ingredients of one of my performances but with a visual element. Since then I haven’t looked back.