A Q&A with... Emma Hart, artist with an eye on the domestic - a-n The Artists Information Company 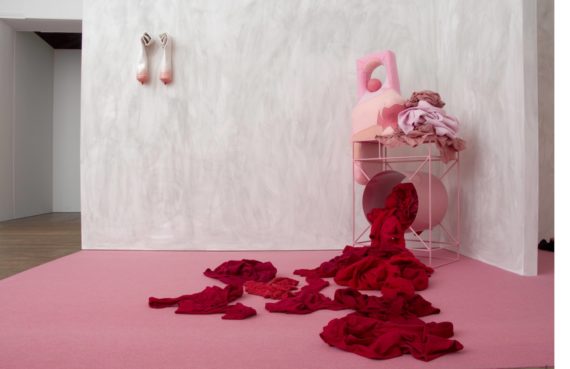 Taking the once popular seaside puppet show Punch and Judy as its reference point – with its riotous mix of slapstick violence and absurd comedy – ‘Love Life’ is an intensely physical collection of work overflowing with the frustrations of domestic life.

Featuring a range of sculptural works presented in a room-like installation, it includes visceral ceramic pieces alongside textiles, a sound installation, and a darkly comic film featuring the artists in fake Punch and Judy noses.

Filmed across both artists’ homes, the film is new for the Grundy show and acts as a conduit for the wider exhibition. “It’s impossible to do everything together, especially because we were both doing other things,” says Hart of the pair’s approach to collaborating for the show.

“We were in constant conversation so although many of the works were made individually, Jon and I would say, ‘I want to do this’.”

Hart, who won the 2015-17 Max Mara Art Prize for Women, was speaking as she installed her solo Whitechapel Gallery show, ‘Mamma Mia’, the result of six months in Italy as part of the Max Mara award. 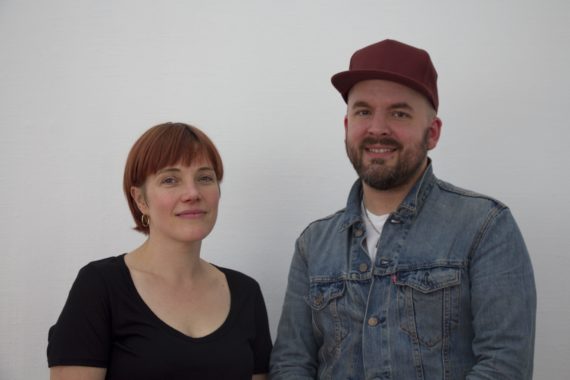 What came first, the Punch & Judy theme or a desire to reflect the tensions that can boil over in the domestic sphere?
Me and Jon have been talking about this show for a long time – we met in 2012 – which was before I’d had a kid. So I think the Punch and Judy idea came from discussions about mutual interests across our work. We did a residency together in Wysing and we share an interest in the handmade, the grotesque, violence. And so it seemed like Punch and Judy was a really good idea for us. And then of course life happens… I never really feel comfortable discussing anyone’s life other than my own, which is why I often use autobiographical details. But I don’t want to say that the show is about me, but an interest in everyday domestic life and how that can get out of control… I guess that’s a reflection on both of our lives. 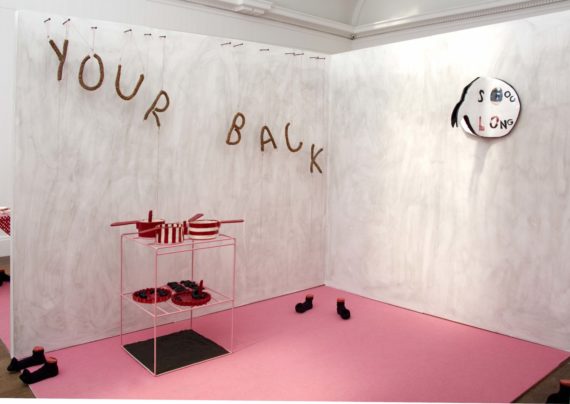 What’s your take on that domestic sphere?
Jon doesn’t have a child, but I think something we are thinking about is, actually, there’s a Punch and Judy in all of us. The domestic is often romanticised but it’s also hell on earth sometimes; the domestic is where we go through every single emotion quite regularly. It’s a very dramatic place, you can go from anger to love without leaving the house. So we were thinking how one of the reasons Punch and Judy [was] so popular is because there’s a degree of recognition of how easy it is to trip into those Punch and Judy scenarios – rather than the actual violence – in your own kitchen.

I guess the home is where we allow those feelings to bubble over, whereas in the public sphere we mostly keep them bottled up.
Exactly, it’s like that tipping point. The domestic sets us all up to be a bit Punch and Judy; the privacy and intimacy which are heralded as good things actually allow us to be pretty horrible sometimes. 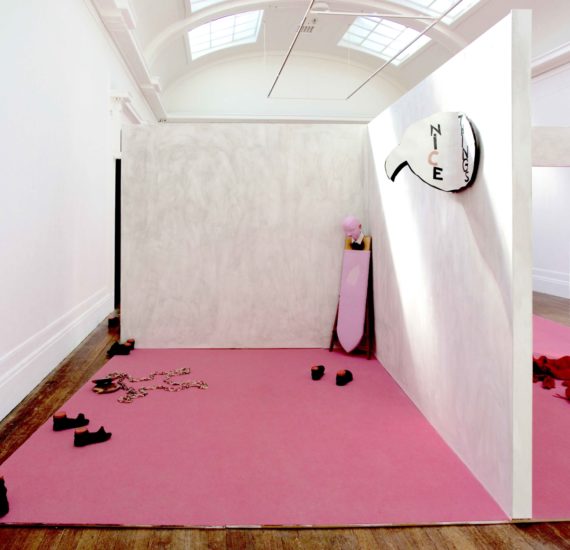 Black socks on ceramic feet that seem to have gaping mouths are a recurring motif throughout the show.
That just came from looking at my hands; sometimes they’re inside socks doing sock puppets! And also, it’s that motion when you get your hand and do that open and shut mouth thing and you go ‘Yeah, yeah, yeah’, if you think someone’s nagging. So I was thinking about hands and feet and socks, and then feet pacing around and hiding, how you occupy a house and stand – nagging feet, basically.

It relates to the scene in the video in the show, when you purposely stand on Jon’s foot as you pass on the stairs – a powerful but petty act.
Which is what the domestic turns you into – it makes you petty.

Was exploring such an idea and making the work for the exhibition quite a cathartic experience?
Well, we had a really good time making the video, which is a new work for the Grundy. We had such a good time because we’re mates and we get on, but also we were filming it in our own houses and it did allow us to vent some domestic frustrations.

How did you go about making the film – was it rigorously mapped out or did it evolve to some extent during the making?
We were pretty organised. We had a list of scenes to shoot and it was quite a long period of filming because we were across two sites. But things did emerge that we didn’t expect. We knew we were going to have two cooking scenes – Judy bashing dough and Punch cooking sausages – but then we realised that we could combine those two scenes to really bed in some hatred there. We tried to feed all the elements in the show through the video. There’s definitely a very strong relationship between the video and the rest of the show. 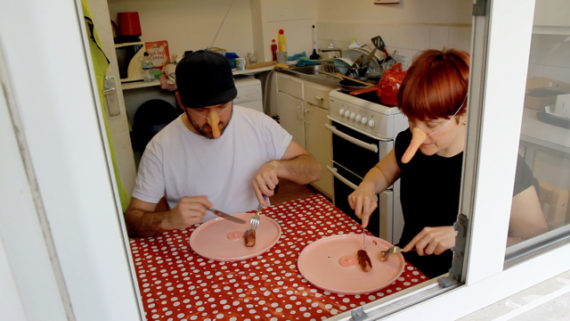 It’s a very funny film albeit also quite disturbing.
That’s the confusion about Punch and Judy, really. It’s funny, it’s a rip-roaring, slapstick piece of entertainment – and that was in our minds all the time, that Punch & Judy is entertainment. But at the same time it’s really horrible and everyone dies. And so the video treads this line, and it is funny. But it is also quite sad, actually.

How did the context of Blackpool influence this second leg of the exhibition’s three-venue tour?
Partly conceptually because it’s a seaside town and partly logistically because it’s a bigger gallery than Peer and less of a white cube. So I think the show is much more active in The Grundy because we were able to build a set, create that staging [for the works]. And we were thinking much more about the purpose of Punch and Judy in Blackpool, and so it’s much more theatrical, we’ve built a scene or a situation which can be entered into, and not least we’ve got an illuminated thumb stick that was made by Blackpool Council’s Illuminations Department.

Why a thumb and a stick?
It’s said that up to about 150 years ago a man could hit his wife with a stick as long as it wasn’t thicker than his thumb. And then there’s that phrase ‘under the thumb’ and that cartoon image of the throbbing thumb. It just came out as an image. And of course Punch whacks Judy with a stick. 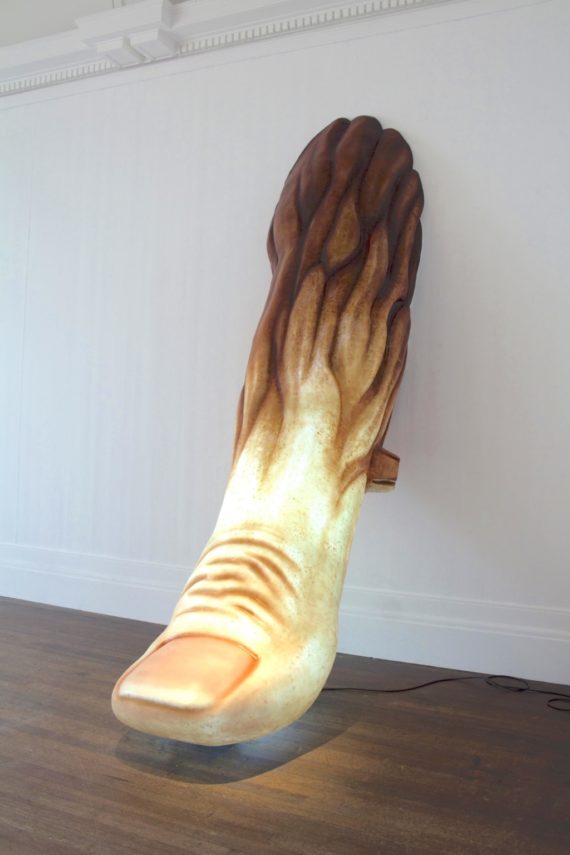 Can you talk about the Jon and Emma sound piece and the genesis of that?
It’s essentially a cover version of John and Marsha by Stan Freberg [made in 1951], which you’ll find on YouTube. It’s something I heard a lot of as a kid because my dad was really into him. And it’s two people calling out each other’s name and it’s like a compressed soap opera; they run through every emotion possible. So much happens when you use someone’s name depending on what tone of voice you use. So it is compressed but at the same time it’s really real; just saying a name in a different voice communicates so much and can effect everything I think.

And those different tones of voice are often only used in the domestic sphere. In the work sphere for example, we tend to talk in a particular way.
Yes, you’re pretty monotone; you’re never really that shrill, you really rein it in. But at home I just let lose. 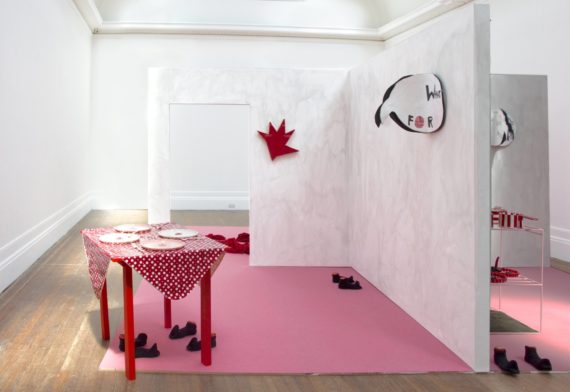 Going round the show, the physicality of the work, the presence of something tangible and tactile, is very strong.
The sense of a physical encounter was something that was already very important to both of us in our work but also Punch and Judy doesn’t really have a narrative, it was always traditionally described as a play of encounters and was understood spatially rather than on a timeline. The impact of being in the same room as something, in the presence of the work, is really important – as it is for any sculptural work.

How does your solo show at Whitechapel relate to ‘Love Life’ – is it very different?
It’s so very different but at the same time there are things I’m interested in that will always transfer to the next piece of work I make. So the domestic features or the family, there’s a bit of autobiography – it’s all in the show. And also it’s ceramic and all the work I made for the Grundy is ceramic. Actually, there’s also some noses in it, too. It’s come out of six months in Italy where I went to research an Italian psychologist and Italian ceramics. So, there’s still that interest in the psychological encounter with objects.