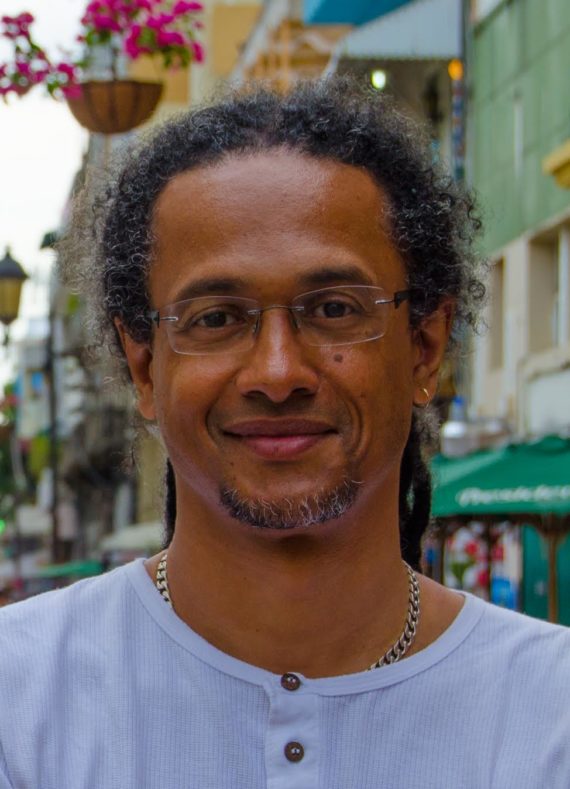 Kimathi Donkor lives and works in London and is among 12 artists featured in the Diaspora Pavilion at this year’s Venice Biennale, a display presented by the International Curators Forum and University of the Arts London.

Of Ghanian and Anglo-Jewish heritage, Donkor also has family connections to Jamaica and Zambia (where he lived for a while as a child). His work often draws on historical figures associated with black emancipation and liberation, such as the Haitian revolutionary Toussaint L’Ouverture and American abolitionist and humanitarian Harriet Tubman.

Awarded the Derek Hill Painting Scholarship for The British School at Rome in 2011, Donkor has exhibited internationally, and in the UK has had solo exhibitions at Iniva, Peckham Platform and New Art Exchange.

His work will be shown this summer at the International Slavery Museum in Liverpool to mark its 10th anniversary. 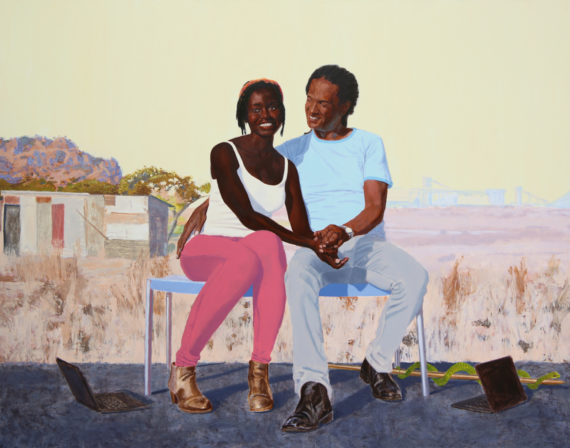 How do you think your work fits in with the idea of diaspora?
I’d say my work is very much aligned with the British black arts movement. I started out as a young artist back in the 1980s, when that movement was reaching a particular peak of activity. Artists like Keith Piper, Donald Rodney, Eddie Chambers, Sonia Boyce and Lubaina Himid were all having a strong impact. Their concerns were to do with memory, the transnational experience, and with questions around place, belonging and identity. These ideas have been embedded in my own practice. In terms of the narrative content of my work, a lot of it’s strongly related to the diasporic element of the black story. Diaspora as a word should open that out, and these are the concepts that grow from it.

Tell me about your display in the Disapora Pavilion
I’m showing four paintings: Toussaint L’Ouverture at Bedourett, Bacchus and Ariadne, Portrait of the Artist Helping with Enquiries, and For Moses had Married an Ethiopian Woman (Numbers 12:1).  Those include two works from my series about the Haitian Revolution. The black population is there through the transatlantic slave trade which bought Africans from mostly West Africa and Central Africa to the Caribbean to be enslaved for the European corporations. When you’re tackling that history, the history of the revolution for independence and emancipation, then you’re dealing directly with one of the principal aspects of the black diaspora, which is the legacy of enslavement and how that legacy is preserved and celebrated, or forgotten and repressed. 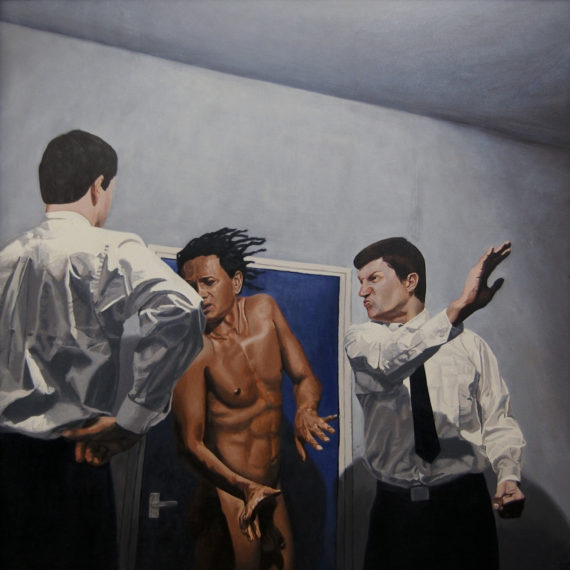 Are your paintings foregrounded by a lot of research? For instance, one painting, depicting American abolitionist Harriet Tubman [Harriet Tubman En Route to Canada, 2012] recalls a particular episode in her biography.
Yes, very much so. I completed a doctorate last year and I’m also a research fellow at Chelsea College of Art, so research is central to my practice. Some people might criticise my work for being didactic, but to a degree I think my work is about the process of acquiring and working with historical knowledge and sharing knowledge. So research is a fundamental part of my creative process. In fact, it’s an inseparable part of the process. And if you take the Harriet Tubman painting, which is based on a specific incident that she described in her journals, then for me, producing an image of that nature is a way of thinking about her words. The words open up a certain vista, if you like. 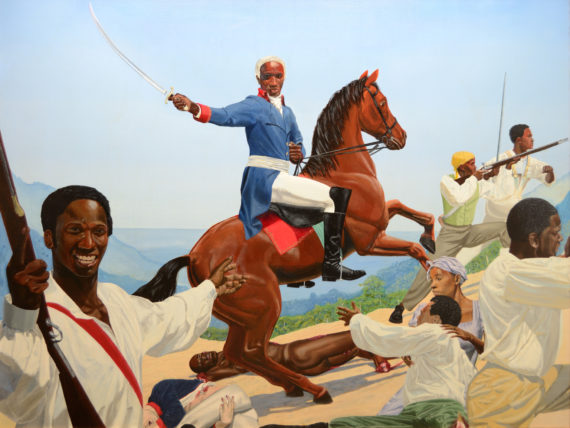 Are you happy with the label ‘history painter’?
Yes, I very much embrace that tradition. Obviously it’s a controversial tradition because of its association with state propaganda, and with all kinds of negative associations. But to me, it’s a methodology which still has a lot of potential for exciting the imagination. Although history painting is very much associated with a very Eurocentric approach to image-making, I think that’s something that can be shifted. I use some of the approaches that history painter’s use, particularly things like mythology, because I think a lot of my work is about the blurred area between mythology and documentation. My paintings are about the nature of truth and vision and how those two things relate to one another. 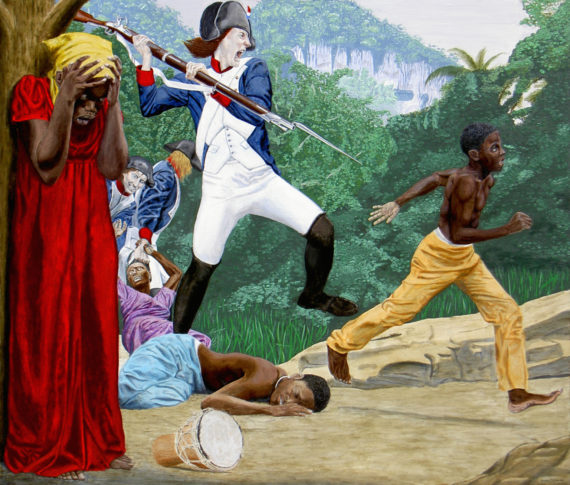 One relatively recent series of paintings is your Notebook series, which is a departure for you. Can you tell us a bit about it and how it came about?
I started creating the Notebook series in around 2013. And really it came about because I wanted to change my working method a bit. I use a lot of photography in composing my paintings – I go out and photograph people or I bring people to my studio. That’s a very important part of my creative process. I usually sketch ideas and then I do some more refined drawings, and then some photography and I also play with Photoshop or other types of computer program. But what I wanted to do from around 2013 was, I suppose, reskill myself. I wanted to concentrate more on that drawing phase and to reduce my dependency on machine imagery. I wanted to focus more on the power of my imagination, so things like designing the chairs the figures sit on, creating their clothing from scratch, and creating the figures themselves. So no observation, no photography, no model. 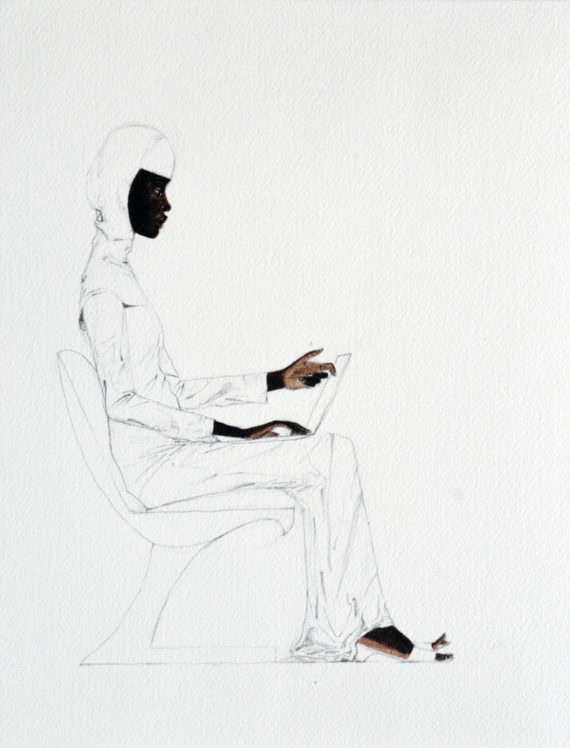 What are you working on currently?
My next show in the UK is going to be at the International Slavery Museum [in Liverpool]. It’s their 10th anniversary later this year. They recently acquired some of my works for their contemporary art collection, so these are going to be on display this summer. And I’m really thinking much more about ideas to do with the idyllic. I haven’t got a title for the work yet, but these new paintings are exploring idylls. I’ve shown some of this work in New York at the 1:54 Contemporary African Art Fair recently. It’s been something I’ve been working on for a couple of years.

Kimathi Donkor is showing at the Diaspora Pavilion, Palazzo Pisani S. Marina, during the 57th Venice Biennale, until 26 November, 2017