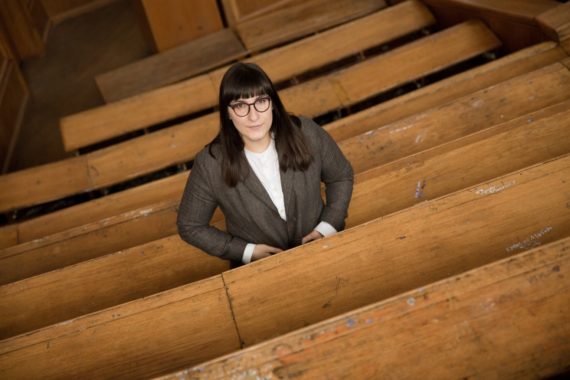 Russian artist Taus Makhacheva is known predominantly for her video-based works, often set within the evocative and vast landscapes of Dagestan and featuring a lone character attempting near impossible feats. Her highly acclaimed video work Tightrope is currently part of Christine Macel’s International Art Exhibition, ‘Viva Arte Viva‘ at the Venice Biennale, along with Baida, an invisible performance (scripted by Tim Etchells).

Enigmatic, poetic and infused with varying degrees of irony, her pieces invite the viewer to suspend their sense of disbelief as they question whether what they see in front of them is real.

In Tightrope, a lone tightrope walker precariously transports 61 works of art from one mountainous hilltop to another, the vast landscape and jagged rocks beneath a reminder of the intense personal risk that this creative act brings with it. The artworks he transports are to-scale copies from the Dagestan Museum of Fine Arts’ collection, a comment by Makhacheva on how, what and why art is collected and preserved.

With Baida, the sense of confusion and disbelief is intentional. At the far end of the Venice Biennale’s Arsenale, outside in the Giardino Delle Vergini, an information plaque announces a set of coordinates and details of a performance of an overturned boat at sea.

For those who go online to find the video documentation of this ‘daily’ event, it soon becomes clear that the seemingly unscripted conversation by audience members is actually the work itself. 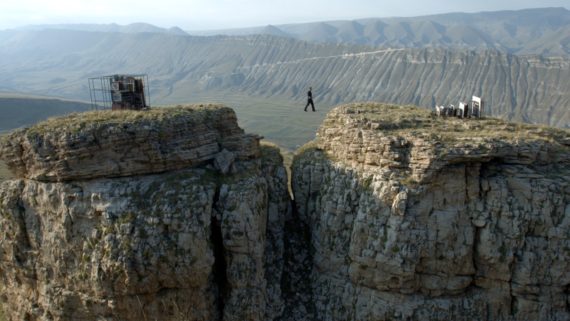 The history, landscape and culture of Dagestan is very prominent in your work. Could you say something about that?
It’s connected to a very basic feeling, this is the place I go to restart. A place that purely, simply recharges me. There’s a tradition of landscape within Dagestan’s history of art. For me, that theme of landscape carries on while becoming infused with other things. This is one thing I learned in my studies in the UK [at Goldsmiths and Royal College of Art], that you can combine different methodologies to create more complex systems with various meanings, rather than having just one easily decipherable thread.

My intention is different with every project. In Endeavour, I’m pushing a rock. Nothing moves for nine minutes. Underneath the rock is actually my ancestral home, so it’s about endeavours – it’s about pushing for, against, with, tradition. With Gamsutl, a dancer reenacts movements from the stories depicted in paintings, so this is a narration of a history of a site through choreography. 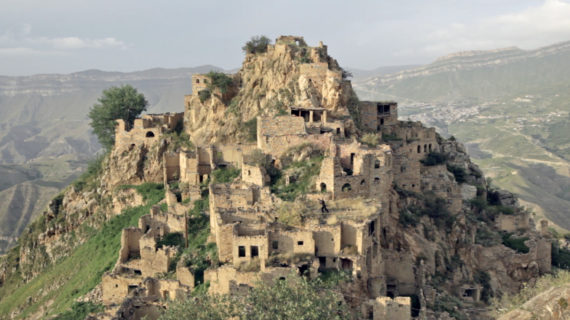 The first video with Super Taus that ever surfaced, shot on a dashboard camera of her pushing a huge rock off the road, is important for me because it became this viral video. It has a life of its own, which I like, because I think this is how Super Taus should also function. She won the Kandinsky Prize in 2016, as a young artist. When talking about her work, she uses words like ‘life-affirming practices’, not ‘artworks’, not ‘artists’ – unlike the way I talk about work. When I didn’t have time to produce a piece of art for Moscow Museum of Modern Art, I asked her to step in and go and fill the spot.

Untitled from Taus Makhacheva on Vimeo.

Baida, one of the pieces you did for Venice, is a text with the title of the piece, video documentation and coordinates at sea…
I started by asking myself, ‘What is the context of the biennale?’ Everything wants to grab you by the hand and pull you in and say ‘the bigger, the better, the redder, etc’. However, there is also the current situation of migrant boats sinking in the Mediterranean.

Around this time, I visited an Island in Dagestan where we interviewed a fisherman who had become stuck on ice with his son for 37 days. One story particularly struck me: during storms, the fishermen sometimes tie themselves to the prow of the boat when it capsizes so that even if they are not rescued, their bodies will be recovered. This very bold attitude to death became very poignant for me.

[For my work in the biennale] the only way I could resolve all of these thoughts was to have a text, coordinates, supposedly a performance that is happening and a journey that was ‘accidentally’ documented and not accidentally scripted by Tim Etchells.

So it is also a commentary on the art world at Venice…
I have these humorous conversations with some of my friends in the art world about this precarity that we’re stuck in – about how much you need to fight for things… this sense of precariousness when the biggest institution invites you to exhibit, and as a policy they don’t pay artists’ fees. I don’t think any of my colleagues are in a better position. This, along with these real stories that I’ve encountered in Dagestan, all came together in this slightly visible, invisible work.

What was the process of making and filming Tightrope?
I was working very closely with my friend and studio manager, Malika Alieva, who is also the producer of the film – well, she did everything! She designed the structures, she went to festivals of tightrope walking, tried to find a tightrope walker… We went together to a circus school, we looked through millions of videos trying to find someone. [Then] we went to a Russian state archive of film, photography and documents and that’s actually where I encountered documentation of the Abakarov family circus troupe for the first time.

Later we met Rasul Abakarov – he was the best tightrope walker we encountered at festivals – and realised that he is a descendant of this family. Although he was a bit unsure at the beginning about what we were trying to do, he also felt very strongly about how his skill is disappearing. For him, Tightrope became something very valuable and important.

[When it came to filming Tightrope] initially we we did a few tests with the security rope attached – I’m not particularly crazy, I’m not going to ask someone to risk their life for an artwork. However, Rasul said that he never walks a tightrope with a security rope and that he [didn’t want to perform for camera] this way. When we were filming, every time he walked, I looked calm, but inside I died. Micro-deaths were happening inside of me as I watched his crossings. 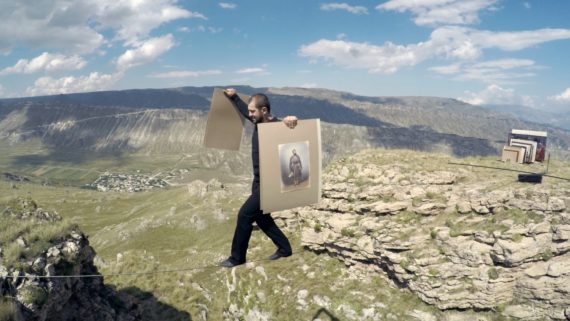 Could you say a bit about going from making works on your own, for instance as a student, to having a studio manager and a big team. How did that process happen for you?
It’s really incredible to have a person or two people who are thinking with you, who you discuss things with on a constant basis. It’s been around three years now. Dagestan is the only place where I can afford to pay a salary, so it’s not something really grand. Because of the way I earn income [through artists’ fees], it would be impossible to deal with the workload on my own. To have artists’ fees I do a lot of group shows, and for that you need other people by your side. I work well in big exhibitions and group shows because the work can build dialogue and connections. What is most exciting is that I can see the development of the works and how they start having different strands. You accumulate faith in yourself. This self confidence builds with projects and invitations and the conversations that you keep having with people. 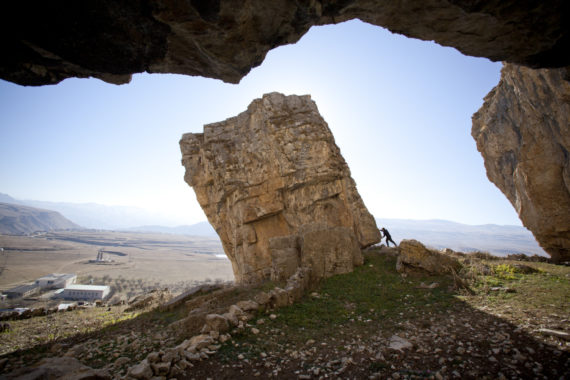