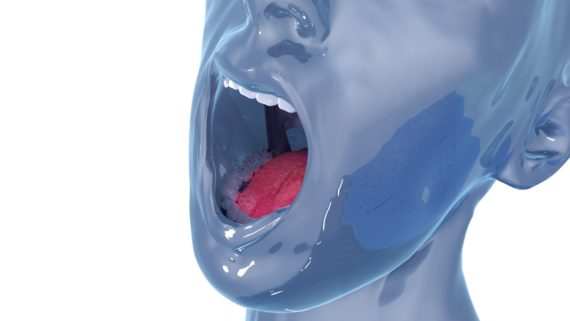 In some ways it seems like being queer has never been more part of mass culture. The LGBT abbreviation grows ever-less abbreviated as it becomes an inclusive conga line of Qs, Is, +s, and more, while the once controversial RuPaul’s Drag Race is now so mainstream it’s more like kids’ TV than the rowdy gay bars from which drag culture sprang.

In the context of this apparent mainstreaming of what some may feel is an inherently outlying category, two exhibitions at artist-led spaces look at what the amorphous, contested term ‘queer’ might mean for artists in the UK.

The recent ‘Queer Art(ists) Now’ at Archive Gallery, London, was an open submission exhibition. Its avowed intention was to attempt an insight into how the aesthetics, ideas and politics of queer artists might be finding expression through their practices in 2017. Or, as its publicity put it, to open “a window on what the fuck is going on”.

What’s going on is perhaps rather obviously sexuality, a lot of it overtly male. Artist, curator and writer Richard Dodwell, one of the selectors for the exhibition, acknowledges that, despite the organisers’ best efforts, this is indicative of an ongoing problem. Returning to that familiar string of letters again, it’s the Gs and possibly the Ts that are most visible in the visual arts, as in the LGBTQI+ rainbow.

Dodwell explains that there were low numbers of overall submissions from female-identifying artists, and despite active efforts to reach out and get more of them into the show, they were ultimately unsuccessful in this regard. This is not to criticise Dodwell or his fellow selectors particularly. Despite women being the norm in arts administration and among art students, it’s well known that collections, commissions, and exhibitions remain overwhelmingly male. The reasons for this are complex and deeply structural. 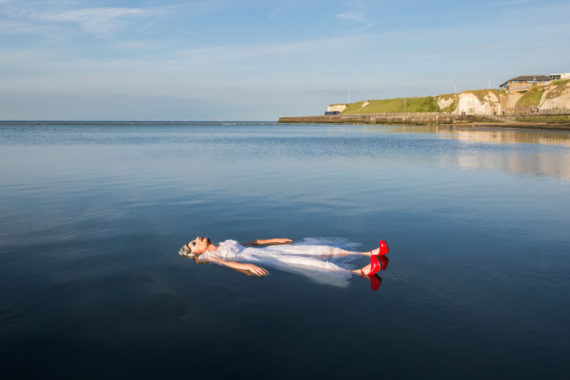 The upshot in this specific case is that the main paradigm seems to be overtly male expressions of the pornified dick pic and gay hookup culture. The latter is now as easy as swiping right and as ubiquitous as smartphones themselves, though it has its roots in the kinds of underground gay relations that went on long before they were safe for the participants, or legal in the UK.

From Chris Hudson’s picture instructing us to “obey the aubergine” (the emoji often used to represent a penis in text messaging) through Jeffrey Hinton’s framed litany of gay dating app clichés and buzz phrases, to the mercifully few portraits of disembodied actual penises, sexuality here is as unavoidable an issue as it is in the lives of most sexual or gender minorities.

The noticeable stepping away from gay clichés while very much still operating within a queer context is epitomised by Nigel Grimmer‘s portrait-within-a-portrait of somebody in a green Adidas tracksuit, perfectly colour coordinating with the textbook kitsch Tretchikoff ‘Green Lady’ picture that’s obscuring their face. As several of the artists I spoke to put it, and as the name of the exhibition already strongly suggests, it’s more about artists who are queer and that queerness going through most things they do, rather than there being any such thing as a neatly or definitively visible queer art territory. 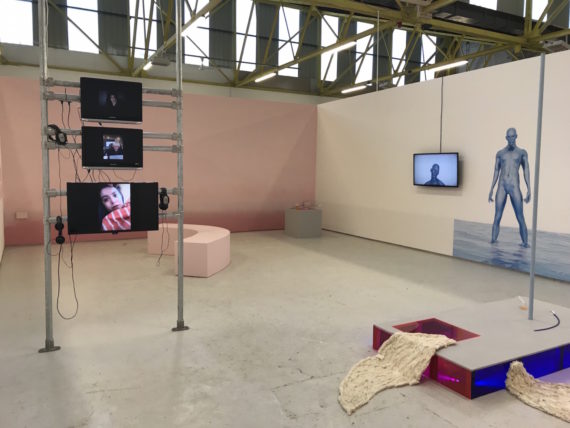 The current ‘Notes on Queerness’ at The Royal Standard in Liverpool has a similar mission to ‘Queer Art(ists) Now’. With its aim of “bringing together queer voices”, this four-person show focuses on performing queerness, directly in the flesh and through means such as Jake Moore‘s computer animations, or Alexander Glass‘s sculptures referring to his own experiences in gay clubs.

Emily Pope, whose homemade sitcoms “about Millennials living semi-legally” are in the show, also thinks it’s “a question of me being defined as queer, or lesbian, before the work is”. Pope doesn’t mind this, but goes on to point out that we’re still in a place where queer is defined as an ‘other’ and by what it’s not, in a world where nobody labels an artist as straight or imagines we could or should draw conclusions about them or the aesthetic of their entire cohort based on that one fact.

“Queer”, with its long and convoluted history as an insult and term of oppression, and simultaneously as a relatively recently reclaimed source of pride, is in either case about what is not normal in comparison to some assumed, abstract default. Glass, too, mentions an initial reticence to accept the term until he could get to grips with it as a way of identifying and demonstrating the “queering” of things outside of their usual contexts.

As with the dominant emergent theme in the London exhibition, Moore and Glass in Liverpool both overtly reference the aforementioned NSA (no strings attached, i.e. one-off meetings for sex) gay app culture – what Moore calls “fast transactions of anonymous sex” and Glass identifies as both a space of relative safety and, slightly more ominously but pretty accurately, “a hunting ground”.

It’s very noticeable, in person at ‘Queer Art(ists) Now’, interviewing the artists of ‘Notes on Queerness’, and at other artist-led projects like the recent Sluice events in Hackney, that when contemporary artists are able to make whatever they want it tends not to look much like what most galleries and curators are showing or would ever show. 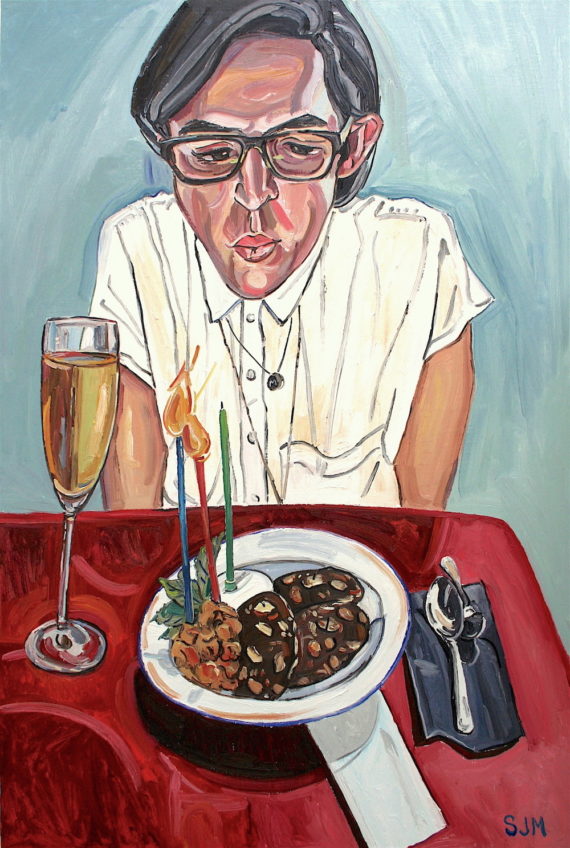 Often, there’s an unselfconscious daft humour, humanity and sense of fun that is apparently taboo in a ‘serious’ artist, and hence absent from most curated shows. Un-intellectualised emotional responses of any other kind also seem to be deeply uncool to art world grandees but quite prevalent among artists themselves and in their work, when they have some meaningful choice over what they make.

That there’s a more general and pervasive disconnect between the taste of artists and the preferences of so-called ‘tastemakers’ is no surprise, given that most curators, academics and on-staff critics are at least three or four years behind what artists or audiences are actually doing or interested in. What’s most cogent, though, is that many of the artists in these kinds of chaotic, multi-aesthetic independent shows can and do get commissions and make sales anyway. The painter Sarah Jane Moon, whose work was in ‘Queer Art(ists) Now’, confirmed as much.

Quite often, the artists in artist-led, independent exhibitions and projects fail in one way or another, whether knowingly or not. Obviously failure in art is a personal judgement, but to be hasty or tentative or crap sometimes, to try but not quite make it, are options that tend not to be available at all in any sector of what one might call the managed or dependent art world.

When even community-based social arts projects and funding bodies use virtually the same language of investment, measurable yield and productivity as commercial art dealers (or indeed the government and property developers), failure is not on the table because it represents ‘wasted investment’. More specifically, it’s not OK for artists to fail in these systems. The systems themselves fail all the time, of course, and the people in charge of institutional disasters or private embezzlements invariably fail upwards to another equally lucrative salary.

It’s not wise in most contexts for an artist to admit being vulnerable in any way, that they don’t entirely know what they’re doing, or otherwise to expose that although one can definitely get better at it, being an artist is not an objective science but actually – the clue is in the name – a subjective art. The queer label, if nothing else, gives notice that we are vulnerable and that we’re starting from a place where the majority viewpoint isn’t necessarily interesting, let alone paramount.

‘Notes on Queerness’ continues at The Royal Standard, Liverpool until 26 November 2017.
Queer Art(ists) Now was at Archive Gallery, London, 12-15 October 2017 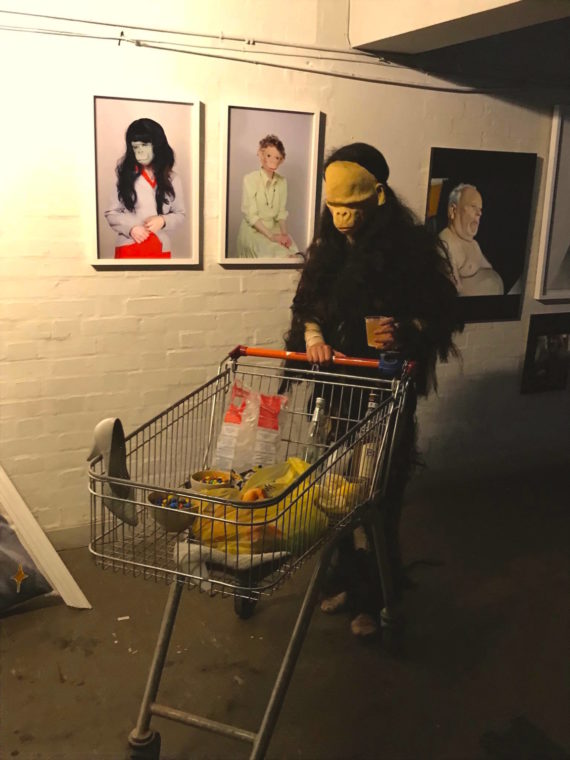