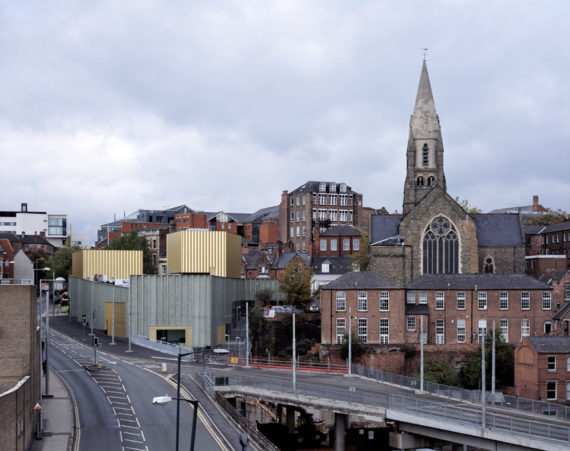 Nottingham’s visual arts scene is in a constant state of flux, with new networks, projects, collectives and organisations coming and going all the time. Even as I write, Nottingham Castle Museum & Art Gallery, the oldest art institution in the city (and the first municipal art gallery in the UK outside London) is winding down operations on the site it has occupied since 1878 in preparation for a £29.4 million redevelopment.

Its activities during the closure will refocus the exhibitions programme on Wollaton Hall, Newstead Abbey and other city council-run heritage and off-site venues. The redevelopment, scheduled to complete in around two years, will incorporate new visitor attractions, restore the 16th century fabric of the ducal mansion of the castle itself, and improve and increase the space available for museum displays and temporary exhibitions.

As the city’s most venerable gallery goes dark, there is no shortage of relative newcomers to fill the gap. Nottingham Contemporary and New Art Exchange bring high-profile national and international contemporary art to the city, while the well established artists’ studio groups at One Thoresby Street, Backlit, and Primary all host exhibitions, residencies and live events alongside activities initiated by resident artists. The three occasionally collaborate under the New Midland Group banner; Primary and Backlit were awarded Arts Council England NPO status last year, a development that stabilises the finances of both in the medium term. 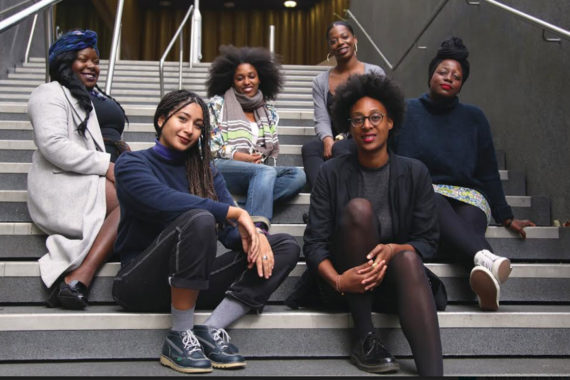 Alongside these are the volunteer-led Surface Gallery, a long-established training ground for curators, technicians, programmers and marketers now at larger institutions. Surface finances its core programming – including an annual street art festival and a series of graduate residencies – through rental income from its studio spaces and private hires, a model shared by the gallery space at former music hall The Malt Cross. A further exhibition space operates as The Lace Market Gallery, based at New College Nottingham.

Nottingham Trent University houses the recently refurbished Bonington Gallery and its current curator, Tom Godfrey – whose own white cube space, TG Gallery, is based at Primary – organises a programme of exhibitions closely relating to the interests of the Fine Art, Fashion and Design schools. Recent programming has encompassed both Ruth Angel Edwards’ purposefully chaotic Wheel of The Year !Effluent Profundal Zone! and the high-gloss minimalism of Artificial Sensibility by It’s Our Playground (aka Paris-based artist duo Camille Le Houezec and Jocelyn Villemont).

The city’s only commercial gallery, Syson, opened in 2013 with a project space adjacent to the media centre Antenna, and in 2015 moved to a new location opposite Nottingham Contemporary. Its programme to date has included shows by Blue Firth, Candice Jacobs, John Newling and S Mark Gubb, alongside group exhibitions like ‘Nature’s Ape’ and ‘Nine Painters’. Syson’s building also houses a music studio, craft workshops and Mould Map, a publication series “dedicated to New Comics and Narrative Art”, co-edited and designed by Hugh Frost and Leon Sadler. 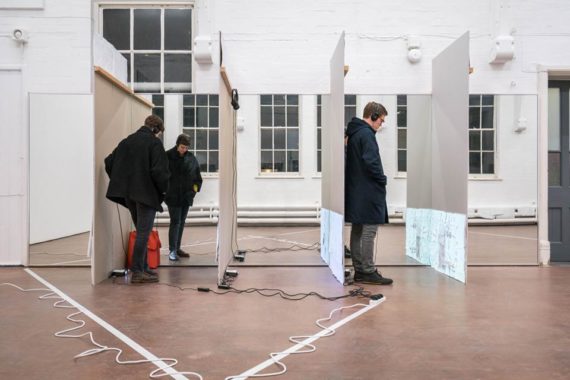 Djanogly Gallery at Nottingham University’s Lakeside Arts Centre programmes a mix of historical and contemporary work that reflects the Russell Group university’s strengths in art historical research. However, the closure of the university’s Fine Art BA course in 2016 – whose part-time nature and roots in the WEA made it of particular interest to mature students, notably women returning to education after raising children – has left the institution with little current stake in the ongoing development of working artists’ practices in the city.

Provision for continuing education in visual arts has, as elsewhere, shifted towards a model of extracurricular activity by arts institutions. The universities’ partnership with Nottingham Contemporary on its public programme has lately evolved to reflect current director Sam Thorne’s interest in alternative models of education, an interest partly brought with him from Open School East.

Other initiatives include the business development and support model of Real Creative Futures at New Art Exchange, with its emphasis on creative entrepreneurship. Graduates include Saziso Phiri, whose street art-based The Anti Gallery runs its own training and information sharing sessions and recently joined forces with SheAfriq, a black womens’ creative collective.

This commercial creative industries focus is also reflected in such disparate ventures as The Canning Circus Creative Hub, a traditional studio complex where artists, designers, musicians and others share low-cost facilities, and the Creative Quarter, set up with finance from Nottingham City Council and central government to pursue a creative regeneration agenda using venture capital models. 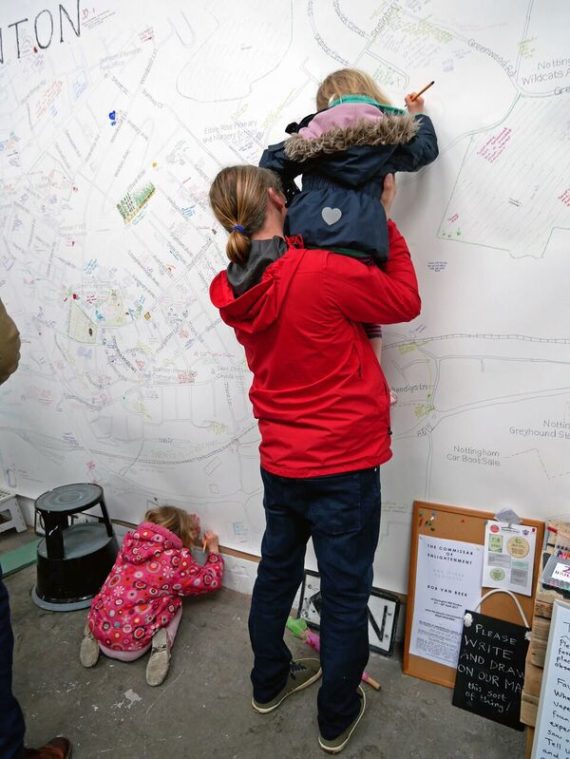 There has been some success in creating enclaves for independent businesses at Cobden Chambers and in the long neglected fruit and vegetable wholesalers’ units at Sneinton Market. But this has not offset a widespread feeling that its narrowly commercial imperatives and reliance on consultancy and high-level strategising excludes those artists and networks operating outside a handful of key cultural and educational  institutions. The danger for the longer term, if not quite the present reality, is that control over independent artists’ working conditions, access to resources and ability to shape the scene they operate in is being co-opted, draining energy from the grass roots.

There have been efforts to involve local communities, partly through such well-established organisations as City Arts, currently celebrating its 40th anniversary, and the recently opened Place, based on Sneinton Market for the next two years. Place is the new home of The Renewal Trust’s creative programme, which has previously brought Birmingham Royal Ballet, fashion photographer Rankin and The Caravan Gallery to Sneinton and St Ann’s. Inspired by such projects as Laundromat in Brooklyn, Place is trying out a way of working with artists to animate neighbourhoods and encourage creative solutions to community concerns.

This kind of emphasis on outreach and community engagement is welcome, though as Morgan Quaintance has recently argued, the tendency of organisations to perform outreach with young people and those not yet engaged in seeing and shaping art, necessary as it is, can often tacitly erase those artists already active and engaged but excluded by current hierarchies and structures. Nottingham’s visual arts scene seems to be weathering its difficult economic circumstances well enough, but there is much potential here that remains to be tapped and no room for complacency. 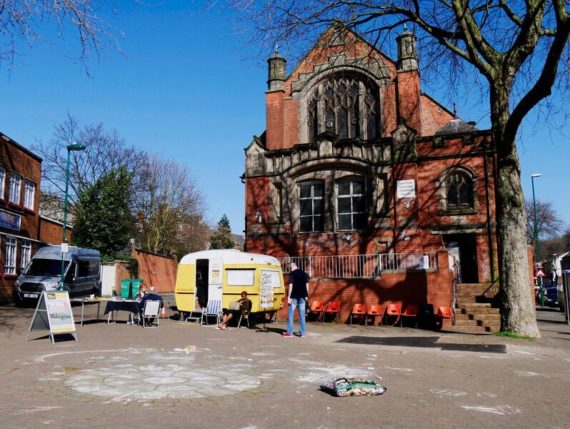 The Real DMZ
‘The Real DMZ: Artistic Encounters Through Korea’s Demilitarized Zone’ has been curated by Sunjung Kim and The Real DMZ Project. The works featured are based on research into the demilitarized zone (DMZ) that separates North and South Korea. The exhibition showcases eight South Korean artists who address the everyday but extraordinary reality of the division of the Korean peninsula, offering a range of perspectives on North Korea itself.
Until 15 April 2018, New Art Exchange, 39-41 Gregory Boulevard, Nottingham NG7 6BE.
www.nae.org.uk/exhibition/the-real-dmz/132

Melanie Jackson: Deeper in the Pyramid
An expansive new body of work, developing across three venues in a partnership between Grand Union (Birmingham), Primary (Nottingham) and Banner Repeater (London). Jackson examines the production of milk and the mythology surrounding it in an immersive installation comprising animation, sculpture, a filmed performance and a graphic novel written in collaboration with Esther Leslie.
12–21 April 2018, Primary, 33 Seely Road, Nottingham NG7 1NU.
www.weareprimary.org/2018/02/melanie-jackson 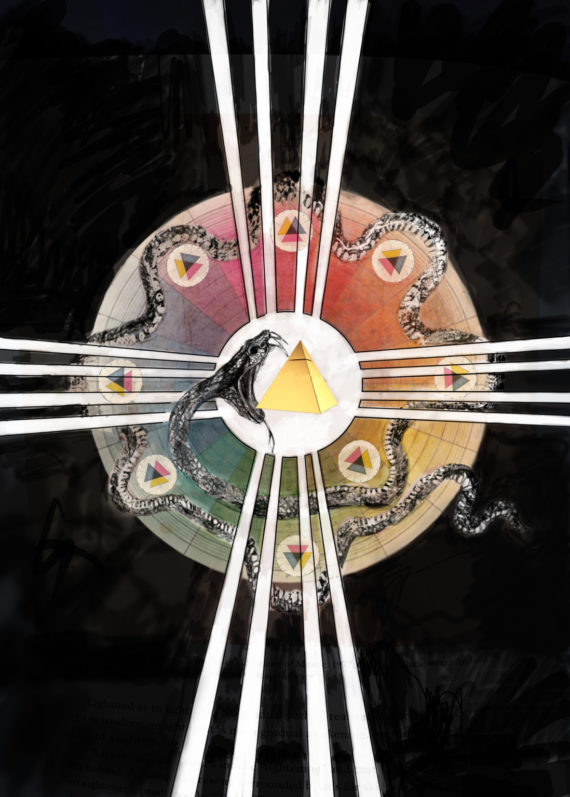