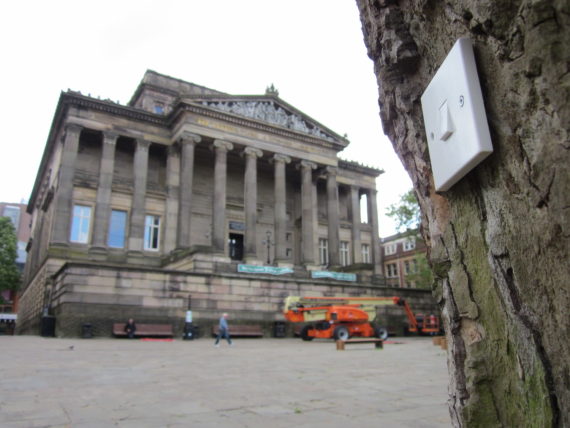 “Tough town”, Preston. That was Henry Rollins’ report when he was lead singer of US punk band Black Flag. The Warehouse – recently voted “nightclub of the year” – was where the alleged altercation happened. Henry didn’t want to talk about it when I asked to interview him for local radio.

Preston’s KFC, motorway junction and football champion firsts – popular pub quiz questions in the past – have been replaced by a new question: “What’s England’s newest city?” Awarded city status in 2002 to commemorate the Queen’s 50-year reign, England’s fiftieth city is now the news. The Guardian recently held a live event to discuss the so-called ‘Preston Model’. The panel was 75% female, 50% cultural and 25% Turner Prize winner.

The Preston Model seems to be a political recognition, at a local scale, that social and economic policies are not singular silos but shared systems, part of a continuous Gestalt. Preston politicians reimagined, with the help of the independent ‘think and do tank’ CLES, an alternative to the submissive system of central government cap in hand-outs. They also stuck two fingers up to TINA (There Is No Alternative), Mrs Thatcher’s stock response to a stimulus of dissent.

Progressive procurement means ‘anchor institutions’ like Preston City Council endeavour to spend more of their budget locally – ‘The public services now spend £74 million more in Preston than they did in 2013,’ claim CLES. 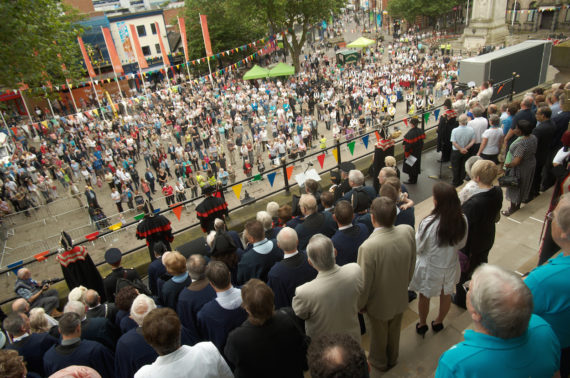 This inward investment seems to be a no-brainer, like British passports being printed in Britain. So the city is working against a global, economically ‘rational’ model that says cheap is good; breaking “the needs of business” mantra and considering citizens when making decisions. Are the cultural decision makers adapting this model too and investing in artists who live and work in the city?

In 2017 Preston’s Cultural Framework Board, the majority of whom are decision makers employed by anchor institutions, hosted an artists’ symposium. They introduced themselves and told us their plan – to be UK City Of Culture in 2025. Will the ‘tough town’, now a teenage city, stand on its own two feet and be Proud Preston again, a twin for Dresden, who are considering applying for the European version in 2025?

Coketown is Charles Dickens’ fictional Preston in his novel Hard Times and also the title of Lubaina Himid’s current exhibition at the Harris Museum, Art Gallery & Library (until 3 June 2018). ‘Hard Times’ is a home fixture for Himid, an artist who lives and works in Preston and the second Turner Prize winner (2017) in a row to exhibit at The Harris. A critical component of ‘Hard Times’ is ‘Into A Better Shape’, a deliberate attempt by Himid and selected artists, some of whom live and work in Preston, “to shine a light on the creative melting pot of talent [in Preston] whilst pushing forward more ambitious contemporary art programming at The Harris”. 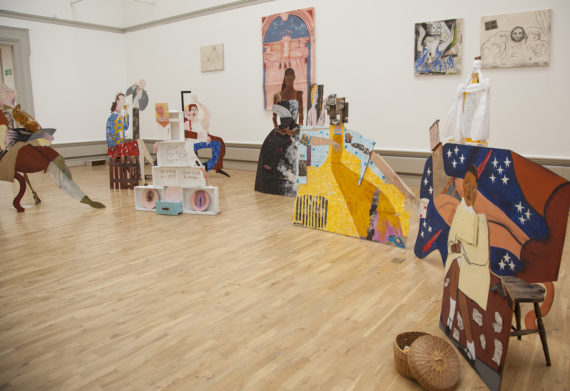 ‘Into A Better Shape’ includes: dinner time discussions; a print symposium, Activating The Archive of Gwyneth Alban Davis (5 May), programmed by Magda Stawarska and Tracy Hill and hosted by Heather Ross; talks about ‘the under representation of women in national and public art collections’ organised by Rebecca Chesney and titled ‘Imbalance Redressed’ (9 May); a selection of films chosen by Tao Lashley-Burnley, ‘Little Little Man Man’ (17 May); and ‘Art Zoo’, devised by Jane Elizabeth Bennett and described as ‘part performance, part installation and part living sculpture’ (26 May).

Also on the Preston Model panel was Ruth Heritage, creative director of They Eat Culture, ‘a direct creative intervention into the cultural life of Preston and Lancashire’. TEC’s latest initiative is The People’s Production Lab. Chris Davies, who runs an organisation called Alison, gave me a guided tour of TEC’s new four-storey home, an ex-school in an old office block. TEC used to operate out of a pub called The Conti (nental) – a live music venue and pleasant place for a pint on a sunny day. Davies explained the building is owned by local building company Conlon Construction, who recently completed work on the new glazed-in, covered market. Is this the Preston Model in action?

If a scene is a subdivision of a play In Certain Places may be stage directors, cajoling audience and artists from behind the scenes. Led by Charles Quick, professor of public art practice at the University of Central Lancashire (UCLan), In Certain Places is an ongoing interdisciplinary artistic research project. As an organisation they like to let artists get on with it. Their current programme is called ‘The Connected City’ and focuses on ‘places involved in the City Deal – a £430m, 10-year infrastructure scheme’. Artists involved include Olivia Keith, Gavin Renshaw, Emily Speed, Ian Nesbitt and Ruth Levene. Lauren Velvick has been commissioned to write about it. 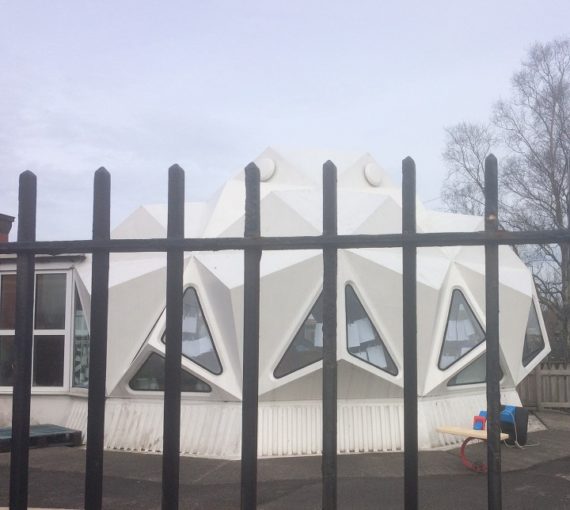 Their last event, ‘What do we need in a space for play?’, was held in the only icosahedron-shaped classroom in the country (another quiz question). Emily Speed was in conversation with architect Lee Ivett, an associate artist with TEC and an alumnus of Kennington Primary School. He was taught in the now Grade Two-listed ‘bubble’ classroom. Is it possible the environment had an effect on the pupil and inspired him to become an architect?

Derelict are based at The Media Factory, part of UCLan. They produce theatre, live art and an annual performance festival in the city. Talking to the director Chris Gilligan, he mentioned that their next project will be working with PCC on the 2018 edition of Lancashire Encounter. A ‘biennial’ born of the goodwill and energy of Preston citizens who, once every 20 years, celebrate the guild – “the only one still going strong in the UK!”

Also at UCLan is an arts venue with white walls called Hanover Project, based in the foyer of the Hanover Building – where the university teaches fine art. The space is run by a steering group comprising fine art lecturers and coordinated by artist and lecturer David Mackintosh. For recent exhibition ‘Messy Democracy’ (9-27 April), UCLan students were given creative control of the gallery to stage their own work. 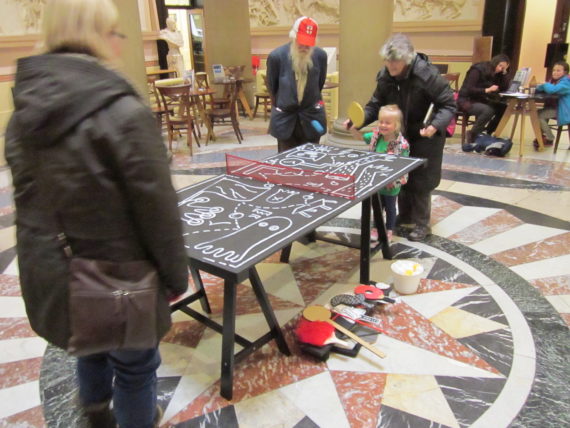 The Birley is an artist-led studios and project space in a pre-loved council office. It was established in 2013 by four UCLan graduates resilient enough to resist the temptation to migrate to a different city, choosing instead to contribute towards a home-grown creative ecology. Talking to two of the directors, Benedict Rutherford and Steph Fletcher, about what makes a scene, Fletcher suggested she’d like another artist-led studios, somewhere to go to; to be a guest, rather than a host. The Birley building is half full and half empty – the empty upstairs is an opportunity. The current artist-in-residence is Faye Spencer.

There are independent cafes, of course; Ham and Jam hosts live events (Spark open-mic true story telling). There are proper pubs too (The Black Horse and The Blue Bell), a car boot flea market every Tuesday and Thursday and a charity shop called Rwanda. I walk to my studio every day along a wooded path, across a river and through a Victorian park. Every city has its pros and cons but I’ll defer to The Guardian for the last words and wonder why more artists aren’t moving to Preston – “best city to live and work in north-west England”. 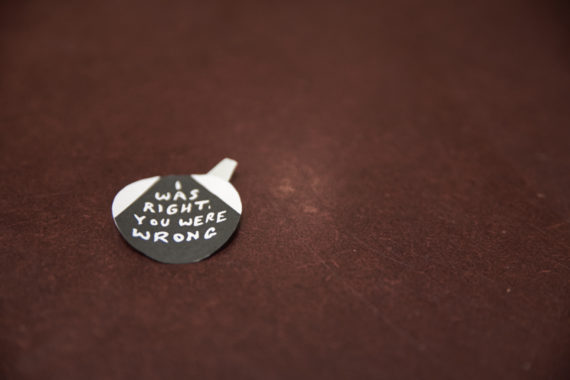 Martin Hamblen is an artist who lives and works in Preston. He is one of eight a-n members selected for the a-n Writer Development Programme 2017-18. For more information on the writer programme, and to read more of the latest cohort’s work, visit the 2017-18 programme’s blog on a-n.co.uk or use the a-n writer development programme 2017-18 tag