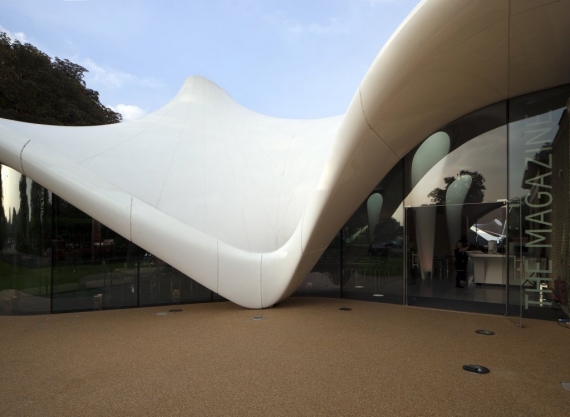 “It is very much a historic moment for us. We’ve had our eye on this site for many years.” Lord Palumbo, Chairman of the Trustees of the Serpentine Gallery, is talking about The Magazine, a former gunpowder store in Kensington Gardens, across the river on the north side of the Serpentine Bridge, which is now home to the new Serpentine Sackler Gallery.

Despite the board’s longterm interest in the site, the new gallery nearly didn’t happen – somehow, says Lord Palumbo, when the building did become available “we missed the advert in the Evening Standard.”

However, with the award-winning Zaha Hadid Architects on board, the Serpentine were able to insert themselves fairly late on into the competitive tender process that the Royal Parks had launched – although it was no longer possible to view the building. “Zaha talked to the agents who acted on behalf of the Royal Parks and they gave her sufficient information from memory to allow her to put the proposal together,” explains Lord Palumbo. The gallery won the tender in 2010.

Hadid’s extension to The Magazine has been made possible thanks to the single largest donation that the Serpentine Gallery has ever received. The new gallery is named after its benefactors, Dr Mortimer and Dame Theresa Sackler; the Serpentine has a 20-year lease on the building with the possibility to apply for five-year renewals.

“Nothing could be more innocent,” jokes Palumbo of the modest neo-classical munitions store, built in 1805 at the height of the Napoleonic Wars. The 3,414m2 site contains two galleries within a larger gallery space, the offices of the curatorial team, a shop, a soon to be landscaped garden and The Magazine restaurant in the newly built extension. The voluminous curves of this tensile structure create a light and airy social space.

“We now have a campus, if you like,” says Serpentine Gallery Director Julia Peyton-Jones, who describes the process of realising the new space as “a race against time in every conceivable way, and therefore like a thriller – except that we were living it.”

The curatorial narrative behind the launch of the new gallery brings together ideas of time, legacy, transformation and destruction. The thoughtful curation across both the Serpentine and Serpentine Sackler Gallery creates a conversation between artworks, the spaces and the historical context of the Royal Parks.

The arte povera of 82-year-old Marisa Merz, recently awarded the Golden Lion for Lifetime Achievement at the 55th Venice Biennale, is displayed in the original Serpentine Gallery. Within this new relational context, her copper wire and aluminum sculptures, as well as paralleling Hadid’s architectural forms, begin to conjure up suggestions of chainmail and ancient suits of armour.

Another link between the two spaces is a new annual commission to mark the seven-minute journey between the old and the new. For the first of these Bridge Commissions, every month up until August 2014, an audio recording of a new literary work will be produced.

The first of these is by Valeria Luiselli, whose narrative walks the audience between new, old and non-existent galleries, accompanied by the voice of a child. Listeners are asked to consider a time beyond galleries – a fitting introduction to the narratives of Adrián Villar Rojas’ work, Today We Reboot The Planet, the inaugural exhibition at the Serpentine Sackler.

The Argentinian artist has created a sacred and intimate space within the new galleries. Responding to Hadid’s architecture and the history of the munitions store, he has created a truly site-specific work of gigantic proportions, that will disintegrate once it is de-installed after the exhibition ends on 10 November.

The installation draws on theories of the Anthropocene – a new geological era marking the impact of humans on the Earth. In his now signature clay, Villar Rojas has created an archival tomb to our culture. It’s like entering a museum of antiquity, and the first encounter is a large-scale clay elephant, weighed under by the architecture of the building that bears down on its spine. Amongst the many other exhibits in the exhibition is a crumbling, fossilised Kurt Cobain.

The two barrel-vaulted, bare-brick powder rooms of the building – newly named after Bloomberg and the LUMA Foundation – have been designated by Villar Rojas as the Archive Room and Chapel Room respectively. These are where the sanctity of the encounter really occurs.

Like fossilised architectural ruins, the Archive Room features rows of shelving containing clay relics that hark back to architecture, art history and contemporary life. Residues of soap appear on boards, plants grow out of plaster busts, and plastic bottles are encased in cement, whilst plastic bags become disturbing blindfolds. It is like visiting an abandoned mortuary, and the brickwork and subdued lighting of the Chapel Room create a hushed funereal atmosphere.

Villar Rojas and his team have become a second, more elusive and transitory architectural firm, encasing much of the gallery space in already cracked clay and cement. The entire floor of the galleries are constructed of loose red bricks that clink when walked on, making the building an integral part of this haptic work.

Impressive though Zaha Hadid’s experimental forms and groundbreaking engineering are, the Serpentine Sackler building has met too many compromises within the setting of the Royal Parks for it to be anything more than a pleasant encounter. It is far outshone by the artwork that inhabits it.

The Serpentine Sackler Gallery opens to the public on 28 September. www.serpentinegallery.org