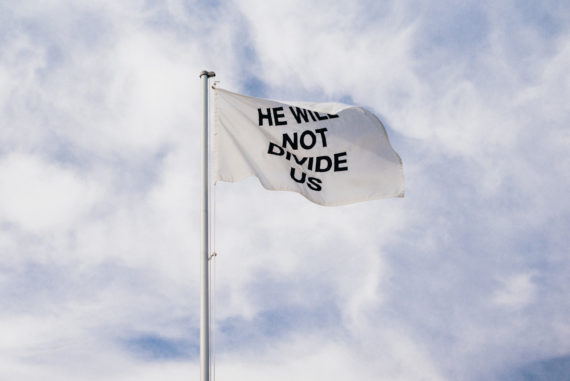 After being in place for just one day, last week artist group LaBeouf, Rönkkö & Turner‘s artwork HeWillNotDivide.Us was removed from its fourth home at FACT, Liverpool, following dangerous attempts to deface it. The work, which was discontinued on police advice, featured a flag flying above the gallery emblazoned with the text ‘He will not divide us’, and a livestream broadcast on www.hewillnotdivide.us (deactivated following defacement).

A direct statement of resistance to Donald Trump’s power, the fate of the work hints at the struggle facing left-wing political artists both sides of the Atlantic.

The artwork was hounded out of the USA by violence and vandalism; the troll made material. Originally installed at New York’s Museum of the Moving Image on inauguration day, the artwork invited passers-by to recite the slogan “He will not divide us” into a wall-mounted camera.

The livestream documented, alongside protestors, the incursion of far-right activists and agitators. The volatility of the work was evident; LaBeouf’s reaction to fascist hate-speech saw him arrested. Citing ‘serious public safety hazards’, the museum removed the work without the knowledge of the artists.

During its second iteration in Albuquerque, New Mexico, shots were heard on the livestream. While the correlation between the work and the incident has not been corroborated, the work was moved again. This time at a secret location, the camera was replaced with a flag. Nearby fields were set on fire. The artwork was moved to Liverpool, seeking the safety still denied it, where it opened on 22 March.

By making the public the active element in the realisation of its critique, HeWillNotDivide.Us (in its initial form) demonstrated that the political potential of art can be realised by using it as a site of intervention.

As with many of the artists’ previous works – from call centres (#TouchMySoul) to conversations in lifts (#Elevate) – HeWillNotDivide.Us is enacted only when it is engaged with. By soliciting active expressions of dissent, the work resonates in the UK context, especially in its adoptive city which voted 58.2% to remain in the EU.

The livestream documented this playing out of parallel political tensions in the USA and UK. Many of the artists’ works have occupied this hybrid digital and physical realm (for example, #AllMyMovies). This awareness of the inseparability of on- and off-line chimes with a populous grappling with a democratic upheaval largely shaped in the furnaces of Facebook and Twitter.

This makes the work not only actively political, but decisively contemporary in both form and fate. While much of the right-wing upsurge in Western democracies is borne of nationalist, inward-looking rhetoric – ‘Make America Great Again’, ‘Take Back Control’, the Front National – the Internet provides a space for these cognate national narratives (and tactics) to be incubated and shared globally.

Left-wing political artists in the US, UK and elsewhere are consequently encountering similar types and expressions of opposition; indeed, 4chan and 8chan have been particularly instrumental in organising internationally against HeWillNotDivide.Us.

FACT’s current exhibition, ‘How Much of This is Fiction’, is a highly politicised meditation on the contemporary global political order. It features works addressing the use of torture at Guantanamo Bay, the military use of drones, and ‘post-truth’. Having already featured LaBeouf, Rönkkö & Turner’s #TouchMySoul during the 2015-16 exhibition ‘Follow’, the gallery seemed to provide a perfect refuge for the work.

However, with its removal showing the dark side of global connectivity, its message emphasises that these communication channels can also facilitate unity and solidarity. By exposing the fallacy of borders and divisive narratives of national identity in the Internet age, it asks us instead to unite under a flag that embraces compassion, not division. It places art at the crux of this struggle.