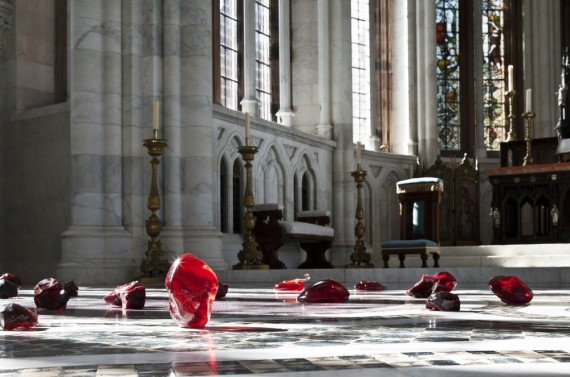 When the artist Lucy Skaer was invited to work at Mount Stuart, an extraordinary neo-gothic house on the Isle of Bute built in 1880 by the 3rd Marquess of Bute after the family’s Georgian home burned down, she took the matter of rummaging around in the building’s history quite literally.

Fascinated by the obsessive nature of the Marquess’s project and the building’s famously excessive architecture and interiors, she wondered whether it might be possible to replicate some of its complex marble detailing. Better than that, however, she discovered some of the unused original building materials in a bramble patch on the estate. “I’m really interested in the parts of the building that are not finished,” she says. “It feels like a thicket, there’s always the possibility that more might sprout from it.”

Visitors to the dining room, with its important portraits and French chandeliers, are now confronted with some of the original polished marble columns once intended for the building’s exterior. Skaer has piled them anachronistically and somewhat ominously beneath a dining table fully set with silverware. “I wanted them to be a manifestation of the obsession of the Marquess,” she explains. “I wanted them to be under the table like a physical presence, an awkwardness.”

Similarly, Skaer has introduced modern editions of historic Audubon bird prints that are now incongruously laid on the floor in the drawing room and a bedroom. The family’s own volumes of Audubon’s Birds of America were sold years ago.

Skaer’s commission, A Proposal for Mount Stuart 2013, is a series of poetic and precise interventions in eight rooms across the house, from the Horoscope Bedroom to the library, and is part of the now annual contemporary art programme directed by Sophie Crichton Stuart, sister of the current Marquess.

“I feel like I was invited because I was hanging about there so much!” Skaer jokes. A regular visitor to the art programme at Mount Stuart, her film with the late dancer and choreographer Gill Clarke, A Dance of Ownership, A Song in Hand, was shown in a group exhibition at the house in 2012. A double exposure, the film was shot first in St Kilda, the remote island the 5th Marquess gifted to the National Trust in 1957, and then rewound and reshot in the house.

Skaer, who trained at Glasgow School of Art and was nominated for the Turner Prize in 2009, returned to the UK this summer after spending five years in New York, where Crichton Stuart spends much of her time. “Lucy’s return to Glasgow from New York seemed the perfect time to collaborate on a solo project,” says Crichton Stuart. “Because we have been in discussion over the years the project moved forward organically and with ease.”

The artist follows in the footsteps of Langlands and Bell, who took on the historic Burges Chapel by introducing a disorientating mirrored floor, and Anya Gallaccio, who gilded a living pine tree in the grounds with silver foil. In 2006, Nathan Coley’s large illuminated sign, There Will Be No Miracles Here, obliquely addressed the house’s spiritual history.

Skaer describes her own work as “a maker’s response”. All her works are untitled and deliberately avoid reference to narrative histories of the building. “I think I approached it in a really sculptural way,” she says. “The tensions, and possibilities of the house and the neo-gothic architecture, were exciting because you could make the most lavish gestures that you couldn’t get away with in a white cube gallery. I was clear that I didn’t want to take it on in a combative way, it’s almost like ornamentation for the house.”

This approach is most evident in the Marble Chapel where great blobs of crimson glass are lying on the floor, as if the stained glass in its red-tinted roof lantern was melting and dripping onto the ornate marble floor below. They include fragments of crude-looking cullet (glass fragments broken off in the kiln) and blown forms like little globes and symmetrical spun plates. “I’m really interested in how you could as an artist just respond very directly to something that has been made, but not going by the route of language or study or factual history,” says Skaer.

There is a suggestion in this work, common to domestic narratives in gothic literature, that the house may have a life of its own. But aside from their evident formal beauty, these glass pieces also appear to court an ambivalent approach to time and history that is a longstanding interest in Skaer’s practice. “It’s often that my move as an artist is to take away distance,” she says. “Or I try to mess around with the boundaries of something becoming historical.”

Reaching a balance and focus

For Crichton Stuart, the challenges of working in her childhood home, one of the most important and idiosyncratic Victorian houses in the country, are many but surmountable. “The question of reaching a balance and focus is both in the conception and in the placing of the works. The works cannot compete with the context, so there is a journey of negotiation with the context which each artist travels. We aim to support the artist as best we can throughout the process. There are of course practical challenges working in an historic environment. We have certainly pushed the envelope over the years, but always need to be aware of our core remit of preserving and conserving the historic collection.”

The question of history presents itself in Skaer’s show as a tension between past and present, between language and form and between living and inert materials. On a fine antique table in the drawing room she has placed 12 plaques carved from a windfall yew that was collected from the grounds. Each is shaped in an emerald cut, so-called because it’s the form best suited to mitigate the structural weaknesses of that gemstone. It’s a convention in sculpture to talk about uncovering a form “hidden” in a material, but Skaer’s approach, with its schematic discipline, is an off-kilter displacement of such an idea.

“It’s such an overly symbolic wood, so I did look at it as material that is already loaded,” she says. “The wood is very raw, and smells of sap and wet, but is bounded by this table that is highly crafted, and is not at all a living thing.”

Yew, of course brings with it a melancholy association with graveyards. “It’s already a morbid material,” confirms the artist. In Skaer’s hands, the historic house seems either haunted or precariously balanced between life and death.

Lucy Skaer will be talking about her Mount Stuart commission on Thursday 19 September at Common Guild, Glasgow, 6.30pm. Places are free but limited. To book, email [email protected]