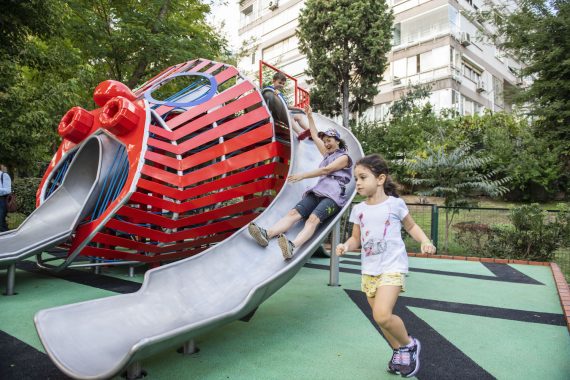 At the launch of the 16th Istanbul Biennial, titled ‘The Seventh Continent’, its curator Nicolas Bourriaud (of Relational Aesthetics fame) introduced the programme with a blast of opera and a still from Werner Herzog’s 1982 film Fitzcarraldo. Bourriaud described the tone of his programme via the film – “the forest is one of the actors”. In the movie, Klaus Kinski plays an Irish ‘railway man’ who wants to build an opera house in the Peruvian jungle. It is set during a time of tremendous deforestation in the area, when millions of rubber trees were chopped down.

Today, the seventh continent of the biennial’s title refers to the infamous mound of plastic waste in the ocean, which has formed a mass one third the size of the United States of America. An accumulation of all our plastic waste – our collective irresponsibility, manifest as a new land mass. Bourriaud asked us to imagine a better way of looking at the problems we are facing and how this new continent might look if artists, thinkers or anthropologists were its first inhabitants.

So it was clear. We were here to think about the anthropocene, climate emergency, science fiction, and the end of the world or the beginning of a new one.

I wonder if the Fitzcarraldo analogy also pointed to something else. A section of the film is taken up with dragging a large ship over a mountain, a seemingly impossible feat that caused anguish both in the story and on set. A few weeks before the opening of the festival one of the three main venues, the Haliç shipyards, was found to have asbestos and the decision was made to find a new location for 38 artists’ work. This would likely have seemed an impossible feat – but the biennial team did manage to find a new venue. 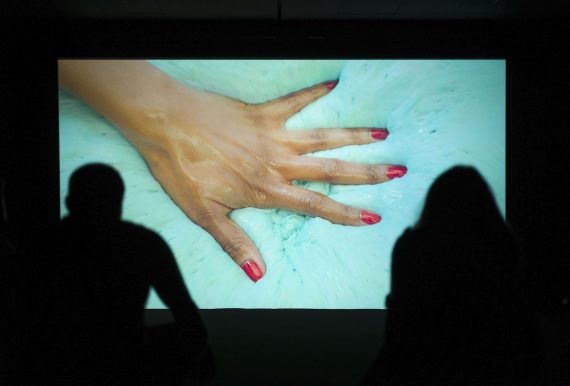 The Istanbul Painting and Sculpture Museum’s new home will open to the public in 2020. For now, it is the last minute venue for much of the Istanbul Biennial. It is astounding that a suitable space was found in such a short period. Those few weeks must have been difficult and I’m impressed the transition was so smooth. However, it isn’t quite right – a lack of natural light, poor signage and works that would have directly referred to the impressive location of the shipyards and their histories felt limp in this awkward space.

Rashid Johnson’s The Hikers is a beautifully filmed ode to the comfort of finding another person who shares aspects of your identity in isolated or fraught spaces. This work was a highlight not just for me, but also for many others I spoke to, but I did feel uncomfortable about the predominantly white gaze on a work so clearly speaking of a black experience.

Korakrit Arunanondchai showed work in two rooms – a video that depicted the rise of Donald Trump and the death of the king of Thailand alongside footage of his grandmother who has early dementia and is losing grip on the world around her. In another space paintings and pressed flowers from around the local area fill the room. 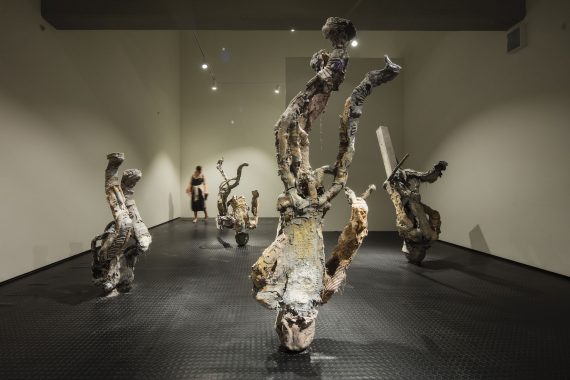 Johannes Büttner’s The possibility of another life expresses itself directly in a cop car on fire and obliquely in the faces of my friends (taken from writing by Hannah Black) is an installation of seven sculptures buzzing, vibrating and falling to pieces – it is a powerful work, a little bit scary and really brilliant.

The second venue I visited is Büyükada, a so-called ‘Princes’ Island’ off Istanbul and over an hour away by ferry. It is clever to host part of the programme here – the landscape is totally different, steep hills, radiant purple flowers, glimpses of the twinkling ocean, crumbling buildings and sea-front cafes. How anyone with accessibility needs would navigate seeing the biennial on this island is another question.

There are six artists showing work on the island, which gives an opportunity to present more complex projects. Armin Linke’s film Prospecting Ocean is placed in an old clubhouse within terraced grounds overlooking the sea. The work is shown alongside shorter videos, publications, maps and drawings, all exploring or describing oceanic ecology and the extraction of ocean resources. It’s a big work, giving access to conversations and situations we would not normally have the privilege of seeing or hearing.

Upstairs in the same house, a more accessible work sits in contrast to the period interior of the building. Ursula Mayer’s The Fire of Knowledge is Burning All Karma to Ashes is a HD video loop of a digital avatar of the trans model Valentijn de Hingh floating in space like a character in a computer game awaiting instruction.

Elsewhere, the art is more playful, making the most of the gorgeous context of this island. Monster Chetwynd has made two works for the biennial; one is a permanent playground in the form of a gorgon’s head in a public park full of cats, a follow on from her soft play space in Barking which opened in 2015. But it is this work in Büyükada that I find most successful. Four hybrid creatures welcome you outside an old wooden house. It is strange, joyful and really funny. 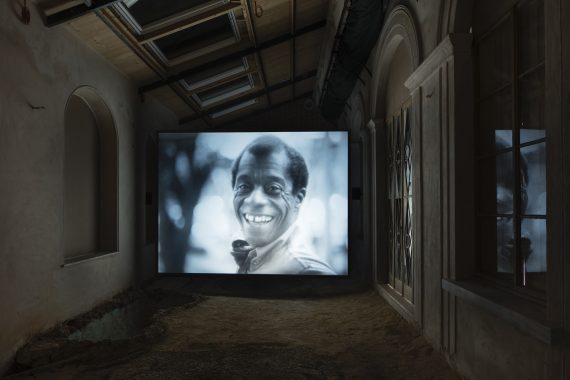 Close by, another building hosts an installation by Glenn Ligon. I am a fan of his, but I found this a little dull, the latest in a series of sculptures from his ‘America’ series plus two films in a space at the back. The most interesting element of the installation (and a distinct high point of the whole biennial) was the screening of the poetic film From Another Place (1970) by Sedat Pakay, tracing James Baldwin’s daily life in Istanbul where he lived on and off in the late 1960s. I had never seen it before and I want to see it again and again.

Potatoes ‘crop up’ throughout the biennial, so it was fitting that we had them for lunch on the island – part of Wapke Feenstra’s project, which involved working with potato farmers in Turkey. It felt almost comical to be eating baked potatoes in this context, but it was a nice pause and a chance to meet new people.

The final venue is the Pera Museum back on the mainland, which holds a more condensed selection of 14 artists. This included one of my favourite works in the biennial, a series of illustrations by Ernst Haeckel depicting animals, sea creatures and microorganisms. These could have been contemporary drawings of imagined creatures, an ode to science fiction. But they were actually 19th century depictions of real living things, many of which are now extinct. In a biennial with work by so many disparate artists, the inclusion of these illustrations brought me back to the ideas of the show more than any other piece. 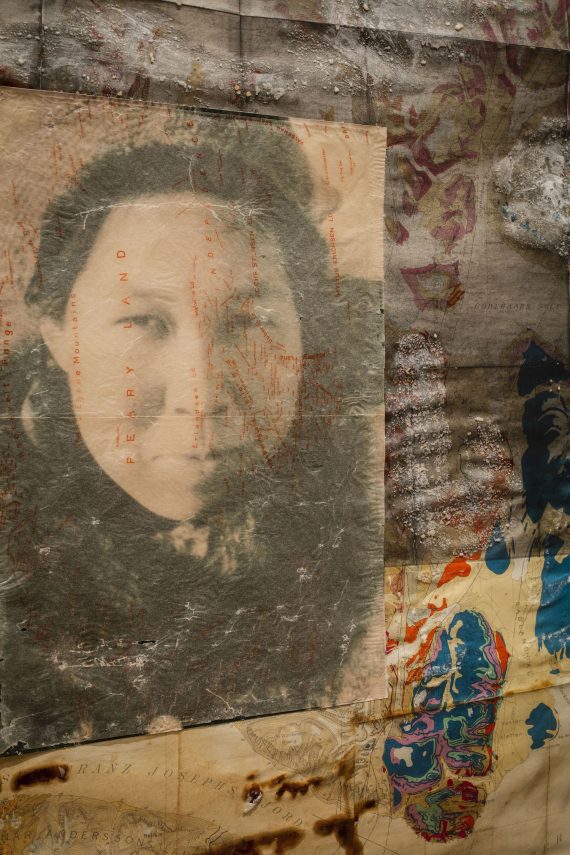 There is a lot that is good about the 16th Istanbul Biennial. But the problem with large-scale exhibitions is trying to condense one idea or a series of questions into the work of so many artists and their complex concepts. It is difficult to avoid cliché in an artworld where it can seem like everyone is saying the same thing, to each other, on a loop while the rest of the world gets on with their daily lives.

The slightly cheesy use of emojis in the graphic design and much of the language reminded me of words I read in so many statements, on press releases and on social media right now: ‘post-human’, ‘non-human’, ‘now more than ever’, ‘anthropocence’ and of course, ‘urgent’. I’m glad we’re talking about them, but often wonder where the actions behind the statements are.

A new world inhabited primarily by artists is not one I’d like to live in. However, I’d quite happily stay in the magic city of Istanbul with its cats, lovely people, delicious food, buzzy atmosphere, crazy-beautiful architecture and its thoughtful and well-executed biennial. Before The Seventh Continent swallows us all. 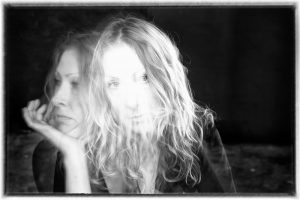 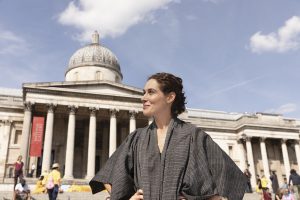