The ethics and effects of funding artists: a response to the Ellie Harrison affair - a-n The Artists Information Company 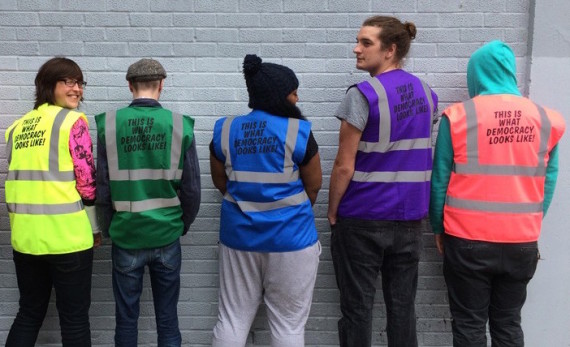 When Glasgow-based artist Ellie Harrison launched her year-long project The Glasgow Effect, funded through a £15,000 grant from Creative Scotland, she could not have anticipated the scale of the impending furore.

Best known for her socially-engaged art and activism work (Bring Back British Rail, This Is What Democracy Looks Like!), within hours of posting details on Facebook, a torrent of abuse had erupted on social media and the story was soon plastered across the national press. Few visual arts projects garner this much attention – so what is all the fuss about?

Essentially, the funding is for research and development. But, by way of a self-imposed restriction to remain in the Greater Glasgow area during 2016, the project can also be considered an artwork; Harrison describes it as “action research’’ or a “durational performance”.

What it is not, as it has largely been portrayed, is a grant to simply stay in Glasgow for a year; that is just one parameter of the work. The proposed activities include project development and events, network building, mapping and participating in the city’s visual arts ecology and developing new audiences; all activities typical of R&D.

As well as aiming to cut the artist’s carbon footprint by resisting the international demands of a successful art practice, Harrison wants to increase her sense of belonging in Glasgow. Although she has lived in the city for seven years, she has frequently travelled for work, both as an artist and lecturer at Duncan of Jordanstone School of Art and Design in Dundee. The decision to remain, she says, is an attempt to channel all of her “ideas, time and energy into the region”, as well as being a response to climate change.

All this was largely lost in the reactionary social media response. But leaving aside the tirade of misogyny, the personal attacks, ungrounded accusations and absence of nuance or fact, the criticism should not simply be dismissed as a lot of hoo-ha over what amounts to ‘a substantive artistic development bursary’. That would be to mask what it is actually revealing: the systemic causes of inequality.

The artist’s choice of title and marketing image are what initially sparked the controversy. ‘The Glasgow Effect’ refers to the poor health and low life expectancy in areas of the city, and this already emotive term was coupled with an image of chips. The combination of the two, and the surface analysis of the project that has ensued – in the context of a city where many people do not have the luxury of choosing to leave – has left the artist open to charges of ‘poverty tourism’.

However, more nuanced interpretations are possible; the artist might have envisioned a broadening of the appropriated phrase through the development of the project, while the imagery could be read as an attempt to break down cultural distinctions between ‘high’ and ‘low’ culture. But if Harrison had chosen a different image and kept the project’s working title, Think Global, Act Local!, it may not be causing this level of public outrage.

From this outset the predictable criticisms of public funding for art flowed forth: ‘Why should art be funded at all in times of austerity? Why should an artist be paid more than someone on minimum wage?’ While these may be tiresome and hackneyed arguments for those within the sector, they raise legitimate issues that deserve consideration and response.

What this controversy is really about is class and our inability to see and/or unwillingness to address the causes of inequality. The majority of the criticisms are grounded in an acceptance of the austerity agenda; a convincing narrative about the ‘need’ to ‘balance the books’ and ‘tighten our belts’ (as if the national economy were comparable to a household’s budget).

This myth masks the fact that funding allocations are actually political choices. And false choices, such as the classic example of funding for hospitals or funding for art, detract from looking at the actual causes of injustice and oppression. It is much easier to attack an artist and a funding body than it is to tackle the system that produces the disparities in the first place.

What the criticisms of the project further expose is the inequality and lack of diversity inherent in the arts, as confirmed by the findings of the recent Panic! survey into social mobility. If the public do not care about, engage with or sympathise with the arts it’s because the majority of people remain excluded both from its production and consumption.

The sector needs to be diversified if this is to change and that requires active behavioural change from individuals and organisations across the ecology. For far too long the arts have been a closed shop, open only to those in already privileged positions or those determined enough to undergo hardship, precarity and financial risk.

That said, it’s worth noting that the majority of artists (around 42,000 across the UK) earn less than £10k a year from their practices. In Scotland, 67% claim working tax credit and a 2013 survey found that three out of four artists survived on less income than £5000 annually. It may also come as a surprise to those outside the sector that a Paying Artists campaign survey also from 2013 found that 71% of artists didn’t receive a fee for exhibiting in publicly-funded galleries.

Ellie Harrison is “concerned with analysing and exposing the motivations, processes and ethics of making art” – something The Glasgow Effect is certainly addressing. Without public funding and proper remuneration, most artists struggle to maintain an acceptable standard of living, let alone realise significant projects. That puts them at a disadvantage to those in financially stable circumstances. And the more this funding is attacked, the more being an artist will become the preserve of the few as the many are increasingly excluded.