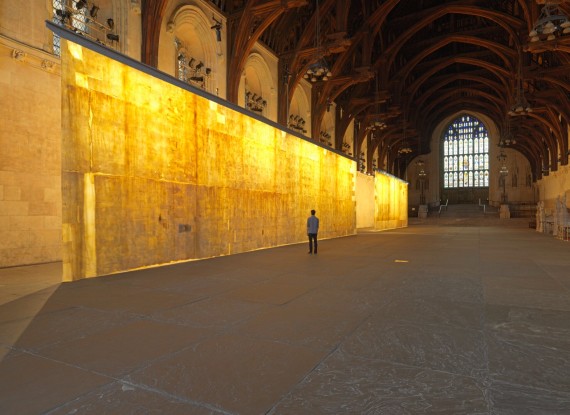 This week marks the opening of a major temporary site specific artwork in Westminster Hall, the oldest part of the Houses of Parliament and home of the UK’s House of Commons and House of Lords.

Spanish born artist, architect and conservationist Jorge Otero-Pailos’ new work, The Ethics of Dust, is a 50 metre long translucent latex cast of the hall’s interior east wall. Suspended from the roof, and measuring 28 metres high, the work contains hundreds of years worth of dust and surface pollution, transferred when the latex was removed.

“It is literally a cast of the wall”, says Otero-Pailos. “The latex was applied to the surface and left for about three days before being peeled off, a little bit like a skin. So what you are seeing is the transfer of the dust, placed four metres away from the wall.” 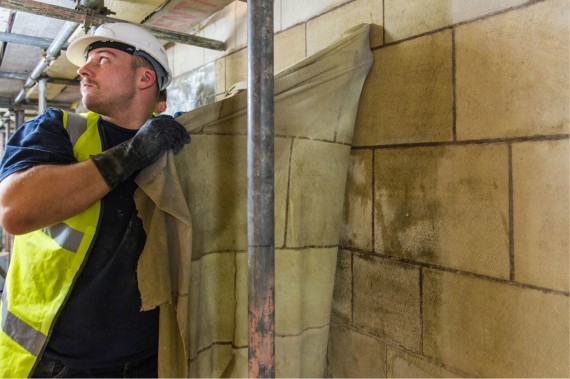 The location and timing of the exhibition’s opening, coming just days after the EU Referendum result, has not gone unnoticed.

Otero-Pailos comments: “It is one of those Hegelian moments where we are witnessing history. Obviously I did not create the work as a comment on the referendum – it’s been a long process lasting several years – but anything that happens here is linked to the present and past history of the building. Works such as this pick up meaning along the way but let’s just say there was no master narrative involved.”

In order to get the green light for his installation, Otero-Pailos collaborated closely with Parliamentary Estates. “I had an incredible amount of support from the House of Commons and House of Lords who understood the importance of what we were doing. I have to say, one thing that never came up was the fact that I’m a foreign artist. I’m not sure there are many other countries where this would happen.” 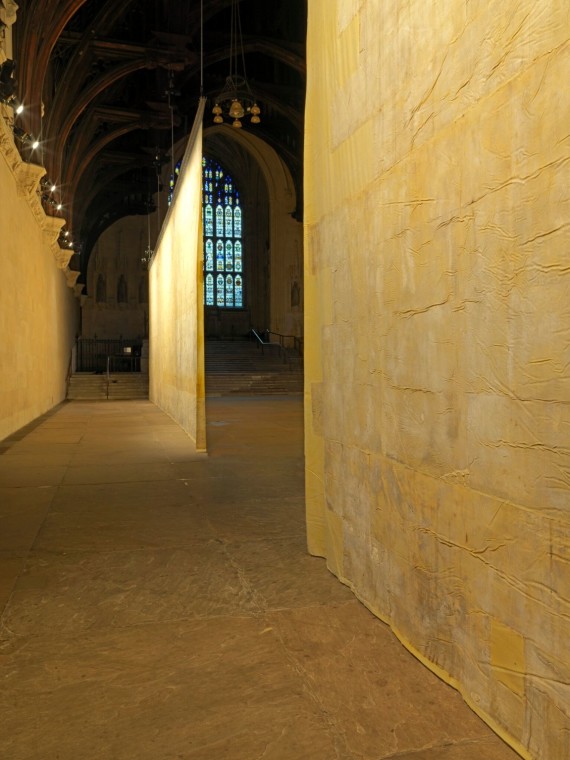 The work takes its name from Victorian writer and social thinker John Ruskin’s 1866 publication The Ethics of Dust, widely regarded as the foundation of modern, architectural conservation.

“I was interested in why Ruskin was opposed to cleaning. He recognised that 19th century architects were doing more damage than good with the blunt instruments they had at the time. The way that they would clean would be to essentially chip off parts of the wall, re-rendering it.”

Conservation technology has now advanced to the point where cleaning can be carried out safely without damaging the stone work of historic buildings, as Ruskin would have had it. Otero-Pailos believes this has also presented the opportunity to rejuvenate spaces whilst also capturing their histories.

“Ruskin looked at stone as a natural process, going from dust, crystallising into stone and then eventually returning to dust again. For him, when you saw dust on stone you were able to really see geologic time passing. So in the case of Westminster Hall, basically what you are looking at hundreds of years of environmental pollution, preserved in latex.” 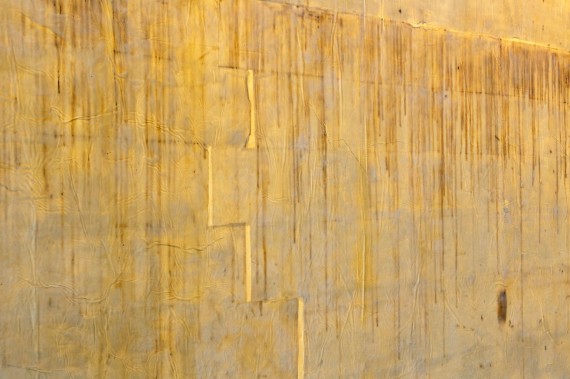 The installation offers a unique way of experiencing the history of the space, from the Second World War blitz and the Great Smog of 1952 to the trials of Guy Fawkes in 1606 and King Charles I in 1649. “The dust, soot and dirt has been generated by key historical events. For the most part this stuff just gets cleaned and washed into rivers. I am asking us to consider where it should go and finally settle.”

A tactile work such as this invites viewers to want to touch it. Does Otero-Pailos want the audience to have a purely hands off experience? “Not at all. I would love for the audience to be able to interact more with it but it is one of the conventions of security in exhibitions that they can’t. Also, it would’t last very long as it is so fragile.

“When I created a cast of the 14th century Doge’s Palace at 53rd Venice Biennale my piece was by the end of the show, shall we say, ‘worn’. Both works are a product of their environment, but are also dependent on their environment. It’s a bit like paper – in stable conditions the piece will last indefinitely but if it’s put out in the sun it won’t last very long!”

Once the exhibition has finished Otero-Pailos’ work will be split into sections with a view to being sent to various venues across the UK. “Ideally I would like the work to remain here in this space, but that’s a little unrealistic. But who knows. A building such as this is constantly being repaired, retouched and restored. In a sense this is just another step along the way of preserving Westminster’s history.”

The Ethics of Dust continues at Westminster Hall, Houses of Parliament, London until 1 September 2016. www.artangel.org.uk