Theaster Gates in Bristol: "A collaboration with a city" - a-n The Artists Information Company 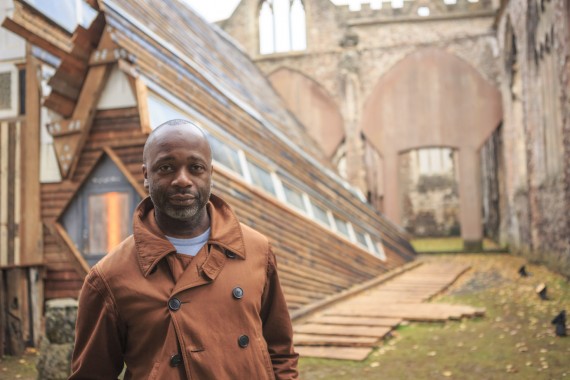 Raised in just 10 days, the physical structure of Theaster Gates’ Sanctum is an astonishing piece of architecture, rearing like a biblical apparition: an ark surfacing or a ramshackle shelter amid receding floods.

With building materials drawn from the detritus of the city, Sanctum features doors of Georgian houses, bricks from a recently-demolished Salvation Army citadel and timber from a nearby swing bridge currently under repair.

The Chicago-based artist describes his first major public art project in the UK, commissioned by Bristol public art producers Situations, as an act of “collaboration with a city.”

Indeed it’s the shared creation of an army of almost 1000 performers, alongside numerous architects, carpenters, builders, programmers, producers, assistants, security and volunteers. While the hand of the artist is barely present (never mind his training as a potter), Gates is completely at home in his role as instigator – for him Sanctum is “about the power of collectivities, of collective publics.”

On opening night, the artist stands quietly before an expectant crowd before leading them into the inner chamber. His words are measured and brief; he takes up little space before moving aside and making space for the voices of others.

The wailing and rousing war cry of bagpipes from a local pipe and drum band makes for an odd but rallying beginning to an artwork that will last a marathon 552 hours. Every hour of the day and night, visitors will witness a diverse programme of musicians, singers, poets, performers and even potters, drawn from every corner and community of Bristol.

The site of Sanctum is an iconic but disused church, bombed-out in the second world war but whose origins stretch back at least to the 12th century and the Knights Templar. Where his Artes Mundi prize-winning installation, A Complicated Relationship Between Heaven and Earth, or, When We Believe, presented an assembly of objects and rituals associated with religious transcendence, Sanctum looks more broadly at what it means to gather, to worship, to pay heed.

The spiritual significance of Sanctum‘s location is never downplayed, with Gates describing his fascination with “how a place accumulates histories”, but he has no interest in preserving a static image of the past. His recent restoration and transformation of The Stony Island Arts Bank in Chicago, brought together community activists, developers and residents to reimagine what a bank could be: what stories it could keep safe and what conversations it could foster.

On the first night of Sanctum, artist Sara Zaltash performed at midnight, singing the Islamic call to prayer, a privilege usually reserved for men. Provocative but heartfelt, Zaltash’s performance epitomizes the intersection of cultures and traditions in Bristol’s wider population, while revealing that these things remain in flux and motion.

Bristol is not a city starved of music or culture, and despite the presence of social and economic divides, Sanctum cannot be read in the usual rhetoric of an artistic practice aiming to heal cracks in society.

On the surface, the project could easily be a mournful exercise in nostalgia, reviving a broken place of worship, recalling some imagined past-perfect community. But a few hours inside the work reveals the messiness of it all: the mashing of musical styles, the inharmonic transitions, the clutter of bodies. It is less resurrection that is at stake, than, to borrow Gates’ terminology, “amplification”.

It takes a provocative act, in a public lecture at the concert hall of St George’s, to demonstrate Gates’ astute grasp of the context of Bristol and a critique of the celebrity attached to his name. For 30 minutes, he refused the role of pedagogue, and instead recited gospel hymns from memory, calling upon this most formative influence on his practice and inviting the 500-strong audience to respond in song.

For a drawn-out moment, there was shocked silence in the hall (some even walked out at this point). Then a lone voice sounded. Then another, until many joined to recite a verse of Amazing Grace, creating a fleeting but powerful communal voice.

In response to questions, Gates stated: “Those who manage the city want only one outcome and that’s a fiscal outcome […] Bristol could be more rich, more complicated.”

Sanctum acknowledges the complexities of the city – its people, its artists, its laylines and its modes of production – reorienting its audience towards a future and the creation of new temporary communities, whether that be those who spill out of the pub at closing time to catch a reggae orchestra, the insomniacs who gather to hear a harpist at 4am or the office workers who drop in during their lunch break for a slice of spoken-word poetry.

It’s not every day that a city hears itself reflected back.

Disclaimer: Rowan Lear is a freelance coordinator on Art Weekender Bristol & Bath, a festival across two cities, of which Sanctum is a part.