Time to grow up? I'd rather stand up and be counted - a-n The Artists Information Company 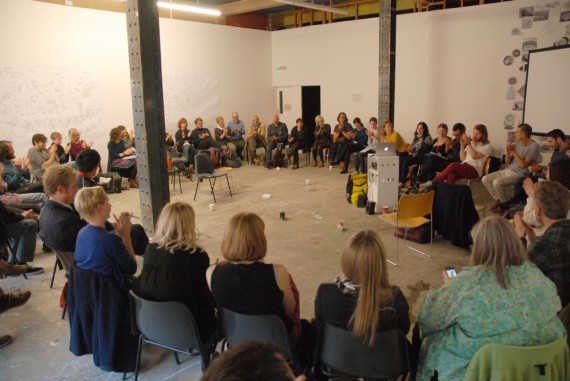 With the visual arts landscape continuing to change as the austerity agenda stands firm, is now the time for us all to get real, accept the new climate and embrace the neo-liberal reality? Put another way, as the title of a recent two-day conversation hosted by The NewBridge Project (NBP) in Newcastle had it, Do we need to grow up?

Presented as part of NBP’s fifth birthday celebrations, the event was a response to the problems that it and other artist-led projects in the UK are facing. Problems like financial insecurity and how to cope with it; gaining support from and managing the expectations of funders and local authorities; and what to do when your building gets taken from you for redevelopment.

NBP’s 80 studios, project space, book shop and performance space are located on a block of land in Newcastle’s city centre along with several other arts projects including Vane, Tyneside Cinema’s pop up space, Globe Gallery and artists’ studios such as Ampersand Inventions and The Northern Charter in Commercial Union House.

At a conservative estimate around 200 artists are supported in this block, which is owned by the global real estate and investment company Reuben Brothers. Newcastle City Council is currently in negotiations to unlock this space for redevelopment.

One of the aims of the conversation was to explore various models from around the country and Europe, and to share experiences and insights. There were representatives from different artist-run projects including East Street Arts in Leeds, Grand Union in Birmingham, Star and Shadow cinema in Newcastle and NAC Foundation in Rotterdam.

The second day was more focused on local issues within the wider political and economic setting, and we heard speakers from Newcastle City Council, Arts Council England and Newcastle and Northumbria universities. This was where you might say the conversation got a bit ‘grown up’.

No money for culture

Andrew Rothwell, culture and tourism manager at Newcastle City Council, let us know quite plainly not to expect much support from the local authority. There was no money for culture, and seeing how it isn’t a statutory requirement and there are only two people in the Cultural Development department, we are all going to have to learn to stand on our own two feet. He put it more gently than that but it was still pretty sobering.

In a neo-liberal environment where everyone has their eye on the bottom line and local authority budgets and cultural departments are disappearing, we are asked to look to philanthropic sources of income. But, as it was pointed out during the discussion, it can be hard to find a philanthropist who isn’t also a philistine.

John Tomaney, professor of urban and regional planning, University College London, talked about big institutions getting sponsorship from oil companies. He had no qualms about this – where are our sponsors, he asked? Our artistic values have to change to meet the needs of funders. But how, he asked, do we reconcile this?. And should we reconcile?

One contributor suggested that business needs us – it needs our ideas and creativity and we should allow ourselves to be ‘tapped’ for this. But is the end product of this approach a city that becomes a completely devolved private corporation, managing its own affairs just like a big business, with arts and culture just another division of Newcastle Corp?

Maybe good things can come out of art and business working together, but the idea of being tapped made me feel a bit ill.

Tom Warburton, director of investment and development at the city council, had the most difficult job of all the speakers. He was there to give an update on the Reuben Brothers’ negotiations. Many of the attendees were studio holders and wanted to know how long they had before they’d be forced to leave.

What they wanted to say but didn’t was: ‘You are happy to use culture to sell the city to foreign investors but how willing are you to help us when we need you?’ You could feel the tension in the room and see it on Warburton’s face.

We were reminded again and again by the representatives from the city council and ACE that culture is a driver for urban growth and some artists voiced their frustrations about this. What were we talking about when we used the word ‘culture’? Is art just seen as an activity, a way of making money? What about actually paying the artists who create all this culture and growth?

The problem for NBP and projects like it across the country is that most of the stuff they do is hard to see. Unless you have a shiny, glass-fronted space where the public can consume a neatly packaged product, those with power struggle to see the value – the contribution that a repurposed office block full of studios actually makes to a city is not immediately clear.

This is the difficult side of art – people need time and space to produce it and there aren’t always tangible outcomes.

But there is room for optimism. Imagine if we worked together to voice our concerns, influence policies and made a case for artists in urban spaces? What if we saw to it that more public money (our money as the ‘social activist’ Chris Erskine reminded us) got spent on culture? What, for instance – as the writer and former New Left Review editor Alex Niven asked – would a Corbynite Newcastle look like?

So no, we don’t need to grow up – not if growing up means compromising our values or forgetting why we became artists in the first place. We need to stand up and be counted.

Do We Need to Grow Up? was a two-day conversation hosted by the NewBridge Project, Newcastle, 10-11 September 2015. For a full schedule and list of speakers go to thenewbridgeproject.com/2-day-conversation-do-we-need-to-grow-up