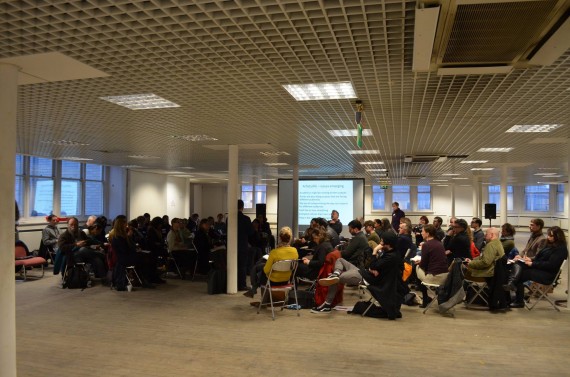 Today, the arts and culture ecology negotiates a domain of the international and transcultural, making local to global connections, fostering new dialogues. As creatives we have to (re)think the process of art practice to work collaboratively, and in partnership, in order to make things happen such as research, publications, and projects, where this piece of writing is a clear example, contributing to a larger body of current, on-going interdisciplinary research.

This month, I was awarded a Writer’s Bursary by a-n The Artist Information Company to write about the one-day discursive event ‘Artists Working within Higher Education’, part of the AHRC funded research project ‘Co-producing legacy: What is the role of artists within Connected Communities projects?’. It took place at New Art Spaces Federation House in Manchester, a temporary, dynamic, multi-purpose pop-up venue for emerging North-West artists, and was run by Castlefield Gallery, University of Sheffield and a-n. After writing over 3,800 words of notes from the day (that are currently housed on my personal blog), here is a more succinct and critical response with key thoughts and themes.

The event was two-fold. It firstly provided perspectives on past and current artist-research-Higher Education relationships from Kwong Lee (Director, Castlefield Gallery), Steve Pool and Kate Pahl (Co and Principal investigators for Connected Communities), Jeanie Scott (Executive Director, a-n), Vanessa Toulmin (Director, National Fairground Archive and Head of Cultural Engagement, University of Sheffield), James Oliver (Senior Lecturer, Centre for Cultural Partnerships (CCP), Faculty of the VCA and MCM, The University of Melbourne), Steve Swindles (Professor in Creative Practice, Director of Research, and Director of Graduate Education, University of Huddersfield) and Paul Evans (Artist). Secondly, it gave an opportunity for current thoughts and reflections from the audience all focussed on ideas from ‘Connected Communities’ – designed to understand the changing nature of communities in their historical and cultural contexts aiming to not only to connect research on communities, but to connect communities with research, bringing together community-engaged research across a number of core themes, including community health and wellbeing, community creativity, prosperity and regeneration, community values and participation, sustainable community environments, places and spaces, and community cultures, diversity, cohesion, exclusion, and conflict.

It was a diverse audience of creatives from artists to researchers, curators to gallerists, writers to theorists, PhD-ers to academics, some of whom wore one, more or all of these hats…where I consider myself the latter, often with not enough hooks to hang them all up on! Already, this snapshot of the many roles in the current UK arts ecology, that was visually illustrated in an infographic by artist Emily Speed in a presentation by Executive Director of a-n, Jeanie Scott, indicated a want from creatives to understand the way in which others have, and can, work collaboratively to facilitate practice as, and practice-led, research projects. Jeanie also stated a want to see how HEI’s can devise modules within their courses that aim to future-proof artists, and how we need to be having conversations about “value” from all angles. What does “value” mean in the arts today? #payingartists

Steve Pool and Kate Pahl stated that “co-production” was a key word in the research’s process, as were the definition of terminologies, and the importance of acknowledging that there will be “loss” in the process of practice as research as “Each has something to lose”. This notion resonated throughout the day and opened up repeated audience discussion – ‘it is the process of temporary stepping out…the potential for an artist to lose part of their practice, their identity through working with a HEI. There is potential to lose control of something in a project, as it is more shared and collaborative. It is about balancing. The researcher has the same to lose.’

Vanessa Toulmin spoke of her experiences of running ‘Festival of the Mind’ in 2012 and 2014 stating that ‘when you work with people you play to their strengths and let them lead and do what that need to do’, again reiterating the notion of “loss”…part of the process is ‘losing independence, ideology, what your idea is actually about…loss is a good thing as you can gain a lot through seeing through other eyes. True collaboration is being able to see through others eyes and acknowledging difference between artists and academics expectations.’ I felt like the six themes that framed the 2014 festival – change, chaos, global, joy, resilience and urban – encapsulated the current climate of research across UK HEI’s at the moment. She concluded on the festival’s methodology festival’s methodology – “EVERYTHING WE DO IS RELATED TO EVERYTHING ELSE” that became a starting point for James Oliver’s open platform discussion.

James decided to try and shake up the format of the presentations by asking the audience to turn their chairs to all face the centre of the room where he was standing in order to ‘get us to re-imagine the room and the physical relationships within the room…how you view and see each other.’ Focussing on “practice as research”, he spoke of it as binary in form, with inherent power relationships. ‘Binary is more about a questioning scenario and dichotomies, binary as oppositional, loss and gain with external and internal tensions. Everything is related, but not all relationships are equal.’ He proposed to the room that we don’t think in binary…we think dialectically meaning in relationships, relationships of meaning and power. Binary is a negative way of looking at relationships. For academics in the room, it is about reflexivity of practice where there is no one size fits all. How are meaning and power played out in relationships? It has to be a conversation and collaboration.’

Next was Steve Swindles who questioned what the new partnerships and new ways of working are between artists and HEIs, and how you hold onto your artistic identity. He stated the artist and academic relationship is ‘like inviting a foreign guest into your household…you in the household have to accommodate this guest. What happens is that foreign guest starts to disrupt the daily routine so you start to do things differently…disruption to do things differently.’ “Disruption” then became another common issue throughout the afternoon conversation alongside “loss”.

He went on to define the artist-research-Higher Education relationship, specifically the relationship between artist and academic, using Chantal Mouffe’s theory of ‘agonistic pluralism’. In order to achieve a creative democracy we must try:

‘…to present a new way to think about democracy that is different from the traditional liberal conception of democracy as a negotiation among interests. Jürgen Habermas and John Rawls believe that the aim of the democratic society is the creation of a consensus, and that consensus is possible if people are only able to leave aside their particular interests and think as rational beings. However, while we desire an end to conflict, if we want people to be free we must always allow for the possibility that conflict may appear and to provide an arena where differences can be confronted.’ – Chantal Mouffe

Again, this highlighted the need to acknowledge “loss” hand-in-hand with artistic “disruption” and “conflict”. As the audience went on to discuss, ‘Disruption always occurs…it is the points at which things rub up against each other. “Disruption” as part of the ‘Connected Communities’ research project was the use of technical terminologies and the understanding of these. The artist’s role is constructed in a specific way, where they will have a specific understanding of “disruption”. ‘

Finally Paul Evans spoke of his first-hand artist-in-residence experiences working with The Leverhulme Trust. He raised questions, such as what is the role you have as an artist coming into a institution? What name do they give you? How do you negotiate the subtle differences between art practice and research? Concluding that in actuality the differences aren’t that subtle, as we had all noted throughout the day.

In part, there was an overriding Manchester and North-West-centric opinion presented throughout the day, somewhat expected, although the audience came from all across the UK, some with incredibly global, transcultural backgrounds that you could see had influenced their understanding of the artist-research-Higher Education relationship and experience. There was barely any speak of the international experience, which for HEI’s at the moment is their largest area of development in a creative, partnership and business sense. Therefore, for me and i know for others, the event only touched the surface of the different ways in which artists have, and can, work with HEI’s.

Ultimately, it is about “space as a possibility” where embedded within the layers of international and transcultural connections, we must create change, change dynamics and acknowledge “loss” to reimagine the rooms we are within and the hooks we hang out hats on to create positive “disruption” and “conflict”.

Dr Rachel Marsden is a curator, research, educator and arts writer, researching cultural and social translation and curatorial practices in China and the Asia-Pacific. Also, focused on practice-based research and the development of "pedagogies of practice" and cultural leadership. Currently, she is Lecturer in Practice-based Research at the University of the Arts London (UAL) (part-time); Associate Curator for Culture Coventry (Herbert Art Gallery and Museum) (freelance), and Governing Board Member for China Residencies (New York/China) and NPE Artist Residency (Singapore) (both voluntary). AKA #wordgirl, seen making books and living with invisible illness. Based in Stafford, Coventry and London.