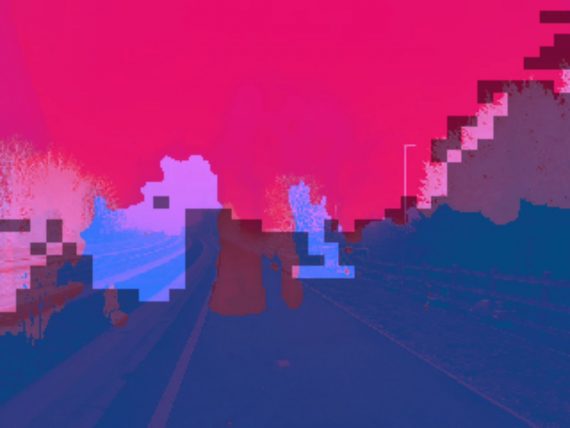 NM: What was the thinking behind Bus Lane Archaeology?

SS: This exhibition has come about through the inability of the artist to alight at Luton railway station due to the lack of lift access, resulting in the need for disembarkation at Luton Airport Parkway. Then a ride along the Luton Bus Lane, accessible to buses, bicycles and mobility scooters. This allowed the artist to explore the contemporary take of disabled flaneur, who rolls along the bus lane, exploring the unique psychogeography of the landscape. The repeated journeys and collection of observations, finds and fauna identifications were logged. Resulting in a mapping of the space and its conflicting and abundant usages.

NM: The title of the bus lane archaeology suggests an unpicking or investigative process, what are you investigating?

SS: I am conducting an evidence based investigation into the use of urban space that develops into a narrative.

JR: “In Transit” as well as a lot of my other work explores everyday surroundings looking for beauty and “moments of wonder” – the hidden gems that often go unnoticed because they form the part of our everyday experience.

NM: What audience do you make your work for?

MH: Anyone who has an interest in the subject matter, however, the work has been made considering others who have faced similar challenges or struggles through being disabled.

JR: I wanted to make a piece that contributes to the ongoing efforts to change the public perception of Luton – so it is directed at local residents. I was quite surprised when sometime around 2006 some poll results were announced which dubbed Luton the worst town in the UK – apparently by its own residents. I want to change that mindset.

NM: Give me four words to describe your practise.

MH: Working with other fantastic artists and seeing the arts and culture sector in Luton thrive. / Seeing Lutonians deny its existence and refusing to engage with it, whilst moaning that “nothing ever happens here”.

JR: Making art work, working on my projects – regardless of the medium, even if frustrating or painstaking – makes me happy – I just love making art. It was a process – in the beginning I frequently had to force myself to do something, now it comes naturally.

I frequently get frustrated when developing new projects – my skills and available resources can’t keep up with my imagination! That is why I prefer to work on long running projects – that gives me the ability to step away, seek new inspirations and knowledge.

NM: What is your greatest worry as an artist?

JR: When I have my “art” hat on is when I’m most free of worries, actually but I guess that at some level I worry about being able to sustain the level of output going forwards. Being “an artist” is a relatively new experience for me, and I find myself devoting a lot of time to management and admin which eats into the time I have to make art (not that these tasks are not enjoyable).

NM: Why Do you work with textiles?

SS: I could no longer go walking, cycling or camping and was told to get new hobbies. This is the medium I was surrounded by and to hand. The development of my practise was related to feminist theory, the art versus craft debate, postmodern theory on material use, the slow movement, sloppy craft, craftivism and to be a Sew N Sew in the world of art. Drawing and painting ceased to have relevance to me.

MH: I’ve always been drawn to the use of textiles, it’s so versatile, I can create 2D, 3D and everything in between with fabric and stitch.

I find that an image or idea can come across much stronger in textiles/mixed media. The tactile element of this technique can also better arts access to those with poor sight or learning difficulties.

NM: The banner work by Sew N Sew reads like an abstract poem, was this intentional?

SS: I had no idea how the work would look. As it was made in my living room while watching the Brexit court case and Absolutely Ascot. It was made in strips and pinned onto the wall. There was nowhere to hang it up until it got to the gallery. I am interested in how people use language. By placing the words that the bus lane spits out and putting them in a group. The viewer makes little gestalts in their mind of the words. They coming up with humorous combination or concepts about what is going on in the bus lane. Some are sad, funny, obvious, narrative or inexplicable. 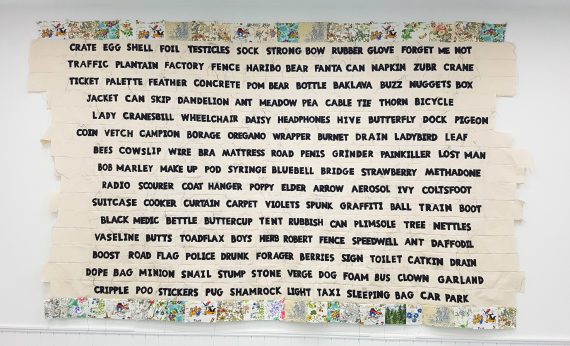 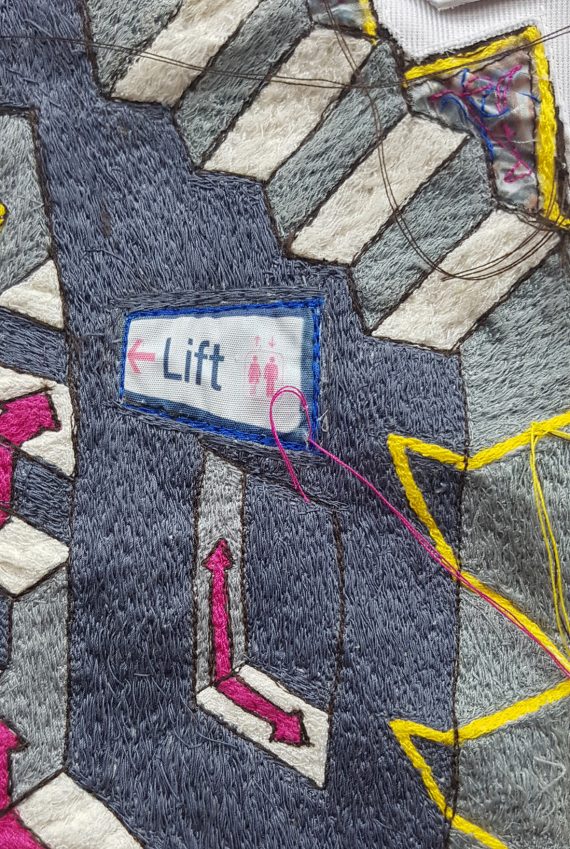 NM: Mary’s work Stairway to Hell, is playful and political at the same time, what reaction are you trying to provoke with this work?

MH:  I am investigating what it means to be faced with everyday challenges, knowing how these can be addressed, but feeing powerless to do so.

I want to share that frustration with people. In the hope that others can relate and in my own small way, I want to challenge those that have put us in this situation.

NM: How did the “In Transit” project come about?

JR: I started making short video art projects in 2014/15 and at the end of 2018 made a video entitled: “Transit” – it explored the theme of commuting, the idea of place and transition through it. At that time I was commuting daily for work between Luton and Dunstable and documented my travels with short videos and sequential photographs. In early 2019 I applied for a Revoluton Arts Kickstart Commission with an expanded vision for the project – the result of which forms my contribution to the “Bus Lane Archeology” exhibition. This is very much a living project – I’m in the process of making further parts which are going to be screened at the Departure Lounge during the exhibition. 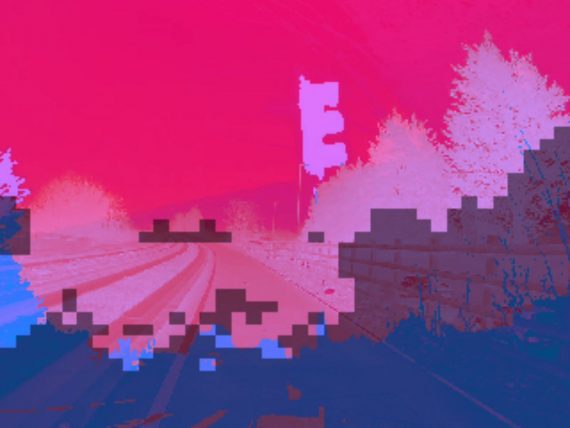 NM: The ‘In Transit’ film work fragments and distorts the landscape, sublimating the real space into what?

JR: The idea behind the video, as outlined prior, was aimed to change the perception of the town (without making an advertisement). The landmarks are pixelated and disappearing quickly so that the viewers can catch a glimpse on second viewing but it was meant to re-imagine the POV of a commuter frequenting the same route – in such a situation the observer is desensitized having seen the same scenery multiple times, catching fragmented elements of the scenery. Another reason for such a heavy distortion is to glamorise Luton in a subversive fashion – only residents make out the silhouettes of Luton’s landmarks and anyone who is not a resident will not know that it was filmed in Luton until they see the end credits which state – “filmed in Luton and Dunstable”.

NM: Several of the works are dealing with the notion of public space. Public spaces should be built to be neutral shared spaces, do you agree?

SS: Most of the time the public sleep walks through what they believe to be public space. But increasingly governments and private companies control peoples’ access to these areas. Marginalised groups do not experience public space in the same way for example through accessibility, rights to protest or the homeless banned from sitting in private shopping centres. The bus lane shows contradictory evidence of use as a, green transport channel, community recreation for cycling, migration stop off , area of substance abuse , artist playground, urban regeneration with development,  homelessness, and green corridor with developing biodiversity. It is a mirror of the contradictions of our modern urban living. Each group experiencing it differently based on their hierarchical position in society.

JR: I absolutely agree with that statement. That’s what communities are built on and that’s how social cohesion is enhanced. I welcome the developments which have been taking place in Luton town centre in the last few years – I believe the work that Luton Bid are doing have a great value to improve public spaces here.

NM: Does making art in Luton change/affect the way you work or what you produce?

Working with such a vast mixture of people day to day keeps you on your toes. One day I will be working with children with learning difficulties or those with mental health concerns, and the next I will be at an artistic networking event or exhibition, where you must be a completely different version of yourself. – I don’t see this a negative at all though. Learning to speak the language of your surroundings is a real skill that I have learnt fast living and working in Luton.

JR: Absolutely! My work is about my surroundings and it is very much location-specific and location-driven, especially that, being an immigrant, my perception of the town and the themes of place, belonging etc. are very close to my practice.

NM: Is an artist’s role in working with communities to make art or to fix problems?

MH: Both! I think the act of making art with communities is a very small act of rebellion. A group who are encouraged to get their ideas and thoughts out in a tangible way can be really powerful. Not just for the individual, but for the community as a whole. Small beginnings can lead to some big changes.

JR: I believe that artists working with communities have a vital part to play – not in providing answers but posing the right questions, starting discussions about problem resolution and initiating the discussion. This can contribute to problem resolution but can rarely be the sole force behind resolution of a problem.