In a previous tutorial with Anne-Marie, I was told about Tracedown – which is a form of carbon paper for artists. I have to admit that I was sceptical about it – partly from my own sense of internal ‘snobbery’, […]

Recently, I had tutorials with both Jane and Anne-Marie, both of which offered different and useful insights on my work, and how I can develop it further. These are the notes that I made: Tutorial with Jane: Riso-printing (a technique […]

The above image shows the completed drawing of the third endangered plant from my list: Acer pentaphyllum. As this was another plant which only had a herbarium specimen photo for me to reference, I did the drawing using the pen […]

The above image is of the two illustrations I exhibited in Interim. Although it may not be obvious from the outset, I didn’t exhibit the drawings themselves here, rather I exhibited digital prints of them instead. Doing this allowed me to make […]

Over the past few weeks, I have been completing a drawing of the Montserrat Orchid, one of the plants off the endangered plant list. For me, this was the most challenging plant to draw so far – because the reference […]

As I finished a new drawing (For the moment at least) the other day, I have made a new label for it (and for the next plant I will be drawing). This prompted a few changes in the labels, which […]

Update: 14/12/21: I spent a lot of time researching the actual size of the orchid flower, as the images that I have don’t show it, and I found it here: I will use this flower as my next project illustration, […]

(The above images are my illustration of the Catacol Whitebeam alongside the Herbarium Specimen from Royal Botanic Gardens Edinburgh) The Catacol Whitebeam the most endangered plant species in Britain, with only one or two living specimens known, and although it […]

Two days ago, I finished my pen and ink drawing of the Catacol Whitebeam (Sorbus pseudomeinichii). This was the first drawing from my final list of Endangered Plants, and (as I said previously) therefore I felt a certain amount of […]

In my last tutorial, we discussed the more practical sides of my project – thinking about the funding, processes and materials that I need to complete the project, as well as the issues that I have had with my current […]

This image is the current progress that I have made on my drawing of the Catacol Whitebeam drawing. There are, of course, a few teething problems with getting back into using the pen and ink method again, such as the […]

I am very conscious of the fact that all of my drawings take a very long time to complete, due to the highly detailed nature of them, and that my output of work does need to increase somewhat, if I […]

Today I put my watercolour on the wall for the first time, along with its botanical label. As you can see, I have placed it on the wall next to my pen and ink drawing of Cleyera orbicularis, in order […]

Review: 02/11/21: I have done some digging, so that I am able to create a botanical label for this plant, and its name is Echinopsis candicans. It is native to Argentina and is of least concern to conservationists, with a stable population. The above image […]

I haven’t finished my watercolour yet, but I wanted to do an update post about how far I have got with it. I have progressed a lot since I last posted a photo of it, and have come to the […]

It was always my plan to learn watercolour botanical illustration in addition to pen and ink illustration – as it has the advantage of conveying the living majesty and details of a plant – for example, it’s colours and small […]

When learning botanical illustration, my first (and main) port of call is researching the works of other illustrators and attempting to emulate the detail and precision that they achieve in their works. This is a very different way of studying […]

From 15th – 21st October, I had residency of the Project Space in the R206 studios – which gave me a space to exhibit my now complete illustration of Cleyera orbicularis. I was slightly apprehensive of the idea of exhibiting my work, […]

Review: 27/10/21: I am still incredibly proud of this drawing – I think particularly because I have accepted the ink blot as part of the work. Although it removes some of the accuracy from the drawing, it doesn’t detract from the image itself, […]

A crucial part of my degree project is botanical illustration, as the means of disseminating the visuals of the plants that I am researching. I am therefore in the process of learning traditional Botanical Illustration, and have chosen to start […] 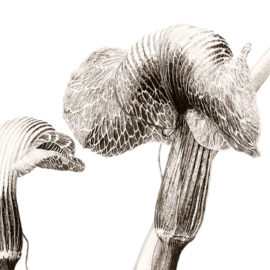 Botanical illustration in the modern world – exhibiting in the midst of a global pandemic!

I have started to think more about my hybrids and specimens more in depth, as while I enjoy drawing them I want to start to explore them more fully. One example of this is how they reproduce. Spores instantly sprung […]

While my residency does not begin for another month or so, I have been gathering more research, ideas and inspiration on the meantime. Although I was aware of the Biodiversity Heritage Library, I have only recently revisited it as a […]

Documenting my practice as an artist, while also juggling a full time job and my personal life. Account Executive by day, Artist by night.