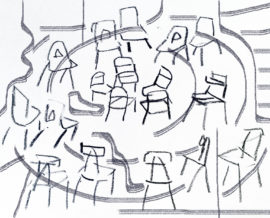 Research informing long-term projects on the relationship between voice, improvisation and architecture, looking at notions of community. Supporting the development of the Artist Working Group, a London-based group who meet in houses and galleries around shared meals.