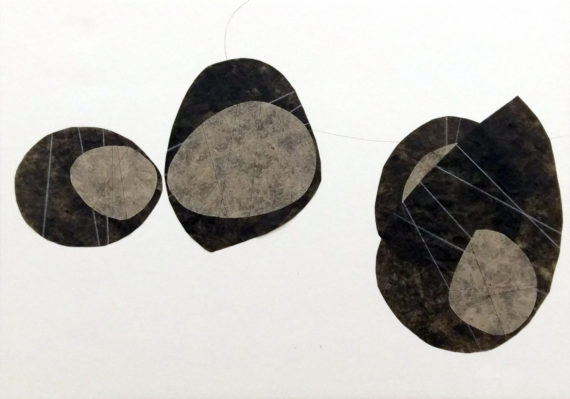 I’m really getting behind on posting about this project – I am not even keeping up with production on Twitter! The main reason is the lack of light and the lack of time. The images are really bad because winter days like today are like twilight all day and the only way I can take decent images is to set up photographic lights in the studio and set up the tripod and just now I don’t have the time or the space! So I am having to just make the best I can of phonesnappery!

Number 30 of 50 Collages Before Christmas, “Like Isis” has nothing to do with Islamic State nor really much to do with the Egyptian deity! The words popped into my head as my hands were fiddling with black ovals and they stuck. Now, the words appeared when listening to Red Snapper’s Making Bones CD and may actually be words from one of the songs but I have not listened again to check and it is music I often sing along to with the wrong words! Anyway, the piece is really about the Jurassic Coast and the continual erosion of the fossil rich cliffs. Here be dragons! 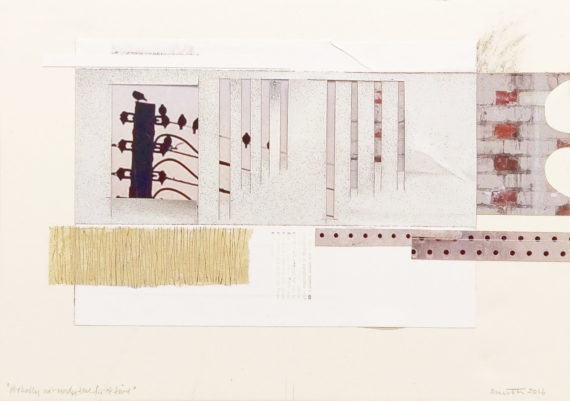 I find it interesting how two ideas can become one. The sprayed and cockled slotted paper was headed for another collage but got hijacked by this. Probably not ready the first time (29/50) is one of my favourites in the 50 Collages Before Christmas series so far and, in a way, is not really in one of my usual styles. It is the sort of thing I would appreciate if another artist had created it, so I think that is a good thing. The reproduction doesn’t do it justice and I really must get set up for a proper photo session soon! 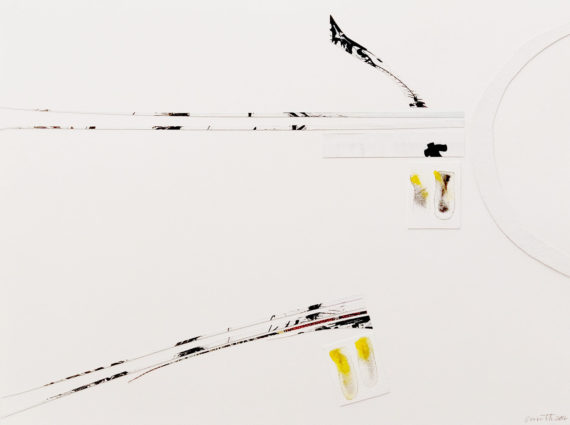 Sometimes with collage you can find yourself adding more and more pieces: with this, 28/50 Collages Before Christmas, I found myself cutting smaller and thinner pieces and discarding lots – but they might turn up in another collage coming your way soon. There is a small sliver of printed matter which is all that is left of what was originally going to form a background to some of the composition. “Nobody Ever Expects That Kinda Stuff” – I certainly didn’t! 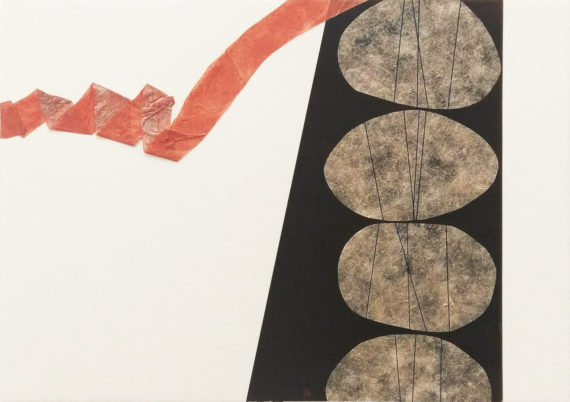 Number 27 of 50 Collages Before Christmas is “It Was Ever Thus (But A Bit Different)“. I suppose it’s from my Tidelines work and has its root in my local Jurassic Coast, especially Charmouth, but these juxtapositions have become continual doodles and reworkings in my sketchbooks and studio tests that they are truly abstract to me and have no connection to place. Well that is what I tell myself: I know it isn’t true. Nearly all my work is about the impossibility of completely erasing the traces of actions or objects so, like it or not, if you have the technology or sensitivity or familiarity with my work you will be able to unravel the full story and connections. 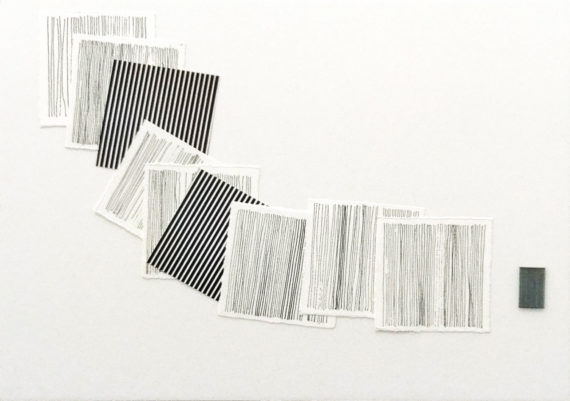 I have a history with black squares and with lines – hand drawn but not ruled, sometimes less straight than I could easily make them – and with photos of lines. I don’t have a history with clips of nails, but found this little cluster in the car park at the studio. I carried it arround for a few weeks, a pocket companion that reminded me of the pebbles and objects Samuel Becket’s character Malone caried in his pockets “And those of which were I wearied, or which were ousted by new loves, I threw away, that is to say I cast around for a place to lay themwhere they would be at peace forever, and no one ever find them short of an extraordinary hazard, and such places are few and far between, and I laid them there.” I on the other hand cemented this to a board and post it for all to see. But that’s ok. It’s not as if, like Malone’s “hard shapely objects” it had become my friend!