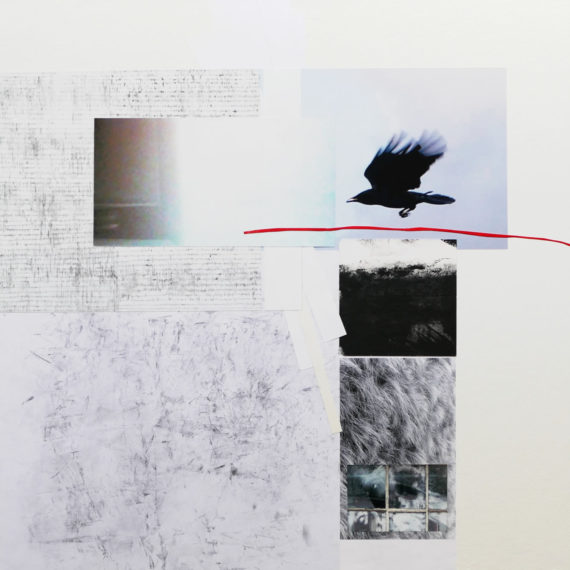 Here’s what happens when the first idea doesn’t work. In most cases when I start a piece of work I have a pretty good idea of what I want to achieve and how the finished piece will look. Sure there is always a degree of chaos that invades my controlled idea: the work gets a life of its own and I don’t fight it, but mostly the finished piece, over all, is pretty much how I envisage it. With collage it is a bit different. I actively use it as a sandbox to play with ideas. Sometimes I have an idea and find the components to create it; sometimes I find an image or a texture or a bit left over on my desk or something I pick up in the street and use it as a starting place; and sometimes I just play until something happens.

With this piece I had a very strong idea involving a crow or rook image in a very vertical composition. I dragged out a previously much used image which is actually a scan or photograph I made of a print of an image I stole from the internet years ago (sorry, person who created the original, that I cannot credit you). I put various things together but just couldn’t make it work. So it added to the clutter in my studio and for a couple of weeks I would poke around at it most days in the hope of breathing some life into it. Finally it coughed and told me it was ready to play and I discarded everything but the rook and the emotional idea I had originally started from. The final touch was the second corvid image bottom right, which is actually a rare thing for me as it is is a digitally manipulated set of images rather than my usual scissors and glue.

The last point above highlights an important aspect of my collage work. I believe many collage artists, from Hannah Höch and Max Ernst though to Robert Rauschenberg and Richard Hamilton, principally started with found images, whereas I tend to take photographs with the specific intent of using them in collage (I rarely alter them in any major way except to correct my poor skills as a photographer). Like Matisse, I also create painted and drawn colour and texture specifically for use in collage. Certainly I also capture, cut out, pick up material – especially packaging – that serves as a starting point but I am just as likely to identify a need for something in a work and go and create it specially or search it out.

The title of this piece comes from an interview I heard with Meredith Monk where she talks of her approach to creating new work. She says she tries to “have beginner’s mind, like I don’t know anything and then begin. And I guess my feeling is, if you do know something then why would you do it? … The idea of making something is to also explore the unknown and make something new for yourself, listening for what comes up that’s authentic and not always accepting the first solution to something.”