The third 600-word review stemming from our workshop at Baltic is by Rachel Marsh, the only writer to choose the group show ‘Animalesque – Art Across Species and Beings’. 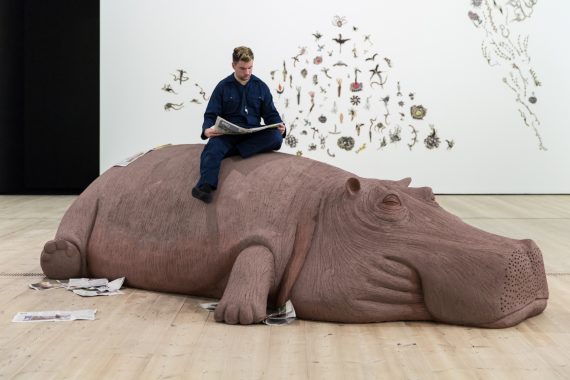 Finding the line between human and animal is usually the role of evolutionary anthropologists. But the artists in the group exhibition Animalesque – Art Across Species and Beings at Baltic, Gateshead, first explore that line, then dance all over it using myth, imagination and science.

The 17 participating artists come from 11 different countries, with work ranging from the early 1970s to the present day. The work, curated by Filipa Ramos, is similarly diverse, including video, sculpture, performance, drawing, vinyl lettering, collage, embroidery and audio. All explore the relationships between humans and other beings in the natural world, with the threat of the ecological crisis lurking just beneath the surface.

The exhibition opens in a surprisingly light-hearted manner. The text of Annika Larsson’s Becoming Animal (2012) playfully invites me to reimagine myself as a kangaroo: “The idea is absurd yet here you are standing in what may or may not be the outback wearing nothing but fur!” Opposite, two walls of brightly-painted boards reproducing the lexigram-based language Yerkish catch the eye, but at first seem incomprehensible – until I spot the key. Five boards of Amalia Pica’s Yerkish (2018) have been pulled out to spell ‘Hello | Visitors | Look | Pictures | Thank you…’ giving the unsettling feeling that I have been greeted by fellow (non-human) primates.

Ahead is the contented-looking form of Allora & Calzadilla’s Hope Hippo (2005), a life-size clay sculpture that provides a platform for a performer to sit and read a newspaper, blowing a whistle when they find an alarming news story. In 2020 it must be an almost continuous blast. Is anyone listening? Discarded newspaper pages drift in mounds against the hippo’s flanks.

At the end of the gallery, 100 beautiful, nature-inspired forms of birds, roots and strange organisms float across the huge expanse of the back wall in Mary Beth Edelson’s Untitled (1972–2011).  Close-up, these intricate collage-drawings reveal the faces of iconic women – Yoko Ono, Grace Jones, Sigourney Weaver, Mary – entwined and subsumed into nature, becoming pods, root nodes, nuclei, or tentacles. They are both grotesque and compelling; man’s subjection of nature is also a feminist issue. 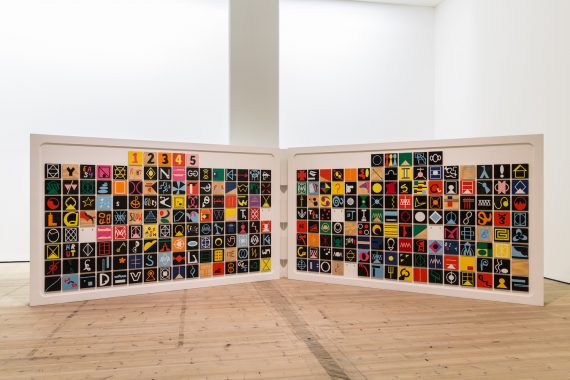 There’s an entanglement of a different kind in Ho Tzu Nyen’s 2 or 3 Tigers (2015), a double video installation enclosed in its own dream-room. Inside is velvety blackness, a deep throbbing beat, and two videos playing simultaneously, face to face. On one side the tiger, floating in space, paws outstretched, incants his history in a strained human voice. On the other, the 18th century surveyor speaks of colonial conquest, his tiger-eyes beaming across the darkness. Their moment of meeting – “We’re Tigers, Were Tigers” – is an intense shamanic experience.

The line between human and animal completely dissolves in Pierre Huyghe’s Untitled (Human Mask) (2014). Here, a macaque wearing a human mask, wig, and blue uniform, shambles around an empty restaurant in post-apocalyptic Japan, apparently working, occasionally pausing and playing with the hair of the wig. Why is this small humanesque creature so horribly disturbing? I could hardly bear to watch.

Marcus Coates’ work, Degreecoordinates, Shared Traits of the Hominini (Humans, Bonobos and Chimpanzees) (2015) may provide a clue. His work presents a series of questions, such as “Do you feel compassion?”, which can be answered the same way by all hominini. This challenges our narcissistic idea that we are a unique, let alone superior species. As Charles Darwin wrote: “Differences are of degree, not of kind.”

This is not a cutesy exhibition for animal lovers – instead it repays careful attention with startling, often uncomfortable revelations. Animalesque, humanesque… the line between humans and animals is itself a myth. We are connected and interdependent. The threat of extinction has become very real, and very personal, and it’s threatening all of us: We are animal. We are myth. We are in danger. Help us.

‘Animalesque – Art Across Species and Beings’ continues at Baltic, Gateshead until 19 April 2020