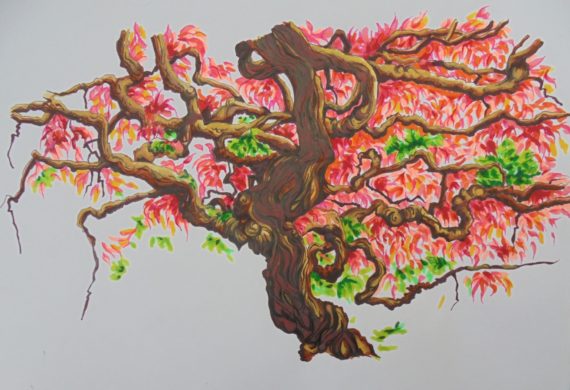 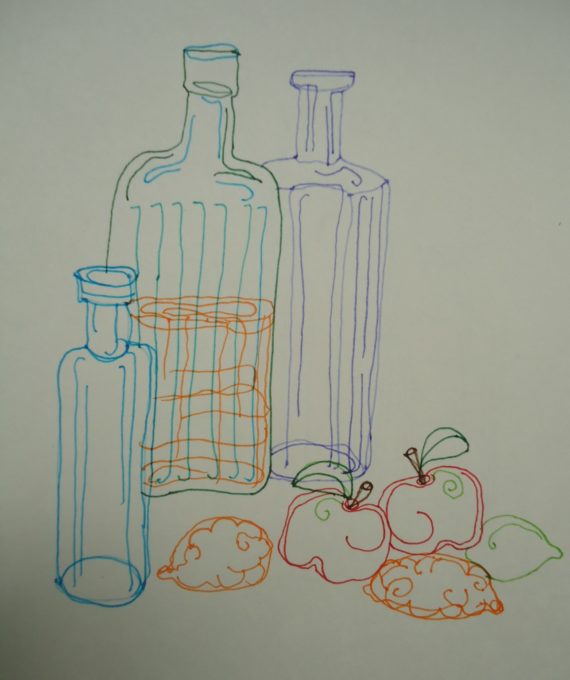 Being a child in the 1950s would probably seem very strange to those living today in the 21st century. However, there were some rather homely and quirky things we used to experience that made us happy. I used to think these belonged to the past, but in these strange pandemic times, perhaps not.

A simple pleasure was walking up to Molesey High Street with my mother to the local clinic. The clinic was just like the other shops in the parade except that it had corrugated glass windows, which made it seem quite special as you couldn’t see inside.

My mother had coupons, I think, to get bottles of orange juice and cod liver oil for me to take as nutrition of a kind. The bottles were rectangular and flat with corrugated sides, like the windows, which made them seem more like medicine. I didn’t mind and Mummy seemed happy.

Sometimes the baker would call at our door with a basket of bread and cakes… what a lovely smell…and Mummy would buy some loaves and cake for me. Then the greengrocer would come with his van and Mummy would buy fruit and vegetables. The butcher also came, I can’t remember what we bought from him, meat probably. And, every week, we had a delivery from Cullens, the grocery store in Hampton Court, they sold everything else Mummy might need. The delivery boy brought it to the back door in a cardboard box and set it on the kitchen table for Mummy to check. It was nice to see these people coming around with their wares for sale. Every morning the milkman came and left bottles of milk on the doorstep, and sometimes the birds would peck the foil lids to drink it. Mummy left out the empty bottles for the milkman to collect.

Every so often we would hear the cries of the Rag and Bone man riding by with his horse and cart, I couldn’t really hear what he was saying but I think he was calling out ‘Boones!’ Mummy never gave him anything but it was nice to hear him passing along the road.

I would sit in the window seat in my little bedroom and watch the world go by – it was quite idyllic. 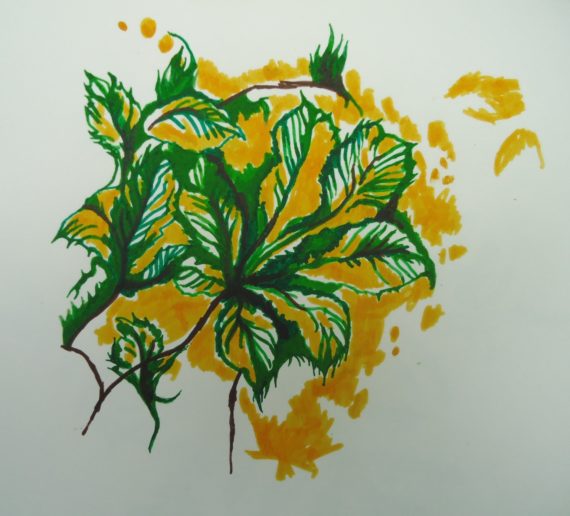 Chestnut Leaves by Carole Day. Ink and brush on paper.

75 Cambridge Road no longer exists, except in my memory. My Grandpa sold it in the 1960s; the lady next door also sold her house and now there is a housing estate of many homes where those two houses once stood.
My grandparents’ house and garden were rambling and expansive, a delight for me as a child. The sensations of the place live in my mind: the smells, the light and shade, the creatures I encountered in the garden, more of a wild wilderness really. Walking down the steep, dank concrete steps to the garden there was a musty atmosphere and it was very cool and dark until I emerged into the light and heat of the sunlit garden. Along the dirt path on the left was an enclosure with geese and chickens, sometimes they wandered out onto the grassy patch opposite, pecking for food. Further on there was a large lean-to with a big, rusty metal tank outside filled with water. On the surface insects skimmed with long gangly legs, and flies buzzed above it. To the right, up a little earthen rise, stood a pigeon coop where my Grandpa kept his pigeons – I think he loved them. Then further along to the right was a row of hutches with rabbits in them. Then a vast expanse of vegetables and fruits growing in neat rows, then a large glass house. Beyond that there was a small coppice leading to an overgrown pond, you could look over a little fence to see it. It was a secret garden full of wonders. I loved it and I still do.
Around the house was a kind of moat, paved on the bottom. Here there were frogs, which I liked to watch and tried to catch. In the front of the house a wide dirt and gravel driveway was bordered at the front by several massive Horse Chestnut trees. It is said that memories before the age of three are probably not real memories at all but incidents that other people have related to us later in life. And yet I remember the sunlight shining through the leaves of those Horse Chestnut trees as I lay in my pram in the front of the house. Many years later the sunlight would again touch my heart and show me a glimpse of eternity. 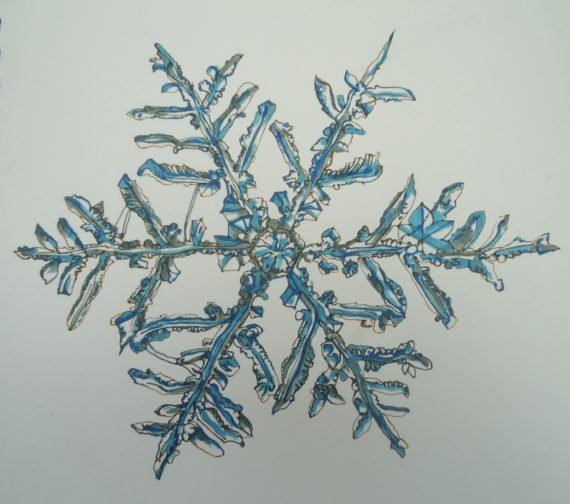 Snowflake by Carole Day. Ink and brush on paper.

A Path through Time
Preface
I began writing these episodes when Edwin, my husband, was seriously ill in hospital with little prospect of improvement. He was in danger for a long time, but gradually, against all the odds, he recovered. Nevertheless, I suppose these experiences cause us to become more aware of our own mortality as well as those of our loved ones, and to reflect on our lives and those pivotal events that define us. This is my very personal story. The title is taken from a quotation by Professor Brian Cox, talking in a television programme about the forces of nature. He was describing the journey of a snowflake falling through the atmosphere to earth and how the varying conditions it encounters on the way create each element of its structure. Every time the temperature changes the shape of the crystal is altered so that each snowflake becomes a template of its journey. Each one is unique, for, as Professor Brian Cox expressed it: “… no two paths through time are ever alike.”
I believe it is the same with people; each circumstance in our lives affects us and makes us just a little more the person we are, so that eventually we are all unique, the result of our own path through time. These pages track those moments that have defined my own journey.
Forces of Nature with Brian Cox. Episode 1 (2020) BBC2: 6 June 10.00 hrs.

I am a Kent based artist working with a range of media. For my MA in Fine Art I created sculptures and facilitated community installation projects using natural materials such as pebbles, flowers, and vegetation. I am also interested in printmaking, drawing, and working with textiles; my current work incorporates these with creative writing to explore ideas of heritage, memory, and loss, chronicling my path through time in words and images.