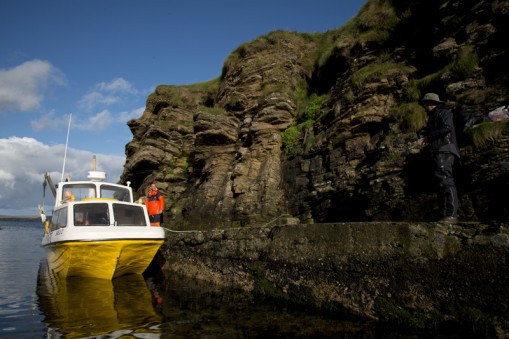 Today we made it across to Swona in a cute yellow boat called Sheila C, captained by two lovely chaps both called Magnus! The crossing from Burray Pier to The Haven at Swona took about 30 minutes and was really good fun. The little boat had two engines and went at quite a speed. We were able to get off easily at The Haven stone pier at Swona (we had been worried about having to wade in with rolled up trousers, but it was all very civilised). Our party included me and my assistant and sound man Ralph (also my husband!), and three archaeologists Keir, George and Alison. The trip today was a success. The island was wonderful to explore. I will write up a more detailed post next week after our second visit tomorrow, with more time to reflect on this special island.

Yesterday the sea was still too rough for us to make a crossing to Swona. Both mornings we had psyched ourselves up – packed the kit, food supplies, dressed in warm layers of clothing and head-to-toe waterproofs – and arrived at the pier, only to receive the message of the cancelled crossing. Yesterday morning felt a bit like Groundhog Day. As the adrenaline seeped away as I looked out to sea, I started to get excited about a day in the warm archive room at Orkney Library in Kirkwall. Swona will have to wait until Thursday now, then surely we WILL get there!

So yesterday was on to plan B, to check out any archive material to supplement all of the amazing information Cyril Annal provided on Monday. Orkney Archive room is a cosy place, which must not have changed in decades. I listened to some Orkney Sound Archives on an old fashioned reel to reel machine. They are yet to digitise quite a lot of their archive. I listened to three sections of an interview with the last school teacher who was employed to work and stay on Swona in 1924. Jessie Aitken was interviewed in 1992 and it was worth a listen. She was 18 when she started her post and lived in the school house on her own sleeping in a box bed, with only pesky mice for company.

Aitken described the simplicity of island life on Swona, but also the sense of isolation and loneliness she felt. She stayed for a couple of years, the main reason she went back to stay on the mainland was for health reasons and lack of food choices! Aitken gave a flavour of the lifestyle at that time and I enjoyed trying to decipher the dialect. I worked out that to remember is to mind something, a church is a kirk and peedie is little or mini. She spoke a lot about the Rosie family and other families on the island. Her parting comments were that the people of Swona were ‘tidy folk, nice folk’. Just as with listening to Cyril on Monday, her stories will bring the island alive for me.

I also looked through the photography archive, and there was very little on Swona. Most of the photographs must still be in private collections or with the families still. Of course, I saw some great photographs on Monday which Cyril had with him in his treasure chest of Swona memorabilia. The two black and white photographs below where my favourite finds from yesterday, especially the one of Edith Rosie feeding the sheep.

The star find in the archive was an award winning essay by Cyril’s son Alexander Annal, which he must have written as a school boy. ‘Shipwrecks of Swona’ describes the key shipwrecks in Swona’s history, mostly from primary sources and stories passed down the generations. It is a very rich account and also contains a fair amount of humour, giving a taste of the importance of the spoils of the wrecks for the islanders’ survival. My favourite story involved the ‘Pennsylvania’ ship, which wrecked on 27 July 1931, on route from New York to Oslo and Copenhagen (pages 6-8). All of the crew survived thankfully, and as was always hoped by the islanders there was plenty of cargo to salvage. In this instance a customs officer was on the scene very quickly and noted the large quantity of Cornflakes boxes (enough to fill a barn). The customs officer ordered Grandad Annal to burn all of the cornflakes boxes by morning. This is Annal dutifully did, but in the darkness of night, emptied the contents into several barrels. Grandma Annal reported that over that year ‘the hens never laid better’!

Today we are doing some test filming and sound recording locally, revving up for our maiden voyage across to Swona tomorrow…

Here is a wonderful guest post (part 1) from my collaborator, archaeologist Keir Strickland:

Hi, I’m Dr Keir Strickland, and I’m a lecturer in archaeology at the University of the Highlands and Islands Archaeology Institute, based up here under northern skies in the Orkney Isles.  I’ve been an archaeologist for approaching 15 years now, but had been fascinated by the past since I was much younger.  Fascinated by its seemingly foreign and exotic nature – in much the same way that I was fascinated by far off lands, so too I was drawn to the past.  Moreover, I was drawn to the discipline of Archaeology over that of History – with the former embodying an apparently neutral physicality that seemed (to teenage me at least) to be so missing from the authored records of that same past.  Archaeology offered a far more physically immediate gateway to the past – the opportunity to hold artefacts that had been crafted, and used, by someone else’s hands years (sometimes a few, sometimes thousands) ago, the opportunity to uncover and piece back together homes, towns, and even entire societies.

This interest initially took me to South Asia, where I studied the “collapse” of civilisations (or complex societies) including the Rajarata Kingdoms of Sri Lanka – and it was this interest in the transformation of societies, and the accompanying transformation of place (with all of its associated significance, meaning, and values) into space that lead to a complementary fascination with the act and aftereffects of abandonment – the abandonment of the Scottish Highlands during the Clearances, the abandonment of northern Sri Lanka following the fall of the Rajarata Kingdoms, the ongoing urban abandonment of Detroit.  The act of closing doors one final time, deciding what to take and what to leave, the decision to leave and the subsequent decisions not to return.  Inherently, all archaeology deals with abandonment – the abandonment of artefacts (whether deliberate or accidental), the abandonment of places – archaeological sites are de facto abandoned places.

Within artefact studies there has been, in the past decade or two, far greater attention paid to the abandonment of artefacts – to structured deposition.  However, within landscape and settlement studies it is relatively rare that we, as archaeologists, specifically study the actual act of abandonment – the interest is always in reconstructing the fluorescence, the occupation and function of a structure, the development of a landscape – and the final abandonment and collapse is often almost seen as akin to a veil that needs to be removed to better reveal the events that preceded them.

Instead, I want to examine that veil – to examine the act of abandonment, the transformation of place to space, and the ways in which we (as archaeologists) define abandonment – how we temporospatially bound abandonment , and how we present that to our peers and to the wider public.  And it is that which I will return in part two of this blog post. 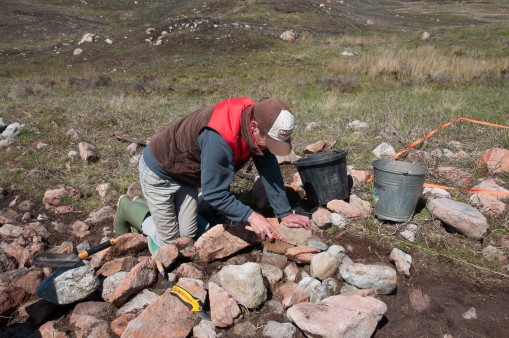 We were due to take a small boat to the island of Swona this morning (Monday 18th August), but unfortunately the weather was not on our side and the dangerous high swells meant we couldn’t sail. We are hoping to try again tomorrow morning but the local skipper Magnus does not look hopeful. The weather gets better later in the week so I’m hopeful we will set foot on Swona soon!

Swona is a tiny island positioned in the notoriously dangerous section of waters called the Pentland Firth. To get to the island you must pass over tidal races, swells and whirlpools, so it has to be a relatively calm day to cross to Swona. The island is just over a mile in length and has high craggy cliffs surrounding it, with a small pier at the ‘Haven’. The island’s name comes from the Norse words, Svíney or Swefney, meaning either Swine or Whale island. Now uninhabited, apart from a herd of feral cattle, the island was populated from Neolithic times until 1974. Rose Cottage was the home of the last two inhabitants. The are around 10 dwellings marked on the OS map, two chapels and one neolithic burial cairn.

Not being able to visit Swona today turned out to be a blessing in disguise as I was able to meet with Cyril Annal this afternoon (who along with his brother is joint owner of the island of Swona). He sat with me for a couple of hours and told me many stories about the islands inhabitants and ways of life. Cyril has an amazing memory for the stories that have been passed down the generations. His grandmother Eva Margaret Rosie grew up on the island and I was shown many photographs of island life from that time. Eva married and moved to nearby South Ronaldsay, but went to stay on Swona each summer. This was to become a family tradition, that carried on so Cyril also enjoyed 6 weeks annual summer holiday on Swona as a boy. I heard tales of survival, love, shipwrecks, hiding away, impatient pastors, a naughty school master and a banished governess. Cyril’s stories are too countless to describe here, but they will bring Swona alive with memories as I finally set foot on it this week. Perhaps some of those rich stories will spill into this blog and my work. If we can’t catch the boat again tomorrow, I’m looking forward to a day in the dusty local archives at Kirkwall Library, discovering more about this gem of a place.