The last day of this year’s residency. Three weeks have flown by too quickly. This is the shortest time I have spent at the Ness of Brodgar but on the other hand it is my first time away from home […]

Many hands helping with cleaning the floor for Drone photography in Structure 10. Meanwhile the cinema in a hut has been taking shape for tomorrow’s world premiere for the archaeologists. Pictures of the event tomorrow.

Today the wind has dropped to a modest breeze – but as a result the clouds are almost static making the sky an overall light grey with just an occasional glimpse of blue. So while the normal strong winds create […]

Most of the day was spent gathering materials to convert a small hut on site into a cinema for Friday’s world premiere of my film about the Ness of Brodgar. This afternoon I made it into Structure 10 for a […]

Today was mostly spent doing a final edit for the world premiere of my film about the Ness of Brodgar on Friday. So just the one drawing today. In Trench J they have reached ‘the natural’ – the earth that […]

Following on with the story of the big pot. Here is a piece now dry enough to be turned over, revealing its decoration. It was removed from the big slab of pot (from the top right hand corner of the […]

After the excavation of the big pot comes the paperwork in meticulous detail. Just one drawing as the day was mostly was spent sourcing technology for my film show next week. Later on with the return of Orkney winds, I […]

This morning there was a gentle breeze, pale sunshine, and big black clouds on the horizon – standard Orkney weather except the wind is usually much stronger. After a personal tour of Structure 10, I drew some of the diggers, […]

There are two sides to my work, practice and reflection. Here at the Ness of Brodgar there is much to draw, paint, and many sounds to record. But I also feel a need to keep a handle on the thinking […]

Previously I have said that human activity is my primary focus. But that is not the whole story. To clarify, it is the place in which people, including myself, are located that is the anchor for my work. That to […]

The first part of the day was spent putting up pictures to advertise the Artists in Residence, in the hope of sales – directing people to my website at karenwallis.co.uk. This was followed by a trip into Kirlkwall in search […]

Today they began an extension to Trench J to investigate more of Structure 5 and the building on top of it. The top soil was cleared before the morning tea break – and a tour of the trench followed. Then […]

Looking out across Structure 12 towards the Loch of Harray. The full extent of the landscape is now visible because, due to Covid regulations, there is no viewing platform  for visitors. In the drawing the sun is shining on the […]

After last year’s cancelled dig, we are all very glad to be back. However, things are strictly limited in order to comply with Covid rules. There is only a small team on site working in a much reduced area of the […]

Dark times, indeed.  Or more like grey-ish in my case.  Despite being fit (at the moment, fingers crossed), having enough to eat and being otherwise secure I have found it impossible to do much meaningful work since the summer. But, […] 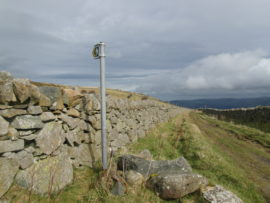 An alternative view of the landscape

Today saw the world premier of my film: ‘Ness of Brodgar 5th edit – work in progress’, which is around half the intended length of the film. It was shown on site, projected on to the wall of the barn […]

Last year and early this season I followed the history of Trench Y, which was meant to be a quick excavation to find the wall surrounding the Ness of Brodgar. They didn’t find the wall – just a few bits […]

Feedback is always good value.  At lunchtime I showed the current edit of my film to three supervisors who are leaving the dig today. As they are all experts in the field, I felt rather anxious and hoped there were […]

No writing today as I spent most of the time on this small oil painting. It is of some unusual stones, which are due to be removed next week. Plus one drawing of work continuing around the drain. More tomorrow…

Today I have been contemplating timing in my relationship with archeology. Sometimes I’m in the right place at the right moment but unprepared. While at other times I am completely prepared but have to wait ages for the right moment. […]

A certain buzz associated with new discoveries on site today. Week 5 of the 8 weeks has been mentioned as the peak of the dig, and it certainly feels like it.  There is still time to explore before the pressure […]

On the necessity of decisions. Today one of the supervising archaeologists said this: If we are not making decisions we are not solving the problem. You have to take a decision when you are digging. If it is a correct […]

No visitors but rain this morning prevented drawing. To use my time, I tried to work on the narrative structure for the film – but found it impossible in a small space of the Art Hut on an iPad. The […]

On Open Day there are so many visitors to the Art Hut that there is little chance of getting on site for more than a hasty sketch. However late in the afternoon, when a shower had thinned out the visitors, […]