A first oil painting on site. One of the benefits of spending a whole afternoon on one piece of work is listening to, and learning about, the ongoing the progress of the excavation – interspersed of course with discussions on […]

Lunchtime on the grass.  This week there are a lot more people working on site, with another group coming next week. Down by the waterside, Trench Y continues to prove interesting. A change in the earth colour and texture suggests […]

After days of sunshine last week, the weather has become more typical of the Orkney I know. It may be cold and grey but the colours and the clouds sitting on top of the hills are a gift to paint and draw. […]

There is progress in Trench Y, down by the water’s edge, where they are looking for the outer wall of the settlement. A test pit revealed what they were hoping for so this has been enlarged.  Obviously it’s early […]

In response to a comment by a-n blogs on Twitter: Do Artists in Residence need a plan? I have decided the answer is no. The whole point of being an Artist in Residence is to interact with the host context […]

Two trenches are uncovering new ground. Trench J has been extended and today they are starting to find bits of pottery. The other is a completely new trench by the loch edge. This is a colour sketch that will be […]

People are asking what my plan is this year. Presumably because it is my third season there is an assumption that there is a clear route, which is far from the case. If I have a plan, it is simply […]

The second day of preparations for excavation, uncovering Trenches T and J. The tyres are removed using a long line or people to roll them to where they will be stacked. The tarpaulin is pulled from the trench and laid […]

The first drawing of the day. The first actions for the archaeologists is uncovering the site by removing all the car tyres that have been holding the tarpaulins down. This is followed by bailing out very unpleasant water. Finally the […]

Preparing to go back to Orkney for my third Artist’s Residency on the Ness of Brodgar. After three days on the road, journey’s end with the ferry to Stromness. Sailing past The Old Man of Hoy, with a strong wind despite the […] 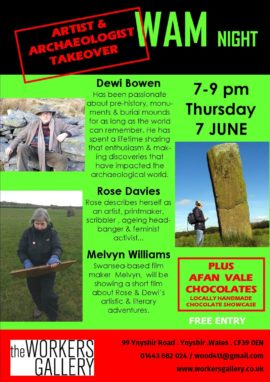 After a few weeks at home I’ve come back to Orkney to collect my exhibition from the Kirkwall Museum and give some talks to schools and the college. It feels like coming to my other home. Down south I miss […]

The dig is over and people who have worked closely together for the past 8 weeks are dispersing all over the world. The ‘goodbyes’ and ‘see you next year’ are quiet but the emotions are strong -unlike the theatre, where […]

Mike talked about the way you see both a long period of time within a structure and a sudden moment. An instance of the latter being where a small pile of stones fell over and were left lying there. It […]

Jim says the 3D photo modelling he is doing is beginning to be used in planning – and saves a lot of time where the excavation is chaotic and difficult to draw. It means they can do a simple plan […]

In Trench T they are uncovering an Iron Age wall around a structure, which is built over, and through, the Neolithic. There must be many reasons why they chose to reuse the site, but perhaps one was that it commands […]

Open Day on site – so I used the need to stay in the Art Hut, to be available for visitors, as an opportunity to play with my collection of stones – now trying a Neolithic version of oil paint […]

Yesterday, a second quick painting of an archaeologist in the trench. At last I am beginning to paint with the same direct approach that I have for drawing. A shame the dig ends next week, just as I’m getting […]

A small piece of flint with a sharp edge has been found in Trench X. It doesn’t fit known examples of flint tools; but, like yesterday’s ‘crayon’ has an indentation for a finger or thumb that facilitates a good grip. […]

Rain today provides an ideal opportunity to review material collected to date. I’m not sure why I’m collecting small bags of crushed stone but no doubt a reason will eventually emerge. Rain also prevents any drawing in the trenches but […]

As this is a long term project, it can feel overwhelming in its scale and complexity (like the dig itself). Despite the fact that archaeology is rooted in the past, my residency is about bearing witness to the human activity […]

There are some pieces of stone which have been uncovered and now the parts with iron layers are rusting. They are difficult to draw and paint because I’m not interested in just rocks and prefer people. My project is about […]

One of the supervisors is feeling that he hasn’t accomplished much in his trench, because it is not only complex but confusing. There is a balance to be achieved between working fast through the midden, to get to the structure of […]

Yesterday persistent rain and mud making an abstract painting on the floor of the supervisors’ hut. Today, bright sunlight creating sharp shadows and the ever present wind blowing clouds into many shapes.