Automatic facial recognition (AFR) is hitting the headlines in the UK because of questions about its use in society. AFR is part of a wider drive worldwide, for surveillance and its associated big data to assist policing and to support security. It is a form of border-making. It is invisible, and its impacts are unknown. Yes, it may assist in catching suspected criminals, but what are the insidious affects on the wider public and their sense of autonomy and freedom to act.

Specifically I’m interested in how the use of AFR in public areas where protests happen, affect the viability of those protests. How the threat of being recorded, your intimate facial biometric details captured, would affect your choice to be part of a protest. Yes, the integral part of being at a protest is to be counted – one of many with a message to be heard. But, there is a difference between being present through choice, and being ‘captured’ by AFR – in this ‘capture’ without consent, there is a power imbalance. A power imbalance which is heightened by a current lack of transparency. My argument is that the use of AFR in public areas creates an implicit power imbalance that is threatening – and to be threatened, is to be coerced – your behaviour altered through fear.

Through this commission with the University of Exeter I will work with academic researchers and people who have protested to produce co-produced portraits that through their process and outcome explore questions around the use of AFR.

I’m running a workshop in a few weeks time. It’s for adults and its a way to discuss facial recognition. We’re going to be making flick books and gif using rubber stamps. Flick books are surprisingly tricky to make considering they’re supposed to be child’s play, but I’m on Tester Number 4 now and definitely getting closer. The restrictions are, that they can be successfully made by anyone, within a 2 hour workshop, and with no specialist equipment, i.e. how many pages can be stapled together? The answer is many more if you have an old metal stapler, which performs much better than my new plastic one.

I wanted to see how the google facial recognition technology works so I uploaded a photo of myself to google images and searched for other images with it.

I wouldn’t have thought to do this normally.. it’s like one step on from googling your name. I really didn’t want to see what results would come up. They all look reassuringly unlike me – hurrah!.. I think… but I can’t decide if that is reassuringly benign because clearly it doesn’t work very well, or not.

Having seen the results, it makes me wonder what would happen it I uploaded a series of photos of myself to see what comes out each time and how similar they are. There’s potential to work with this data and create a series of drawn portraits, to create a “community of me” (even though that sounds unsettlingly narcissistic… ). 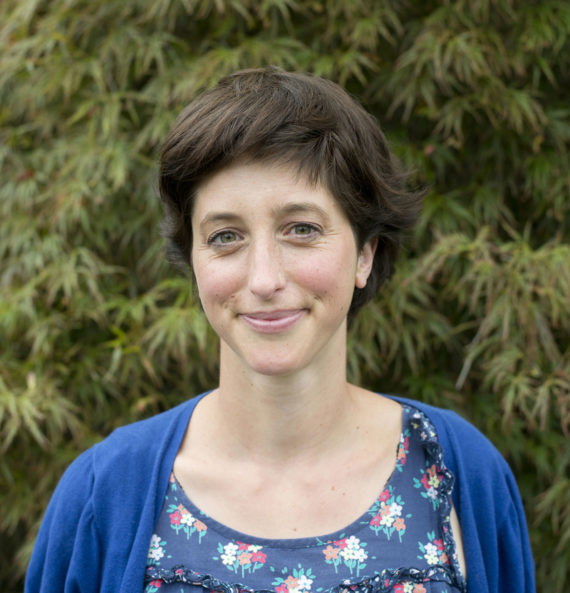 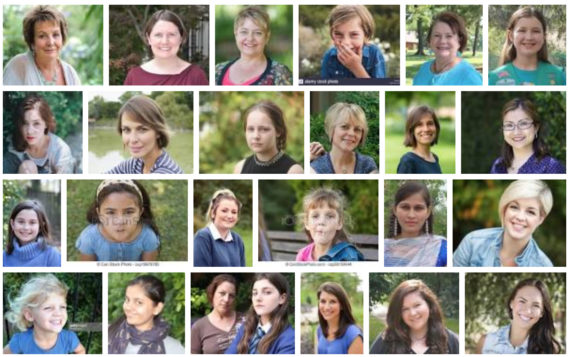 Interestingly a friend sent me this pic from a gallery in Rome this week which looks like my (younger) doppelgänger. It’s eery. 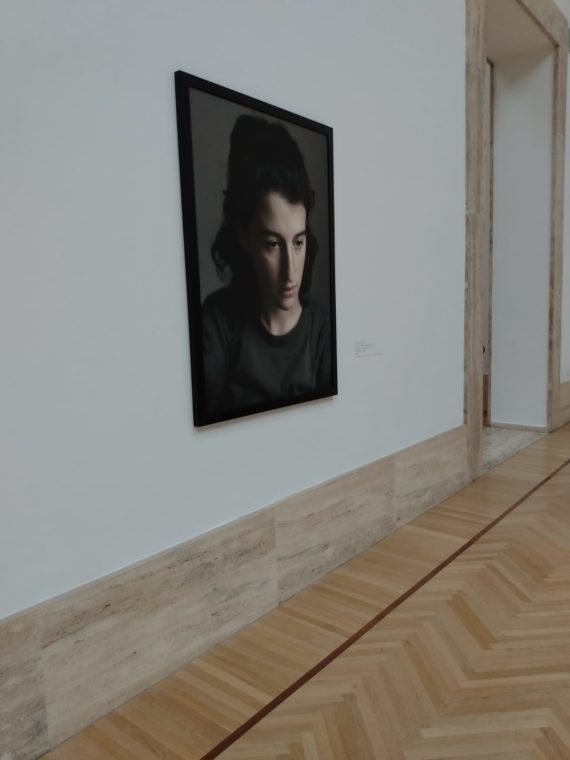 There’s many ways that people are trying to hinder the use of facial recognition.

Most recently seen has been the actual dismantling of cameras during the current protests in Hong Kong.

(Interestingly they echo the toppling of dictator monuments during conflict, such as the infamous felling of the Saddam Hussein statue in Baghdad in 2003. ) 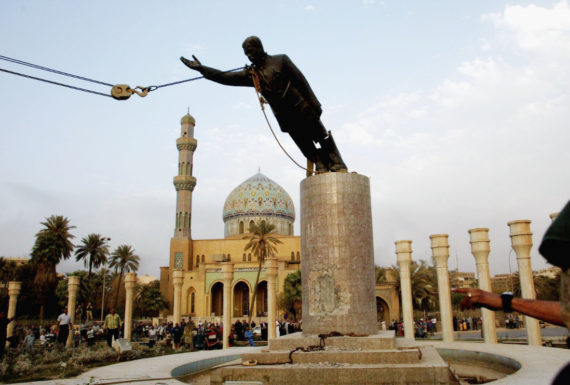 Others try for more subtle routes. CV Dazzle was developed by artist Adam Harvey. In this link he describes how to style your hair and use make up to reclaim your privacy. 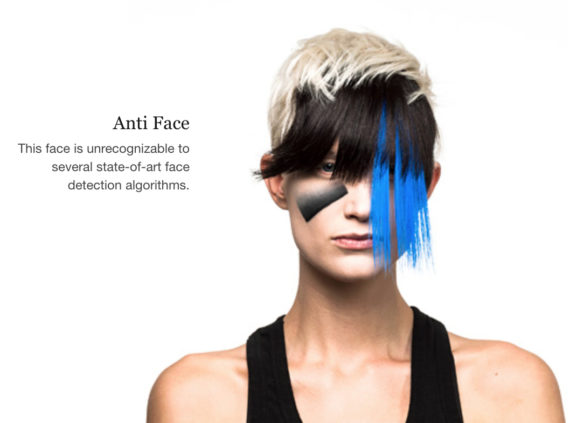 Scott Urban’s sunglasses IRpair and Phantom aim to hinder AFR, one by specially formulated lenses that have the ability to absorb infrared light, and the other which also has a frame that reflects infrared light. See more on this at this article link.

The point of this work is to explore what facial recognition technologies are and how they may affect our behaviour with regards to public gathering and protest.

I have worked with six people who participated in public protest. A few are long-time protesters with a list longer than my arm of where and when they have stood up to be counted. Others are newbies, propelled by our climate emergency to skive school and demand that this urgency be met with a response to change societal ways.

Making the actual placards was really fun, mostly because there was a lot of glue involved and that is one of the top sensory things to do. Also, it was totally new to me. I hadn’t worked in this way and it was exciting to see how the kozo paper (about 20grams in weight) reacted with the PVA glue. I wanted to see how translucent it would go and how far it could be manipulated without disintegrating.

The final objects are rather beautiful with their air bubbles and encased paper, and the layers of translucent screen prints creating a new image – a liminal portrait. One where the identity is, and is not, the person. One that challenges identification. One that encapsulates movement, action and an assertive ‘sitter’.

Early this morning we had the first photoshoot with the photographer Rob Darch and the first protester-participant (an interesting oxymoron). More on this in another blog post. 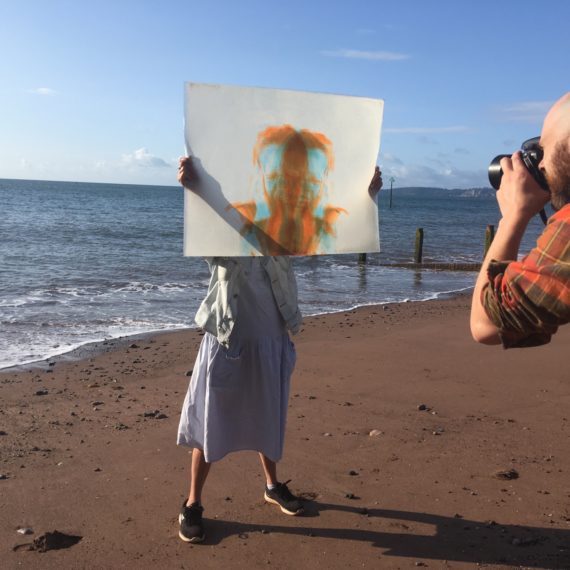 I’m been busy getting stuck in with the making of the placards. Tearing lightweight Japanese paper to size, prepping screens & ink, screen printing the multiple portraits (with George Barron, Double Elephant Print Workshop Screen Tech/Tutor), composing and gluing the multiple portraits together (with Alysa Freeman, maker of jewellery, made by recycling papers, she knows a-lot about glue).

Here I wanted to share some of the pictures from our days of screen printing at Double Elephant Print Workshop, and gluing at our studio. Both involved painty mess and gluey stickiness. 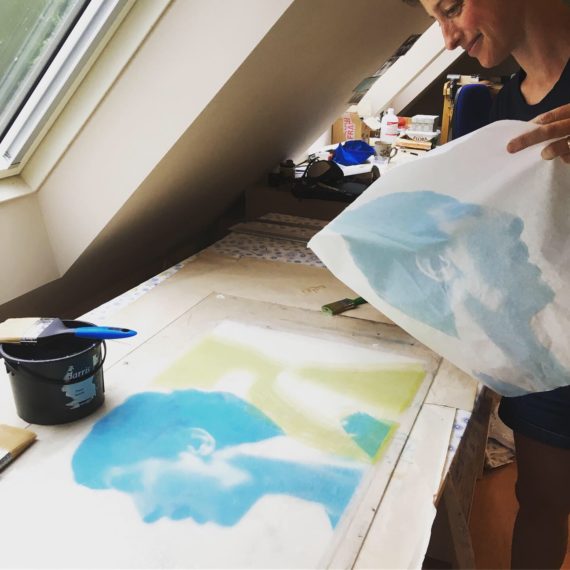